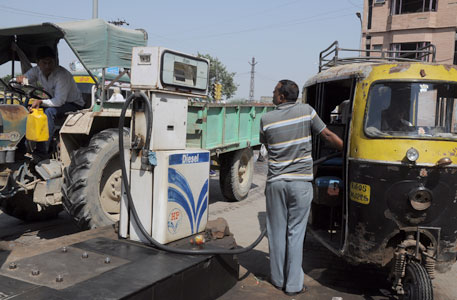 The UPA government has finally allowed oil marketing companies to raise diesel prices in small amounts from time to time until the subsidy is fully pruned. A hike of about 50 paise per litre per month is now expected to roll at the retail end to recover the entire loss on account of having to sell diesel below the cost. This provokes a question – if free pricing can remove the root cause of dieselization of cars, then should diesel cars still be taxed separately?

The answer is yes. It will take a long time to close the gap between the retail prices of diesel and petrol. The promise of periodic price revision also faces the political risk of a roll-back. Therefore, in the interim, diesel cars must pay more taxes for using subsidised diesel. But more importantly, such a tax on cars, to be borne largely by the rich and the upper middle class, can bring funds for cash-strapped refineries to produce clean diesel for all captive diesel users – trucks, buses, generator sets and farmers. The petroleum ministry and the oil companies, burdened by under-recoveries, cannot look away from the public health risks of diesel emissions any more.

For the car industry, this pre-budget announcement on pricing reforms is a relief as it can use this to thwart public pressure for additional taxes on diesel cars in the forthcoming budget. The car industry may argue for fuel price parity as against the additional taxes on diesel cars, knowing very well that diesel prices will not increase significantly in one go for them but slowly over time and in small amounts. There is enough time for the car market to adjust. But the industry has already expressed its worry over a hike of more than Rs 5 per litre, as this can affect their sales volume in the small and mid segments.

The most damning part of the new reform move that both pundits and cynics have glossed over, is that the diesel prices have already increased substantially for most diesel users but not for car users. For all bulk users—transport undertakings, bus transport corporations, railways, defence, mine and power sector—the price has already been hiked by Rs 10 a litre. Cars, the major users at the retail end, will pay only 50 paise more. But the car industry has chosen to hide behind this miniscule increase to block the tax on diesel cars.

Bus transport, which is for public good, is being made to bear a bigger burden of fuel price hike than cars. The government could have taken additional steps to reduce the overall tax burden on buses to cushion the hike. Fuel cost is already jacking up the operational costs of bus agencies. In Chennai, fuel cost is close to 30 per cent of operational costs, and in Bengaluru it is about 40 per cent. Despite providing the same public service, buses are paying more central and state taxes than even the Metro rail.

The Delhi Metro Rail Corporation is exempted from property tax, sales tax, capital gains tax, customs, excise, income tax and more. But the bus pays property tax, octroi, excise, entry tax, VAT, central excise, custom duty, excise duty on consumption, excise and VAT on spare parts, motor vehicle tax, advertisement tax and more. This is mindless.
The forthcoming budget has to set this right. It has to announce additional taxes on diesel cars, and reduce the bulk of central taxes on buses; it has to give an advisory to state governments to do the same. Fuel taxes must also be rationalized to bring parity between diesel and petrol prices.

The government cannot dismiss environmental fears over air pollution and cancer risk from growing dieselization. The desperation for a solution is clear from the recent Supreme Court notice to the government for action in Delhi. The court has responded to the interim application in the ongoing public interest litigation on air pollution. This has drawn attention to the recent reclassification of diesel exhaust as class I carcinogen by WHO’s International Agency on Cancer Research.

The application has also drawn attention to the current emissions standards that allow diesel cars to emit more particulates and nitrogen oxides; the fact that there is still no official timeline for clean diesel (10ppm sulphur) and clean diesel technology nation-wide and Euro VI standards that make emissions from diesel and petrol vehicles comparable.

This proposed Delhi-centric model requires nation-wide resonance. Instead of resisting this directive, both the Union and state governments should draw up an action plan to put fiscal brakes on dieselization of cars, get additional revenue to fund clean diesel for all, and scale up public transport to reduce overall car usage.

Our calculation shows that if the proposal by Kirit Parikh, the former member of Planning Commission, is modified to impose a two slab additional excise duty on new small and big cars at the current and increased rate of dieselization, it has the potential to get at least Rs 70,000 crore by 2015 and significantly much more subsequently. This can meet the one time investment for 10ppm sulphur diesel and also help scale up alternatives to cars in our cities.

Fuel price reform is inevitable and necessary. But clean fuel and public transport agenda for public health protection must not be derailed. Political tokenism on fuel subsidy for diesel cars has to stop.