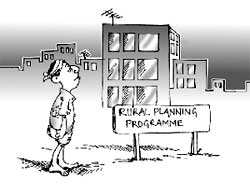 the rural planning approach in India has mainly been one of trials and errors. Piles of documents are gathering dust in the national archives to substantiate the belief that the reforms in the countryside have not been based upon a well-researched positive and integrative approach to village life. The main reason behind the policy failures in poverty alleviation and the blatant misuse of the village resources has been the segmental dealing of the village system. Village governance has been constantly compromised to maintain the conceptual dichotomy between agricultural development and agrarian reforms prevailing since the colonial times.

Village development since the British era has been based on two central tenets: Firstly, the bureaucratised science, more appropriately referred to as the 'idealised textbook image of science'. It focused on mechanised farming for high yields rather than the sophistication of indigenous knowledge of the local farmer. This ensured dependence and support to the markets of the advanced societies but alienated villagers from their land.

Secondly, the system of subsidising biomass production has kept the primary producers over land in a vulnerable situation. This has not only commercialised the ecological relationship between people and land but has also been able to preserve the traditional hierarchy over land whereby the erstwhile landholders continue to extract profit by manipulating even the state subsidies to poor peasants.The productivity-oriented policy of 'new strategy in agriculture' prepared a little before independence made no reference to the agrarian structure and thereby skipped the difficult social question simply to preserve the unity of the freedom struggle.

This approach towards rural planning has been a part of India's agrarian policies much before it was formalised in the Royal Commission for Agriculture in 1928. Vast tracts of forests and agricultural land were used for cash crops such as tea, cotton, tobacco and indigo plantations instead of foodgrains. The massive famines of the British era are directly linked to this misuse of land policies.

In the absence of an appropriate village governance the per capita availability of cultivable land declined from 0.48 hectares (ha) in 1951 to 0.20 ha. in 1981, and is expected to decline further to 0.15 ha. by 2000. The average size of a farm in India is 0.25 ha. against the world average of 0.36 ha. The governance has been incapable of absorbing or controlling the ever-increasing population simply because the land-related pathologies such as soil-erosion, desertification, soil-salinity and other land degradation problems have remained peripheral to administration.

Besides the provision of 'food security' to the masses, village governance has to overcome the widening rural-urban gap. This divide also has its roots in the conceptual dichotomy of agricultural development and agrarian reforms. Globalisation has exacerbated it by commercialising the link between natural resources and human population. It is also responsible for bringing down the share of agriculture from 55 per cent in the First Plan to 33 per cent in the Eight Plan resulting in a considerable reduction of foodgrain production.

There has been a considerable amount of good news flow ing in from villages which have broken through this conceptual dichotomy of state policies. Maharashtra's Ralegaon Siddhi, Rajasthan's Seed and Alwar and Haryana's Sukhomajri, villagers have formed local groups which enable a system of governance functioning upon indigenous practices. They have regenerated soil, recharged ground water, cordoned off common areas for common use and grazing ground for village cattle. They have driven out the development experts sent by government and refused to take relief for drought and famine. A study conducted in Alwar district has shown that almost 80 per cent of their populations have returned after the downsizing of the big village governance by the self-help groups.

The irony is that the long awaited 73rd Panchayati Raj Act of 1993 which contains a list of schemes for economic development and social justice has failed to provide an ecological format for their implementation. Thus the governance remains as external and remote as it was earlier. Poverty can be fought only once the government learns to abstain from celebrating the arrival of developmental grants and commit itself to liberating agrarian reforms from their colonial cocoon. In other words rural governance has to become earthy.