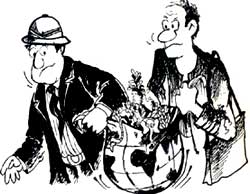 BROADLY speaking, Indian environmentalists can be divided into two categories -- those propagating the claims of four-legged mammals and those who like their mammals to be two-legged. Less cryptically, we may call these two types 'wildlife conservationists' and 'social ecologists', respectively.

For wildlife conservationists, the preservation of the wilderness in its pristine state is the goal of the environmental movement. They value these areas for the protection they offer large mammals like the tiger and elephant, species which biologist Michael Soule has aptly called 'megacharismatic metavertebrates'.

This breed of environmentalists knows how to safeguard its interests. They have easy access to key administrators and politicians, and enjoy a disproportionate influence on government policy. The latest illustration of this is the constitution by the ministry of environment and forests of environmental appraisal committees that are chock-a-block with wildlife conservationists, with nary a social ecologist in sight. Wildlife conservationists, even though they do season their lives with the wild, are city-based and have little touch with rural India.

The conservationists adduce both the importance of biological diversity and the rights of other species in support of his programme. There are enthusiastic supporters of national parks and sanctuaries, which they celebrate as living showcases of what is best in India. Indeed, they would like many more to be created, while protecting existing parks against 'encroachment'.

The social ecologists look at environmental priorities rather differently -- in Anil Agarwal's phrase, they go well beyond 'pretty trees and tigers'. They are primarily concerned with the impact of resource use and abuse on human lives. They aver that this, coupled with energy-intensive patterns of development, have stripped the countryside of its land, forest, water and minerals, all of which are channelised to the urban industrial sector.

This resource centralisation has been accompanied by environmental degradation and social conflict. The latter is exemplified by movements such as Chipko and the Narmada Bachao Andolan. For the social ecologist, the significance of these movements lies in their call for an alternate strategy of development, the fuller working out of which they believe should be an urgent national priority.

Surveying the landscape of Indian environmentalism, there is little doubt that the social ecologist commands a larger popular constituency. He is in close touch with social movements opposing environmentally-destructive policies and with voluntary organisations promoting environmentally-sustainable practices. Indeed, grassroots activists (Chandi Prasad Bhatt and Sunderlal Bahuguna come immediately to mind) have often provided the most acute critiques of development strategy.

Admittedly, these two traditions are not completely irreconcilable. While many wildlife conservationists continue to be insensitive to human suffering, others have become more aware of other environmental problems and their social implications. On their part, social ecologists do concede the need for protecting the wilderness, though they argue that setting up of parks should be in tune with the imperative of overall biological diversity rather than only for large mammals. More crucially, social ecologists believe that park management is very authoritarian as it gives the villagers living in and around them infinitely less rights than the tigers. This has to be replaced by a more democratic system, allowing local communities more benefits from wilderness protection and tourism.

Notwithstanding these partial convergences, environmentalists on both sides of the fence are more often than not in conflict. As far as the management of national parks is concerned, 'two-legged' or 'four-legged' is not simply a rhetorical question, for one has often to assign priorities to the interests of humans and animals.

Sadly, wildlife conservationists usually show little understanding of the social dynamics of environmental degradation. Moreover, their ideas and practice are often derived from the western environmental movement. By contrast, the ideas of the social ecologist are an organic response to, and have evolved from, the Indian experience.

Ramachandra Guha is a fellow at the Nehru Memorial Library and has written two books, The Unquiet Woods.