Bundelkahand's five-year drought is well-known, so people were really surprised when they heard the news about floods in Uttar Pradesh's Banda district in June. True, the rains came early, but does it take only a week's rain to turn drought into floods?

The reasons why drought could turn so soon into flood are mainly four.

One, the water run-off in this region is exceptionally rapid and in recent decades this has been precipitated by relentless deforestation. As a report says "The region's topography is marked by a succession of downsliding gradients from the south to the north. Within these successions rise a number of plateaus whose total area accounts for no less than 24 per cent of the region's geographical area. Such predominance of plateaus is not noticeable anywhere else in this country.Hence, the rain that falls in this region gets drained at superfast speed, after creating flash floods... during the rains and causing long-term water scarcity thereafter."

The report was prepared by the ngos Centre for Rural Development (crdt) and Vigyan Shikshan Kendra (vsk). It goes on to add "The greatest event of far-reaching consequences in Bundelkhand was the destruction of forests. It changed the climate, the rainfall patterns, the perennial character of the rivers, the groundwater recharge pattern, soil productivity, people's life pattern, social mores and ethics...The loss of forest cover gave rise to the flash floods in streams and rivers eroding the surface soils gave rise to ravines."

Two, and partly related to the first factor is that the dams and barrages built on the rivers of this region have shown an excessive tendency to resort to sudden, massive discharges leading to highly destructive flash floods.

Earlier such heavy and sudden release of water had caused highly damaging floods in Banda and Chitrakoot districts. This year too the limited, short duration floods in Banda (in Ken river) were blamed by several local people on this factor.

Three, talabs, the neglect of traditional water sources which could retain and collect a lot of rainwater has proved very costly. As the crdt-vsk report notes "In almost all the districts of Bundelkhand, each village had developed a culture of creating ponds/tanks to help the inhabitants for meeting their domestic water-needs. With the onset of colonial pattern of administration, divesting people of their control over local natural resources, introduction of canal irrigation and decimation of forests, this culture began to decay and is now moribund."


The neglect of tanks and the ponds continued after colonial times and slowly the culture of ponds prevalent in Bundelkhand was overpowered by the commercial culture. In the villages these common resources have been privatized in the name of development of fisheries. Many tanks were flattened to raise paddy crops or for expansion of the village settlements. 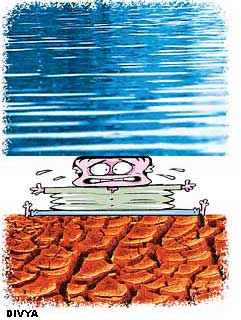 In urban areas, several posh colonies rose in the catchments and even on the beds of tanks. Large-scale shopping complexes were raised while the tanks got filled up with filth and drain/sewer disposals.

Beautification of the tanks, wherever undertaken was cosmetic. The measures were limited to fixing light-posts, repairing the boundaries and/or sometimes removing water hyacinth and other weeds. Encroachments on the tank-beds or the catchment area were never removed, and the natural fresh input of water to these tanks or lakes was never restored.

Last but not the least is the damage done by indiscriminate and destructive mining practices in this region, particularly river-bed mining from sand. This has made the rivers more flood-prone while the paths travelled by trucks and heavy machinery have turned the river towards human habitations.

In addition, of course, there is the issue of overall increase in soil and water erosion caused by various mines in the region.

These factors have combined to create a situation where destructive floods can be caused all too easily even when land is parched after a prolonged drought.

Bharat Dogra is a senior journalist who writes on developmental issues