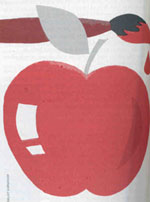 THEY may have been born in dust, but seem destined to rise in esteem. Organic food -- vegetables and fruits -- is now making deep inroads into the marketplaces of the affluent economies; even carving out a niche in their cultural make-up. The interplay of both these factors in relation to environmental concerns is most evident in today's image-conscious market. Britain, a country where organic food is now well-established, can act as an excellent illustration.

In Britain, only 1 per cent of the food in the market is organic. This may actually reflect the unequal financial setup of the 2 food sectors -- organic and mainstream -- rather than the lack of popularity of organic foods per se. The largely subsidised mainstream food industry, blessed with the enormous back-up of the well-established food processing units and the artificial control of prices by governments are naturally cheaper. This contests the notion that organic food is intrinsically an elitist product.

In my own observations at an organic foodstore in Cambridge, England, a significant working-class population spent a relatively large proportion of their money on the cheaper items in the organic food section. Their money was -- unlike the contributions of the rich academics and professionals living on organic food -- a political act articulating their own antiestablishment sentiments.

Organic food, being concerned about the environment as well as about the negative affects of mainstream food on the Third World economies, had wholehearted support from them. The Indian environmentalist Winin Pereira, a critic of most Western food systems, also acknowledges that the organic food movement in the West is on the right path.

Technically speaking, organic food comes of a system of production which aims to be consistent with the natural ecosystems, to optimise the knowledge about the treatment of soils, crops and livestock prior to the processing of food. The principal goal is sustainability, in terms of maintaining the soil structure and fertility, by using renewable natural inputs, rather than fossil fuel-based chemicals.

This more or less standard industrial definition is legally accepted, too. It immediately endears the enterprise to environmental movements concerned about the impact of food production and processing on the ecosystems. A major British licensing body, The Soil Association, closely monitors all farmers growing organic food before passing certificates of approval.

In Britain, the philosophy and practice of organic food is often traced back to the teachings of Rudolf Stenier in the 1920s, and later, to the establishment of The Soil Association by Lady Eve Balfour in 1946. It is only in 1980, though, that one finds a major boost in the organic food sector. Specific food scandals related to the industry, like the salmonella poisoning in eggs, lysteria in soft cheese or the bovine somato tropine (bst) bacteria in milk, caused a considerable din. At the same time, the mass media also circulated new research findings on health and food.
What struck me about organic food in the Western cultural world was the meanings and images it generated. In the shop-shelves they were marked out by purposive earthy symbols, like soil sticking to the fruits and vegetables. This, indeed, would be routine in any Indian market. But in a developed economy, it stands out from the meticulously packaged, standardised mainstream food items.

For a student of social anthropology, food production reflects our assumptions on life's values, health and environment. It moulds our understanding of nature. Varying food habits also mark ethnic differences.

It would be interesting to see how the political concerns of the environmental movement interact with the existing cultural make-up of a people who live largely in a world faraway from the environmentalists' ideal and the meanings generated by organic food. How do the mutated images ushered in by organic food change the assumptions of a culture fed on the slick, technological images of a post-industrial modern society? What were the existing images which organic food had to fight against to gain its present acceptance?

Items in the mainstream food sector have to have assurances of high marketability: heavily packaged and transformed into an item of show, able to compete with other attractive items kept in zany shopping counters. Thus, apples are specially treated to look redder than they are in reality; cucumbers of uniform shape and size are carefully sealed in plastic, or any other vegetable are displayed sans any blemishes.

This very method of marketing paves the way for the artificial preservatives and colouring agents, used to enhance the visual appeal of the items. This is facilitated by the fact that in Europe and America, dirt and organic matter are often synonymous. Images of decay and soil intrinsic to food processing can actually ruin the market. Disguising this decay is the big business within the business of the mainstream food industry.


A crucial point missed in this cultural politicking is that food is essentially a perishable item. Signs of decay are intimately related to the very nutrition value of food, and a tampering on this front may actually reverse the process. It is not as if people are unaware of this fact, but within the dazzling cultural space of contemporary shopping, this consideration is constantly sidelined. Customers have become conditioned to the bright, synthetic colours of the foodstuff. And when they are face to face with dull-looking untreated food, they reject it!

In fact, in the affluent English towns, I have often come across ripe, apple-laden trees in the backyards of houses whose owners preferred to buy apples from the supermarket, assuming that untreated apples were a health risk. So deep-rooted are the myths about dirt in the people's mind, that the images of decay, which actually signify health, become completely transformed into something totally retrograde.

Ironically, all the preservatives, colouring agents and insecticides used to increase the quantity and (supposedly) the quality of food may do greater harm to an individual's health, as well as to the environment, than the washable soil sticking to untreated food.

Social anthropologist Mary Douglas describes the category "dirt" elaborately in excellent terms. In her opinion, dirt is a relative category, differing from people to people, and even from context to context. She defines it as "matter out of place". Dirt is anything which exists in a place where it should not be. What is perceived as dirt varies from culture to culture, only to be classified by mainstream food and value-judged in terms of visual appeal.

Organic food enters the scene by challenging this theory of imagology. It presents a critique of this vision of dirt, and attempts to re-orient the images of organic matter. In its world -- decay, soil and blemishes -- all become sparkling symbols of health.

Of course, these images are accepted only when they are accompanied by arguments outlining their environmental and health benefits. But at the same time, these arguments too, must be aware of the power of the involved images, which have to be tackled to become accepted in the particular cultural milieu.


So, organic food has to transform the negative images which are capitalised on by the mainstream food industry. I came across some literature fervently propagating the consumption of organic food, which showed this awareness. A large amount of the writing was devoted to the symbolic and literal qualities of "soil". It is an important symbol for the organic food movement, being intimately related to the quality of food, besides being the most obvious sign of "dirt".

One of the most important literary works of the movement is called The Living Soil, while a children's book is titled Muck and Magic! In fact, today, the imagology of organic food itself is becoming so popular that even mainstream food is resorting to acquire some of these symbolic images (There is legislative control on this though, by the Soil Association in Britain).

The mainstream food market does, of course, sell a number of items with the label "nature", which is very much a marketable item, with its glorified romantic image fetishised in landscape slices of verdant, refreshing scenic idylls.

However, environmental movements tend to work on more complex images of "organic matter". These images include what some cultures classify as "dirt", and may be closer to the ideals of an "eco-friendly" society compared to the more popularly idealized landscapes.

Organic food makes this distinction between the 2 sets of images in a very focussed manner. By enriching the category of dirt, organic food suggests that an environmentally 'sound' world may look less beautiful and perhaps even "dirtier"! Especially if we have to challenge the existing aesthetic sensibility of the developed world.

While the political and economic arguments of environmentalism are now well chalked out, the imagology of organic food suggests that we have to pay attention to its aesthetics too.

---Rahul Srivastava is a Research Fellow at the Bombay University.