Economy created by NREGA threatens a way of life

The National Rural Employment Guarantee Act was passed last year primarily to strengthen the livelihood resource base of the rural poor, and enhance their social security. But within the country -- particularly in the districts targeted by this act -- there exists a vast difference in how communities perceive livelihood and social security. Historically, most tribal communities including those from the north-east have sustained themselves on natural resources; they either owned and managed them or had usufruct rights. But today, tribal people in only a few states in the north-east own and manage natural resources. In tribal belts in the rest of the country, their sustainability and livelihood depends on government policies (read whims and fancies of the state).

This actually means that on one hand tribal communities are deprived of their rights over the natural resources they have so far protected and derived their livelihoods from.On the other hand, governments and mainstream political parties in the country are pushing development programmes which foster an economy that is completely alien to tribal mores. The Employment Guarantee Act, for example, promotes a wage labour economy that tribals are yet to come to terms with.
Promoting individual wage labour among people whose ways of lifesocial, cultural, political, economicis community-centric could be dangerous and lead to severe internal conflicts. Many tribal communities in the districts of Upper Subansiri, Changlang, Lohit, North Sikkim, Bastar, West Garo Hills, Kalahandi, Koraput, Malkangiri, Bolangir and Sirmaur are not fully integrated with the market and the wage labour economy. If they are poor today, it is because their natural resource-led sustainable economy is under attack and crumbling gradually.

Secondly, most of these tribal groups have historically mobilised themselves as communities whenever they needed to create social assetsin fact, socially relevant assets. The assets thus created always belonged to the community as a whole. No individual owned them. Historically, the assets were always the products of community efforts and communal labour. Conservation and/or development schemes such as water conservation, water harvesting, afforestation, irrigation works, renovation of traditional water bodies and rural connectivity will never be successfully implemented with individual wage labour. Wage labourers will never own the process and the end product, they will only be lured by the money that their labour will bring.
Wage labourers, in a purely capitalistic economy, are completely detached from the productwage labour, in fact, is designed to achieve such alienation. They are never meant to own the product of their labour.

This is an important reason for the Employment Guarantee Act's failure to deliver on its promises. The community plays no role in decision-making and implementation processes. The entire process has been usurped by both the government and political bureaucracy; schemes have been changed and there are allegations of large-scale corruption and misappropriation of resources. 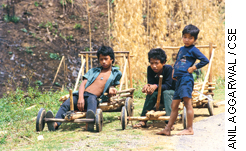 Tribal communities in the backward districts of our country will gain immensely and not slip into poverty if their rights to resources are acknowledged and ensured. Efforts like the Employment Guarantee Scheme could be successful if the decision-making process and its implementation is best left to the community. In turn, the state should find ways to support community efforts and that may include providing them with monetary support.

Promoting wage labour that undermines community efforts in tribal communities will neither eradicate poverty nor facilitate success of the Employment Guarantee Scheme.

Souparna Lahiri is a member of the Steering Committee of National Forum of Forest People and Forest Workers. He is also associated with the Peoples Forum against the Asian Development Bank