Of Joshimath and Martin Ravallion: The sinking town shows all that is flawed in our poverty reduction discourse

Sustainable development is no longer a buzzword; it now questions the neoliberal economic development model, whose impacts are staring us in the face 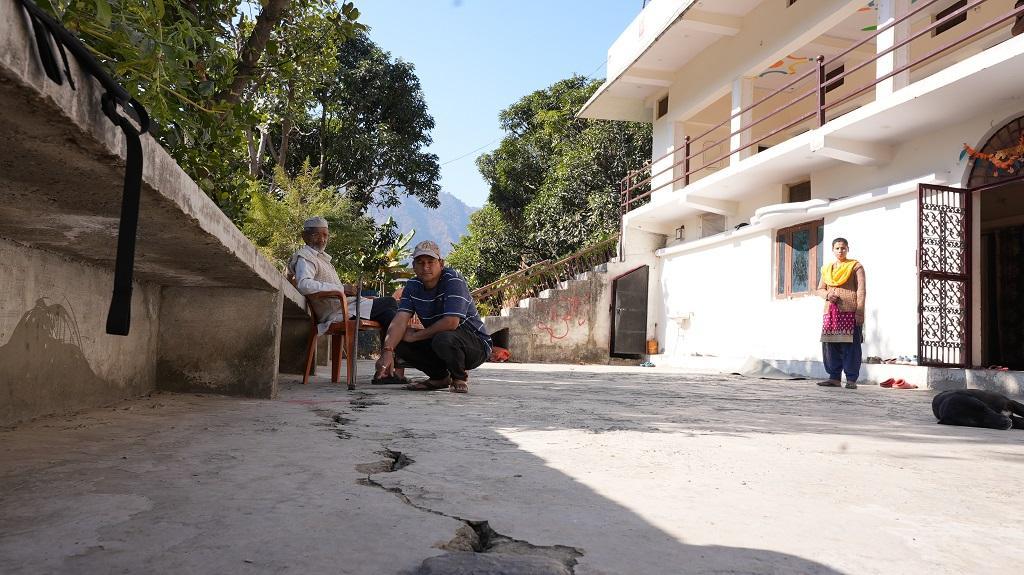 Limits to unplanned development and growth of our cities and rural areas, were bound to come up sooner than later. Photo: Sunny Gautam / CSE

This article has been updated

What has the current tragedy of the sinking of the hill town of Joshimath (and some other hilly towns and villages) in India got to do with the poverty reduction discourse of economists?

Poverty reduction has been a long standing aim of governments and bilateral institutions like the World Bank. The understanding of poverty and its theorisation, is now considered outdated, amidst the prevailing mainstream drive of growth (GDP) at all cost push that has not only captured the imagination of all but also of the people most impacted by it.

The lack of social security, affordable health care, education and other welfare measures, the insecurity of daily survival, have all pushed people into accepting a mindless GDP growth as a mantra for economic development.

The rich statistical data systems in India till 2020 (Census and NSSO data), provided economists with a rich raw data of social and economic data to play around with and to develop theories and policy prescriptions on poverty reduction.

A normative poverty reduction theorisation, based on a statistical analysis of incomes / expenditures, has been a major reason not only for the decline of the relevance of understanding what constitutes poverty and understanding its prevalence, but also of the disinterest in public mind on what needs to be done.

Definition of poverty reduction and measurement has evolved in a purely economic reductionist approach from understanding poverty as access to basic nutrition level food consumption, to a standard $1.25 per capita per day income norm.

Thereby in a way justifying GDP growth as a proxy for poverty reduction, with a caveat to address growing inequity. Combining measures like cash transfers and basic income to address minimalist survival outcomes.

Martin Ravallion who passed away recently, was the originator of the $1.25 poverty line. A renowned erstwhile World Bank economist and academic, he was a prolific author of several authoritative papers and policy recommendations on poverty measurement, its scale and depth.

To the credit of Martin Ravallion and Gaurav Datt, who together did several studies on poverty reduction in India — they did raise the issue of inequity in GDP growth led poverty reduction. Specially during the period of neo liberal economic growth in countries like Brazil, in China post 1980, and in post 1991 India.  Also highlighting the emergence of urban poverty.

What is happening in Joshimath today, the tragedy of sinking of the town and with it the homelessness of local inhabitants of the town, has come after massive capital investments in power sector, in production and procurement of cement and steel, and jobs for local people as contractors and workers on several roads and related power plant construction works. However it has come at a huge cost of destabilising the very foundations of the fragile Himalayan ecology. A similar fate awaits other hill towns.

Malthusian predictions of imminent poverty and hunger when India got independence in 1947, seemed real. Of food production falling short of population growth. It was therefore natural for to link poverty reduction to elimination of hunger. Consumption of food (cereals primarily in India), of a certain calorific minimum( 2100 calories a day per person), alongwith a few other expenditures, was important evolved as a measure of poverty estimation.

Family consumption expenditure (a proxy for income) that enables a minimum level of nutrition intake — became the norm of “poverty line” assessment in India. India had a world class leading consumption expenditure National Sample Surveys data that we produced, that became the playfield of economists like Ravallion and Datt to assess how India was faring in poverty reduction over time.

The period of 1970-1991, saw a jump in cereal production and availability, on the back of the Green Revolution. Procurement prices of foodgrain raised slower than other consumption goods. Making food relatively cheaper than other goods. Starting with Rs 2 kg rice in Andhra Pradesh in the 1980s, to free foodgrain today — we have come a long way in terms of cereal and foodgrain becoming affordable for the poor.

By the 1990s, the World Bank under the guidance of Ravallion, came out with a standard norm of $1 per capita a day norm of poverty line assessment (later increased to $1.25), delinked from food and hunger.

Increasing income inequality is rightly identified by Ravallion and Datt, as outcome of economic growth and poverty reduction from increasing urbanisation and GDP since the 1990s, based on the last 3 decades of data analysis. When purely seen from a normative economic perspective, it leads to the analysis and conclusion drawn by the authors — that poverty reduction has hastened due to higher GDP levels post 1990s and sectoral analysis of impact of economic growth on poverty reduction is no longer related. Rural poverty has benefitted from urbanisation, from labour and employment in construction and other work, that has increased manifold since the 1990s. However now urban poverty is more of an issue than rural poverty.

This conclusion however does little in terms of understanding what a “poverty line” measurement needs to measure and monitor. Does a simplistic $1.25 measure help in drawing any meaningful analysis of poverty level when variables for assessing poverty have increased beyond nutrition? “By the frugal $1 a day standard there were 1.1 billion poor people in 2001 — almost 400 million fewer than 20 years earlier.” A lot of that drop in poverty was from China in the early 1980s. “At the same time the number of people in the world living on less than $2 a day rose, so that there has been a marked bunching up of people living between $1 and $2 a day. Sub-Saharan Africa has become the region with the highest incidence of extreme poverty and the greatest depth of poverty.” (Chen and Ravallion, 2004)

A $1.25 or $ 2 per person a day poverty line does not afford access to nutrition and food, health care, education, housing, transport and communication. And a life lived for higher purpose than just earning this low daily income. If these are provided to all free or at heavily subsidised rates, then do we need a poverty line at all? Health care and education are publicly provided, good quality housing, clothing is accessible by all and not by income levels — is this provision dependent on rapacious exploitation of nature, of labour and consumption that promote a culture of produce and destroy? So that we can keep producing more and more irrespective of how, for what and for whom? Benefits of public health care and education and a reduction of income inequality far outweigh the benefits of economic growth with inequity. The peer pressure from unequal access and differential living standards, the social impact of an unequal society, re enforces status quo and more inequity.

Coming back to the disaster of Joshimath town sinking. The $1.25 per capital income basis poverty assessment would certainly show a big decline in poverty levels of the small town. But what is the value of this income level(small by any standards to the well being), when it comes at a cost of the loss of their homes and habitat?

A small monetary income level income increase, with its source originating from unsustainable growth in agriculture or infrastructure development and construction(that may impact other poorer regions where mining for steel, minerals and cement are done), may mean little.

Development at what cost and for whom? Those who seemingly benefitted from a substantive decrease in poverty levels due to rapid GDP growth, from urbanisation, as per the analysis of Datt and Ravillon — whether in Punjab or Uttarakhand or Bihar — what are they paying for this decline in poverty and how sustainable is this decline in poverty levels? Economists don’t undertake sociological analysis or assess environmental impacts of economic policies. Simply saying growth heightens inequity and debunks Kuznets curve, helps little. Sustainable development is not a buzz word any more. It now questions the neo liberal economic development model that came about from the 1970s in Europe and in the rest of the world thereafter. Removing all barriers to free movement of capital and investment(environmental, legal, urban planning), was seen as a requirement of economic growth. Limits to unplanned development and growth of our cities and rural areas, were bound to come up sooner than later. Climate change is exacerbating the existing crisis of neo liberal economies. Threatening the very existence of humankind. Band aid solutions, more funding for disaster mitigation or for loss and damage funding — is no more a solution today. People displaced from the sinking of Joshimath town, have no where to settle down in the hills.