The newly launched renewable energy certificate (REC) market has been witnessing a flurry of activity. Governments, regulators and project developers are upbeat, and the first trading day in March 2011 hit the ceiling price. Though the subsequent session was subdued, stakeholders are optimistic that the new market can quicken the harnessing of renewable energy potential of the country, which has been sluggish so far. But REC is not a magic wand to achieve clean energy goals and it could have problems.

The scheme was launched by the Ministry of Power and the Ministry of New and Renewable Energy to give impetus to the tardy pace of renewable energy development in many states. Through the Electricity Act of 2003, the concept of renewable energy purchase obligation (RPO) was introduced to encourage non-conventional energy sources. Some states did have non-conventional energy targets before, but RPO implied they had to commit purchasing a quota of energy from non-conventional sources like wind, biomass and small hydro plants by 2010. By 2006, many states announced their RPOs and the governments strengthened the premium prices for purchase of renewable power, called “feed-in tariffs”. The governments hoped the market players will pick up the bait and states would move rapidly towards meeting the RPOs. Only a handful of states showed any progress.

In 2008, regulators had to remodel the renewable energy policy, largely because prices of conventional energy sources like coal and gas were rising and there were international demands on India to step up its low carbon efforts. So the National Action Plan for Climate Change stipulated a renewable energy target of five per cent of total power generated in 2010, going up by one per cent a year to reach 15 per cent by 2020.

The targets were ambitious and they made regulators launch a fancy sounding scheme borrowed directly from the US and European markets: the REC market. Under the scheme, each electricity distribution company, or discom, not meeting its RPO target would have to purchase an amount equivalent to the shortfall of quota in the form of REC credits. Each REC credit is equivalent to one mega-Watt-hour (MWh) fed to the grid and regulators fixed the price band for non-solar renewable energy projects between Rs 1.5/kWh and Rs 3.9/kWh. This REC price is over and above the average pooled electricity price, hovering around Rs 2.2/kWh, that is obtained by discoms from conventional sources like coal and large hydro plants. The Central Electricity Regulatory Commission (CERC) spelt out clearly that the monetary value of REC thus equals to the “environmental attribute” of renewable energy fed to the grid—a concept they did not elaborate. They also stipulated each REC has to be retired within a year of issuance.

A renewable energy project developer has the option to either go for the vanilla feed-in-tariff incentive scheme or opt for an average pooled price that can be topped by selling RECs. The first trading session—where the exchange happened at the ceiling price of Rs 3.9/kWh—sent out a clear message that should alarm policy designers. REC market could become a self-fulfilling scheme for electricity regulators that could set the discoms, end-users and state governments on the path of fiscal ruin.

Who could be the loser then? The discom and the home state where the REC project is located. If the project opts for REC, it can sell the “environmental attribute” of its clean energy to any discom in the country. The home state thus cannot necessarily include the project for its in-house RPO compliance.

So if the REC market flourishes unabatedly, states will not be able to meet their incremental RPO targets and will have to push their discoms to buy the expensive REC credits, creating further market demand and making high REC prices inevitable. The increasing price of coal-based power generation could also shift the scale towards REC. States will have no option but to raise feed-in-tariffs to meet the RPO quota. They may also have to announce additional sops to attract in-house projects.

The REC scheme could thus end up with returns higher than the 15-20 per cent range the electricity regulators envisage for a project. If every future project developer opts for REC, imagine the financial upheaval it can create, and the resulting uncertainty.

The big question is: have the policy designers thought of such a worst-case scenario? It may also lead to states discouraging new projects under REC.

The second contention is: do REC projects also qualify for global carbon market trading regimes under the Kyoto Protocol and voluntary carbon markets? Can the same “environmental attribute” be sold twice, nationally and then globally? The voluntary carbon standard has clearly laid out disqualification guidelines but the UN’s Clean Development Mechanism (CDM) has not spelt out any criterion yet. A biomass project in Chhattisgarh, which is registered under both CDM and REC, is expecting a windfall from this policy loophole.

Indian electricity regulators and climate negotiators have so far turned away from confronting this difficult question. In fact, if REC projects continue to qualify for CDM, there is more incentive for project developers to shift to REC than opt for feed-in-tariff route. This will only aggravate problems for discoms as discussed earlier.

Lastly, the major buyers of RECs will be discoms who do not have any say in ensuring a state’s RPO targets are met in the required timeframe. That is the responsibility of the state, which has to announce promotional schemes to attract project developers and streamline the process for setting up projects. Only a handful of states have done that so far. So in case a state is tardy to meet its new RPO, discoms will have to bear the financial brunt of purchasing RECs.

This can lead to two possible outcomes—one, discom passes on the cost of RECs to its end-users like households, shops and industries. Second, the state bails out the discom, inviting taxpayers’ fury. Most discoms being state-owned and already reeling under operational losses, further financial bail-outs by state governments would not be taken lightly by citizens. The Maharashtra State Electricity Distribution Company Ltd, a discom, has already voiced concerns of the state electricity regulator’s new RPO targets as “impractical”.

Besides, the cost of REC credits

could become unaffordable for some poorer discoms. To counter such circumstances, framers of REC regulations have inserted a “carry forward” clause where the shortfall can be stretched till the RPO of 2020. In case state electricity regulators apply this lifeline, there could be a domino effect, reducing the demand for RECs and thereby causing market uncertainty. Of course, the additional funds required by discoms could be financed from the National Clean Energy Fund launched in the 2009-10 Union budget. But the source of this fund is actually by a levy on coal, the same fuel which largely determines the average pooled cost of power. Any increase in coal levy would shift the balance towards the REC.

Another source of finance could be post-2012 international carbon funds. But then care needs to be taken on the double counting of “environmental attributes”. Even if it is resolved, can India show the REC projects under its autonomous climate mitigation action?

There needs to be a comprehensive analysis of the renewable energy trading mechanism to ensure fair and even distribution of fiscal returns for unlimited projects rather than windfalls for smaller number of projects.

The question of who is ultimately liable financially for purchasing RECs also needs answers.

The author is with the Centre for Science and Environment, Delhi 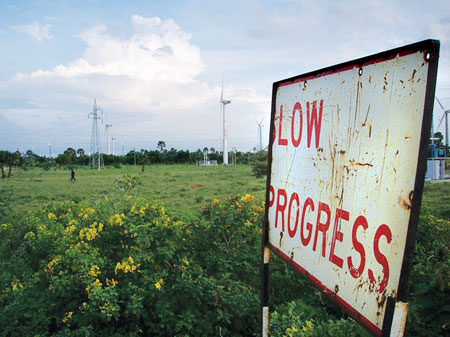