Current climate pledges will raise temperatures by 2.1 degrees above pre-industrial levels and more action is needed in the energy sector, says the World Energy Outlook 2021 report

The IEA has traditionally been a fairly conservative agency, that has been accused of being friendly towards oil and gas interests

The Paris-based International Energy Agency (IEA) published its World Energy Outlook 2021 (WEO) report October 13, 2021. The goal of the report is to assess progress made by countries on their clean energy transitions ahead of the 26th Conference of Parties meeting in Glasgow next month.

It finds that current climate pledges made by countries in the form of nationally determined contributions and net zero targets (detailed in the Announced Pledges Scenario or APS), could reduce global energy-related carbon dioxide emissions 40 per cent by 2050.

Yet, global temperatures will still rise by 2.1 degrees Celsius above pre-industrial levels in 2100.

Global surface temperature has risen by 1.09 degrees Celsius since pre-industrial times, edging close to the 1.5-degree limit outlined in the Paris Agreement. That is according to the Sixth Assessment Report published by the Intergovernmental Panel on Climate Change in August.

The energy sector is still responsible for over 70 per cent of global greenhouse gas emissions.

The IEA separates pledges from the actual policies put in place by governments currently. The latter is detailed in the Stated Policies Scenario (known as STEPS), which will cause global average temperatures to hit 2.6 degrees Celsius above pre-industrial levels in 2100.

The pledges in APS and stated policies in STEPS differ by 2.6 billion tonnes of carbon dioxide in 2030.

Both the APS and STEPS fall far short of the pathway required to take global emissions to net zero by 2050 (the NZE scenario, which is compliant with the Paris Agreement). The APS differs from NZE by 12 billion tonnes of carbon dioxide. 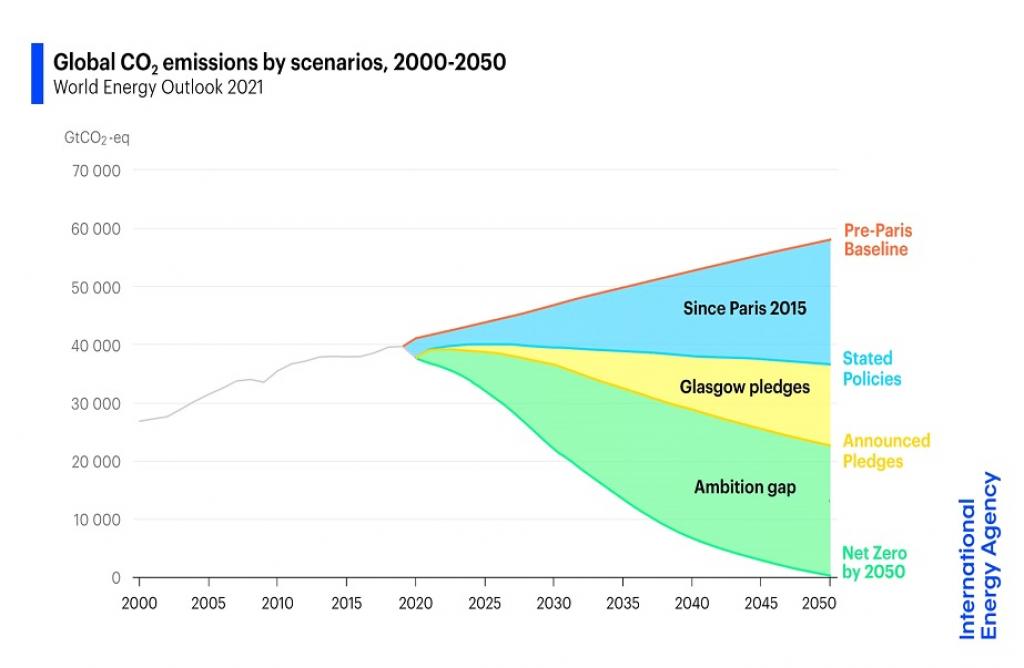 In the NZE, it falls to 24 mb / day in 2050. Natural gas demand rises and drops sharply after 2025 in the NZE. But by 2050, the IEA assumes that “more than 50 per cent of natural gas consumed is used to produce low-carbon hydrogen and 70 per cent of gas use is in facilities equipped with carbon capture, utilisation and storage.”

The IEA has traditionally been a fairly conservative agency, that has been accused of being friendly towards oil and gas interests as recently as last year. They then published a report in May 2021 titled Net Zero by 2050.

This report rattled this perception, by calling for no new investments in coal, oil and gas beyond projects already committed. This has been reiterated in the WEO 2021.

Yet, momentum remains glacial in this regard. The IEA says that to achieve the Paris Agreement’s 1.5 degree goal, investments in clean energy must reach $4 trillion by 2030, 70 per cent of which will focus on developing countries.

But major banks are reluctant to follow the IEA’s prescription to stop financing fossil fuel companies, according to the Financial Times.

The IEA has hailed India as a success story for financing renewable energy towards the achievement of its 450 GW target. But coal remains deeply entrenched in the economy, with the auctioning of mines to private investors continuing unabated.

The regions that must shoulder the bulk of energy decarbonisation however are the developed countries. Despite lofty pledges, major polluting economies are proceeding with their oil and gas exploration plans, with the United States opening up the Gulf of Mexico for drilling and the UK approving new projects in the North Sea.

The IEA emphasises rapid electrification of global infrastructure, greater energy efficiency and cutting of methane emissions from fossil fuel production to close the gap between pledges and net zero.

It also urges a boost in the development of technologies like hydrogen and carbon capture.