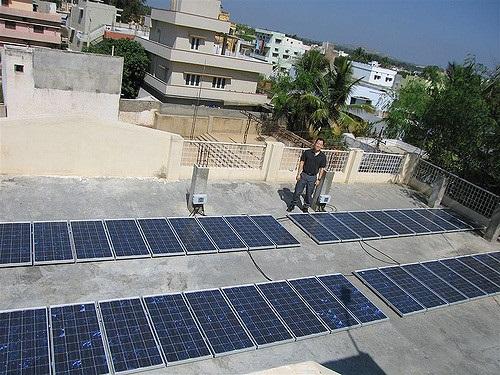 This was part of the Centre’s target of 100,000 MW solar power generation by 2022. In the Karnataka solar policy, rooftop solar power has been incentivised through net metering which means that consumers have to pay the bill net of their export as well as for self consumption.

The policy says that if there is surplus, discoms will pay consumers as per the tariff determined by the Karnataka Electricity Regulatory Commission (KERC). Karnataka is one of the few states that do not limit the size of the solar plants for installation.

The KERC issued an order for the tariff payable for solar rooftop and small photovoltaic power generation plants valid from May 2, 2016 to March 31, 2018.

In this, the KERC introduced gross metering for homes, hospitals and educational institutes. Gross metering is a concept where the distribution company pays the consumers per unit of tariff for every unit exported to the grid usually higher from the tariff charged for consumption.

This is a unique change for three reasons:

Even though discoms are trying to increase the share of renewables in the state, there are flaws in their calculations for the tariff of plants.

In the first place, tariffs make an assumption that for a plant of less than 10 KW capacity, the cost of 1 KW system would be only Rs 75,000.

According to an analysis conducted by Delhi-based non-profit Centre for Science and Environment, the cost of a grid connected system would be around Rs 1 lakh. So, the premise of the calculation itself falls short by around 25 per cent.

This can hardly be true since MW-scale projects build in the multiples of 50 and 100, and therefore are able to achieve such economies of scale.

Also, all prices that have been quoted are for grid-connected projects, assuming that there is going to be electricity 24X7.

If there is not a battery back-up with the system, a blackout is a blackout. This is one thing most people fail to realise.

Most states have a restricted policy for rooftop solar saying that one can put up a rooftop solar of a partial capacity of the actual demand. There have been restrictions on the grid penetration of solar rooftops. Karnataka allows the maximum penetration of rooftop solar in the country (80 per cent of the transformer capacity).

All these restrictions have been put in to ensure that there are not expenditures that are created for the discoms and getting them deeper into financial trouble. It seems that Karnataka has decided that there is not going to be any restriction on the path to renewable energy development.