Indian faiths cause a lot of environmental pollution 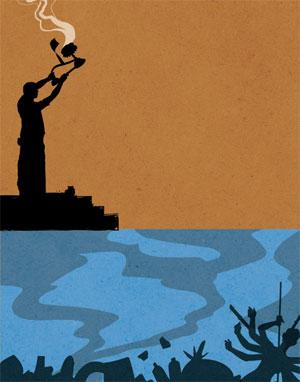 It is that time of the year again. A time when the people of India observe a string of festivals, culminating in Diwali and Christmas at the year-end. The media has a name for it: the festive season. Though I am not against Indians celebrating any religious festival, I do take offence to the manner in which they do that, causing irreparable damage to the environment.

Festivals initially were meant to celebrate life itself, to thank the Creator for the gifts bestowed during the year. However, all that changed when religions began to become organised and institutionalised more than 2,000 years ago. And in the modern era, where consumerism has joined forces with organised religion, the result is there for everybody to see: pandals hosting idols that are immersed in water bodies which then become contaminated. The residents of every mohalla in the city want to prove that their pandal has the most grand idol and can attract the most celebrities. Unfortunately, such grandstanding comes at a terrible cost.

I would say that the so-called Indian faiths cause a lot of environmental pollution (with Hinduism leading the pack), although I am not absolving the Abrahamic religions completely. However, I would not include the religious beliefs of India’s tribals and forest-dwelling communities in this category. That is because their beliefs are not organised. They love the trees and groves. They don’t have temples, mosques and churches. Their festival observances are very simple, something that we, the so-called civilised masses, should learn from. And this is something common to indigenous peoples across the world. How can one forget that immortal letter of Seattle, Chief of the Suquamish Nation, after whom the city of Seattle in the US state of Washington is named? In that letter, written purportedly around 1855 to the then US President Franklin Pierce, Chief Seattle argues against selling his tribe’s land to the US government. He says, “You may be ready to buy, but we cannot sell. We cannot sell the earth, the fragrance of the flowers, the humming of the bees.” That is the hallmark of a truly great culture.

Of course, there do exist religious leaders today who care for the environment. Take Pope Francis I for instance. In his encyclical, “Laudato Si” published on May 24, 2015, the Pope talks extensively on ecology and especially, climate change. When I went through the document, I was ecstatic. Here was a Pope who was standing for a completely new paradigm of development. A document like Laudato Si is the need of the hour. I would rather that leaders of every religion, including those in our part of the world, read it and imbibe some of the values, which are universal in nature and do not deal with Christianity or Catholicism exclusively.

My own personal philosophy towards religion and the environment can best be explained by the following anecdote. Some years ago, when the Jyllands-Posten controversy regarding cartoons of the Prophet Muhammad broke out, I was invited by the government of Iran to a conference of religious leaders at the city of Isfahan. When it was my turn, I condemned the cartoons. But then, I asked a very bold question to the people assembled: “You are outraged because someone drew a caricature of the Prophet. But why are you not outraged when someone caricatures Allah?” Those assembled asked me a counter-question: “How could anyone caricature Allah?” I replied when we pollute the clean air and water created by Allah, we caricature Him. To this, I added another stunner. The first Kalimah (Islamic creed) says La Illaha Illallah, Muhammad ur Rasulullah (God is one and Muhammad is His Messanger). I said I have a personal Kalimah of my own. It goes as La Illaha Illallah, Zarra Zarra Rasulullah (God is one and every particle of the Universe is the Messenger). In short, we should hold everything in this Universe as sacred, not as something to be toyed with but as something from the Divine. The leader of the Ayatollahs gathered there hugged me on the spot.

Agnivesh is a well-known social activist. He can be reached at agnivesh70@gmail.com