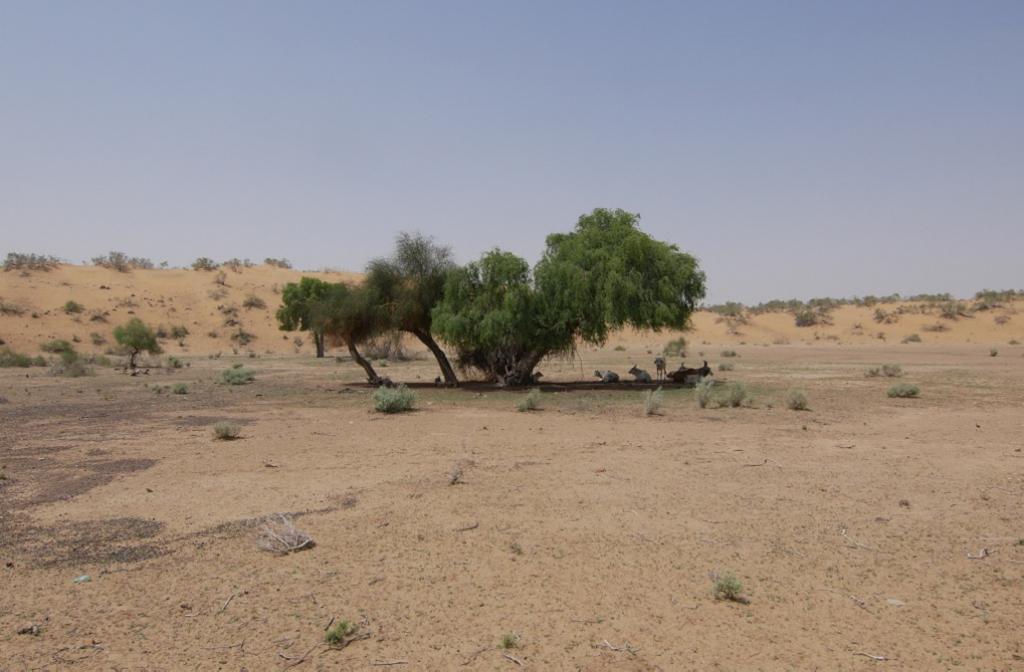 Sardara Singh Johl, a Padma Bhushan-awardee agricultural economist and chancellor of Central University of Punjab, has suggested that if agricultural land in Punjab is to be protected from desertification, the best way is to shift wheat and paddy cultivation to 5 million hectares of land in the Indo Gangetic plains of Uttar Pradesh, Bihar and West Bengal

Johl’s mantra, unfortunately, doesn’t provide concrete measures to pause desertification. The senior agricultural economist should have counteracted Green Revolution which gave birth to the problem. Transferring a disease from one geographical area to the other is not a remedy because we do not know how to get rid of the causal agent of the disease.

The area most affected by desertification is the dry land, which alone tightens its screws on about 40 per cent of Earth’s land area. Dry land is home to more than 2 billion people worldwide.

Out of the world's arid land, an area of about 12 million square kilometres is affected by desertification.  About 10-20 per cent of dry lands are already degraded. The rapidly expanding desertification threatens more than a billion people living in dry land around the world.

Desertification is, in a sense, crawling of death on the land. The desert means a dead land. The death may not be permanent. For example, cultivated land dies almost every year or after every crop season when the nutrient reserves in the soil are used up.

With application of sufficient amounts of nutrients through chemical and mined fertilisers, the soil gets a new lease of life with the onset of a new harvest season.

Agricultural land is in the cruel clutches of desertification almost everywhere. In the long run, despite the huge amount of external inputs applied in agriculture, death on cultivated land will go on creeping, irreversibly and permanently.

After cleaning the forest, the process of desertification begins naturally but the growth of the process depends on the management of farming practices, such as tillage intensity, amounts of chemical fertilizers and pesticides applied, frequency of irrigation, soil fertility management, among other things. The greater the intensity of tillage and amount of agri-inputs, the higher the rate of desertification.

Introduction of the dwarf wheat varieties developed by Norman Borlaug in Mexico in the 1960s in India's agriculture sparked the process of desertification of the earth. The dwarf wheat crops of the Green Revolution licked the fertility of the soil in a few years.

Then, in the 1970s, the International Rice Research Institute in the Philippines dispatched short-duration dwarf rice varieties. The new rice varieties fueled the processes of desertification.

With very high fertilizer, chemical and water consumption capacity, the dwarf crop varieties of the Green Revolution have two contrasting attributes to offer to humanity: food security and desert.

All deserts in the Earth's geological history had emerged thanks to natural factors. But in our contemporary world, the process of desertification is virtually anthropogenic. Desertification associated with agriculture, in fact, is a deep concern that we need to focus on and chalk out workable strategies to prevent the process and reclaim desert lands into fertile fields.

Desertification begins with human activities involving removal of vegetation from the surface of the land, or deforestation and uncontrolled grazing by animals. The Green Revolution agricultural system has given a boost to the process.

There are many more developmental dimensions behind the soil erosion and land degradation. Deforestation, of course, has become a necessary evil for socio-economic progress in our times.

In the adoption of policies and schemes such as agriculture, road construction, urbanisation, industrialisation, which are important development signs of modern socio-economic development, the desolation of forests seems to have become an imperative.

The essence is that our contemporary world cannot live without devouring the earth's forests. That is, the desertification of the Earth is at the core of today's civilization

Agriculture, without which our existence would be at stake, is the root cause of desertification. Modern agriculture has no connection with forests. Chemical fertilisers, various types of chemicals and pesticides that destroy soil microbes and other organisms, alter the structure of the soil and destroy its flora and fauna.

Intensive tillage with heavy machinery and equipments, tendency of growing monocultures, overexploitation of soil and soil pollution are the processes turning fertile land into unproductive desert. Excessive and frequent irrigation, an essential need of the Green Revolution crops, salinises the soil, causing death of the soil in the long run.

Desertification takes only the upper fertile layer of the land into its clutches. The lower layers of the land are replete with nutrients.

Sometimes the nutrients in the upper layer may be abundant, but due to some factors, such as the high proportion of salts in the soil, soil water and dissolved nutrients do not become available to plants and vegetation does not grow on such soils.

The Asia-Pacific region is at the forefront of these figures, with 6.3 per cent and 8 per cent of land salinisation and sodium excess, respectively. More than 9 million hectares of land in India is suffering from salinisation.

Soil fertility is a ‘byproduct’ of the microbial decomposition processes, and microorganisms in the soil thrive on nutrients in organic matter.  The food chain of all organisms inside the soil is based on organic matter produced by photosynthesis.

Organic matter flows through the roots, leaves and other parts of the plant into the soil and from there into life via foods. In the soil, such bacteria also thrive, which fix atmospheric nitrogen into soil, making it available to the plants. But chemical fertilisers and agrochemicals destroy these bacteria further accelerating desertification.

To regain the fertility of the soil, we have to enhance the capabilities of photosynthesis. Although grain crops, like all green plants, do photosynthesis, but since they cannot absorb nutrients in the deeper soil layers, the desertification process cannot be stopped.

Unlike these, trees absorb nutrients from the depths of the earth and bring them to the upper surface of the soil, thus protecting the land from becoming a desert. Adoption of agro-forestry, raising legumes, recycling of nutrients, nurturing soil with organic fertilizers, expanding the biodiversity base of agriculture, proper management of soil water, and afforestation and reforestation on larger and larger areas of the land would prove vital for preventing desertification of the earth.