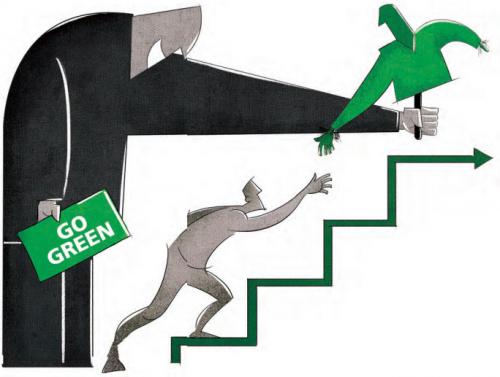 “Green nudges”, in particular, have been suggested as a promising new tool to encourage consumers to act in an environmentally benign way, such as choosing renewable energy sources or saving energy, food choices or farming practices (affecting soil, water and biodiversity).

For instance, to reduce energy consumption, the United States government sent letters to those who consumed a lot of electricity suggesting that their neighbours used less. This reduced their consumption.

Providing hotel guests in the US with the information that 75 per cent of hotel guests reused their towels also increased the reuse of towels. A tax system designed by the United Kingdom government sent letters to people who were behind on their payments stating that “If you don’t pay you will lose your car”. This tripled the payments.

Africa’s second-largest slum is located in Kibera, Kenya, a place with the rampant and lethal water-borne disease. Researchers were surprised to see the low uptake of water purification even after residents were given discount coupons for the chlorine solution. An extra trip to the store for chlorine solution was inconvenient for the households after making daily trips to a water source.

Once placing large containers of community chlorine solution near the water source, which only dispensed the right amount, increased the uptake rates from 10 to 60 per cent.

There are other examples on the prevention of excessive use of antibiotics, better collection of tax revenue and compliance with health food and environmentally friendly action where people have been catalysed by using “nudging”.

Behavioural science says that even small hassles can make it difficult to adopt a programme or product. Changing behaviour of people can yield favourable results including those for the environment and nature conservation.

A nudge is an aspect of how behavioural science can be applied in the public policy constituency. The inclusion of behavioural insights for guiding policy practitioners is becoming increasingly popular, through utilising the findings and methods provided by cognitive psychology and behavioural economics to formulate public policy.

The most popularised application of late is “nudging” which emerged as an outgrowth of behavioural economics, and for which Richard Thaler won the 2017 Nobel Prize.

Nudging entails a system of gentle encouragements, based on advanced knowledge of the decision-making process. Nudges are relatively modest interventions that preserve freedom of choice but that steer people towards particular directions.

Types of nudges include the provision of information, changes in the physical environment, warnings or reminders, use of a green default option, and use of social norms and regular feedback.

Around the world, a number of governments have established so-called nudge units, reflecting that the economic principle is increasingly being adopted in designing public policies, estimates the World Bank.

The UK established the first Behavioural Insights Team in 2010 and other countries followed suit including the US, Australia, Canada, the Netherlands, and Germany as well as Asian countries such as India, Indonesia and Singapore.

There are some very successful examples of nudging behaviour for effective conservation policy. Power, a software company whose aim is to encourage people to use less energy, saved $250 million of energy consumption without incurring any considerable investment, utilising the powerful behavioural moderator of social norms.

A study from Cape Town found that behavioural messages are found to have a significant effect on water saving, resulting in an average reduction of water usage between 0.6 and 1.3 per cent across the various treatments.

The results further confirm that raising awareness about how much water an individual consumes, and comparing this consumption level with peers, can go a long way in helping change individuals’ behaviour regarding the use of a finite resource such as water.

Nudges can go wrong as well if they see as inconsistent with the interests or values of the people whom they affect. There are challenges for policymakers seeking to use nudges in reliable ways, even with significant potential and replica ability across populations.

Finally, we must understand people’s response to policy design and its impact. Still today we have around a billion people in poverty, and Sustainable Development Goals 1 and 2 identified them as their priority. Poverty eradication, for example, can’t succeed unless we understand what policy proves to be more effective in tackling material deprivation if all types — absolute, relative or transient).

It is very appropriate that in 2019, the Nobel Committee has awarded three economists — Abhijit Banerjee, Esther Duflo and Michael Cremer — for their work on field experiments in research, to bring the principles of laboratory-style randomised, controlled trials to empirical economics.

The same experiment-based approach can also be used in the wider context of health care provision, education, agriculture, and gender attitudes, besides natural resource management — forest, fish, coasts and carbon.

2020 draws special attention on the conservation of nature and biodiversity. The United Nations General Assembly will call a special session on biodiversity, which would discuss nature-based solutions, and the Conference of Parties of the Convention on Biological Diversity would discuss the strategy for the Global Biodiversity Framework. Nudging as a new tool has great potential to realise the ambitions of conservation and development.

The author is the chief environmental economist with the United Nations Environment Programme. The views expressed here are not necessarily a reflection of the organisation’s view