Scarcity, conservation, equitable and fair use of limited resources does not apply to them. 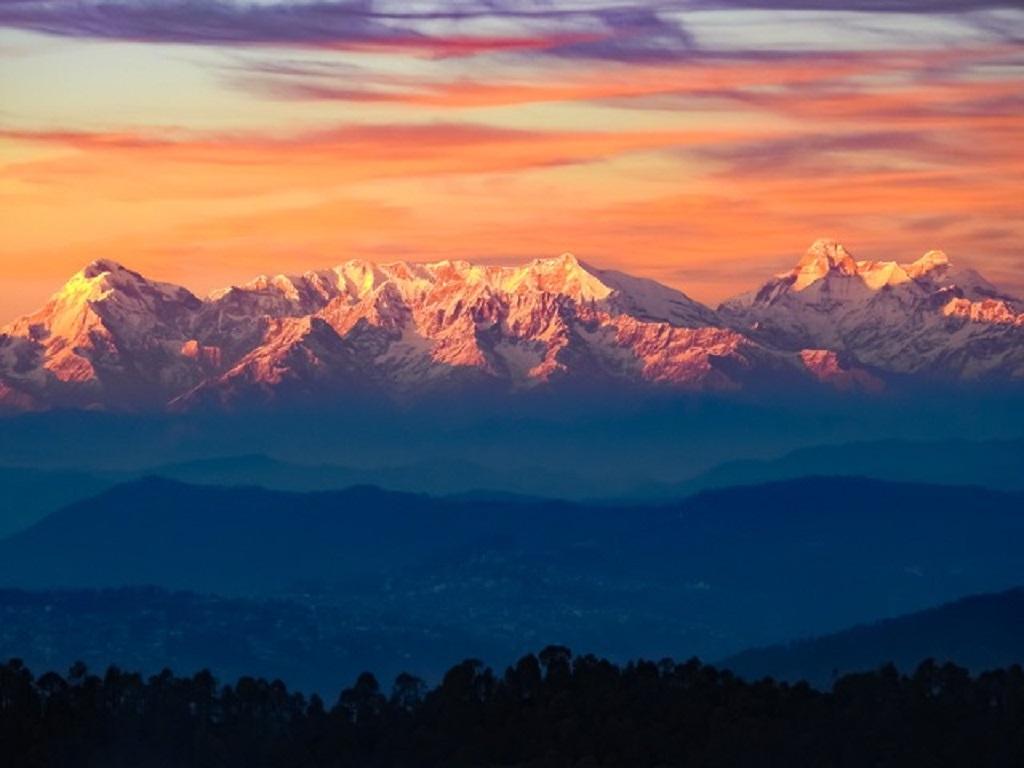 Migration is an important phenomenon with considerable social, economic and cultural implications. The ‘ghost-villages’ of Uttarakhand are well-known, abandoned by the local population who had left in search of employment, education, health, water and food security, and basic infrastructure.

The novel coronavirus disease (COVID-19) is not just a health crisis. It has highlighted the underlying economic and social inequities that are part of the fabric of our living.

It has precipitated a series of other shocks, one of which is a crisis in human movement. The current COVID-19 crisis has clearly demonstrated that migration is an important response to stress, shock and uncertainty.

Several districts in Uttarakhand received a disproportionate influx of in-migration from Delhi and other states. This has led to a skewed population profile, with non-residents seeking properties to buy, lease and rent. The impact of this has not been studied but pragmatic, humanitarian and community-oriented responses are urgently needed.

The Himalayas had always attracted the social ‘outsider’, fringe people — those seeking a natural, reclusive or ascetic life. Mostly, these individuals did not disturb the prevailing equations in their chosen homes, primarily because their lifestyle was simple, rustic, lacking ostentation and overt luxury. They were neither trying to transform the social fabric nor were they insensitive to the extremely fragile ecosystem of these young mountains.

The new migrants to Uttarakhand have, for the most part, not chosen to live in the Himalayas because they are mesmerised and humbled by nature. They come to escape the pollution and confinement of the cities, and have little idea or inclination to understand the history and culture of Kumaon or the unique particularities of Himalayan living.

They introduce, in their wake, a screensaver of privileged urban living that the rural people are confused by and seek to emulate — a potent concoction for social upheaval. 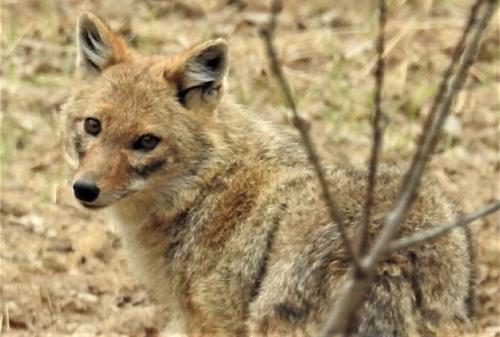 Usually, migration and its analyses have been of the disadvantaged migrating towards hope. Their immediate response is to try to blend into their new environment, making ends meet and gradually attempting to improve their lifestyle.

There is no available study of advantaged migrants who seek all the comforts and conveniences, the luxuries of their earlier metropolises while relocating to a pristine environment in a fragile, vulnerable ecosystem. The privileged are accustomed to buying what they need, not sharing scanty resources, and they tend to have an inherent insensitivity to how the other side lives.

In the absence of proactive governance focused on ethical solutions, these issues must be addressed by the educated privileged, not merely because it is the humanitarian response, but because our future depends on it.

In earlier times, the local belief was that the daytime is ours and the nighttime is for the animals. We share the same space. High walls, barbed wires, impenetrable boundaries, outside lighting at night — everything that prevents animal movement — were a no-no.

In these areas, cultural ethics meant that human beings stayed indoors at night and security was not an obsession. The ethos was to respect nature, respect all living beings and not lay claim to what was not yours. The land that was tilled by our ancestors was the precious inheritance we preserved, cared for and held in trust for those who came after us. 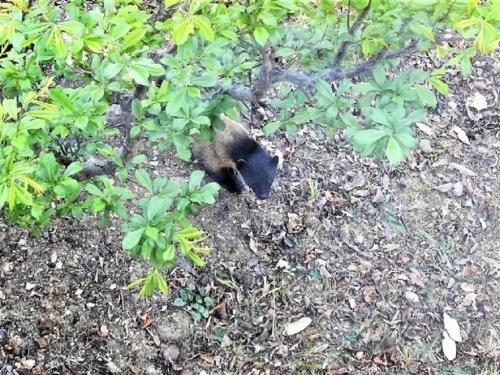 (A pine marten peeps from a hedge on what used to be a playing field.)

But the times they are a-changing. Himalayas, traditionally regarded as the abode of the gods, is now the chosen abode of the wealthy, famous and successful. These critical Himalayan eco-systems are fast becoming the desired space to live in. We must ‘own’ this paradise on sale on our own terms that are in direct conflict with sustainability.

Opportunists fill the gap between desire / need and fulfilment. Gated communities are the current rage with ‘new migrants’, a term offensive to the relocated affluent.

The intermediary — in this case, the developer — takes care of all the inconveniences that the new migrants do not want their mind space disturbed with. Some of the demands listed are road access to the doorstep, uninterrupted water supply where none exists and unlimited electricity supply in an area where the load allocated is two kilowatts per connection, and everything else that was taken for granted in the city left behind.

The new resident is mostly unaware that Himalayan living compromises these very precepts.

Groundwater levels have dipped in almost all regions of the country. The Uttarakhand Ground Water Act, 2016 addressed some issues, but was promptly repealed in 2017.

The new ministry, Jal Shakti, was launched as a symbol of commitment towards resolving the country’s water crisis. The picturesque images of rural women carrying copper kalash or vessels on their heads is not a photo op. It is the reality of a brutal living. Which is why from time immemorial, marriages here were arranged with the simple dictum, ‘lakri, pani ki suvidha’, which means long distances will not be traversed carrying daily necessities.

Where will the developer organise water, a perennial item of desperate shortage, from? The jugaadu developer organises the construction of bore wells or uses a pump at the very source the river, with all those downstream deprived of this essential commodity. His clientele wants unlimited water. Scarcity, conservation, equitable and fair use of limited resources does not apply to them.

The flood and earthquake-prone state has frequently seen natural disasters. Environment-friendly construction is paramount for sustainability. In the absence of any guidelines, regulation, permissions, developers are manifesting the cemented dreams of their clients. Sustainability is not in the dictionary of builders and their clients, whose aspirations are not rooted in reality.

Traditionally, temples were atop hills because the walk uphill emptied your mind of clutter and reduced the ego. Homes were preferred away from main roads so that the vibrations were not disturbed. Low doorways required stooping to retain that sense of humility. One never forgot one’s own insignificance in the face of the universal we sought to serve. There was no way, then, to forget to preserve the Earth.

Recently, in Chatola village, a JCB destroyed a portion of a 100-year-old paidal marg or walking path connecting several neighbouring villages, used by residents to reach home, children to walk seven kilometres to school in Mukteshwar, horses that carried load, cattle that took the path to reach their grazing grounds.

An old village water tank, which older residents say they have seen for 70 years, was totally demolished. 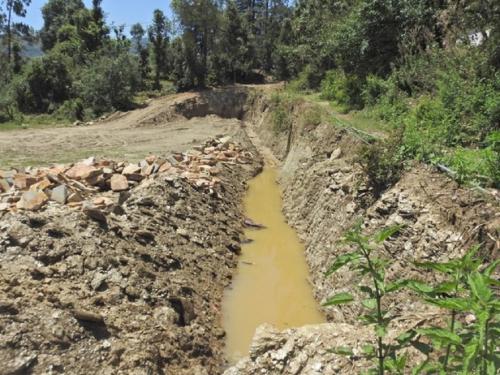 The only level playing field for youth to play cricket and volleyball, which was built under the Panchayat Yuva Krida Khel Association of Ministry of Youth Affairs and Sports, has been illegally encroached upon to build a kuccha road for JCBs, trucks and pick-ups to ply to the site of yet another development project. The rubble and stone lie scattered across the field.

The youth protested on the field, some representatives went to Nainital to meet the district authorities and they also had a meeting with the developer, Saurabh Vinayak, who has several prized projects in Mukteshwar.

His excavators had gone on a rampage on the playing field, walking trail and village tank, supervised by Naveen Bhatt, a local resident, who lives adjacent to the field, and who used the opportunity to divert the original walking trail and encroach on some land for his family while the going was good.

Cricket is now being played on sloping hills, without even a makeshift pitch, a kilometre away. The day’s game is easily disrupted when the ball rolls down the hill to disappear.

The cricket played on the destroyed field was with an enthusiasm and earnestness impossible to ignore. There are annual competitions at the block, district, state and national levels, and serious aspirants hope to improve their game.

The village youth are accustomed to their dreams being trampled on. The district authorities have maintained a discreet silence. The gram pradhan is a lady and a rubber stamp for her husband, who has transformed himself from a local taxi driver to a man with clout and is readily willing to do ji huzoori to the powers that be.

The gated communities do not ask who suffered in the building of their dream Himalayan home, what was the loss of flora and fauna, how many rabbits, pine marten, jackals, birds and butterflies escaped to seek new habitats.

“No man is an island, entire of itself…Therefore send not to know for whom the bell tolls, it tolls for thee.”