What is threatening ecology of Alappuzha? 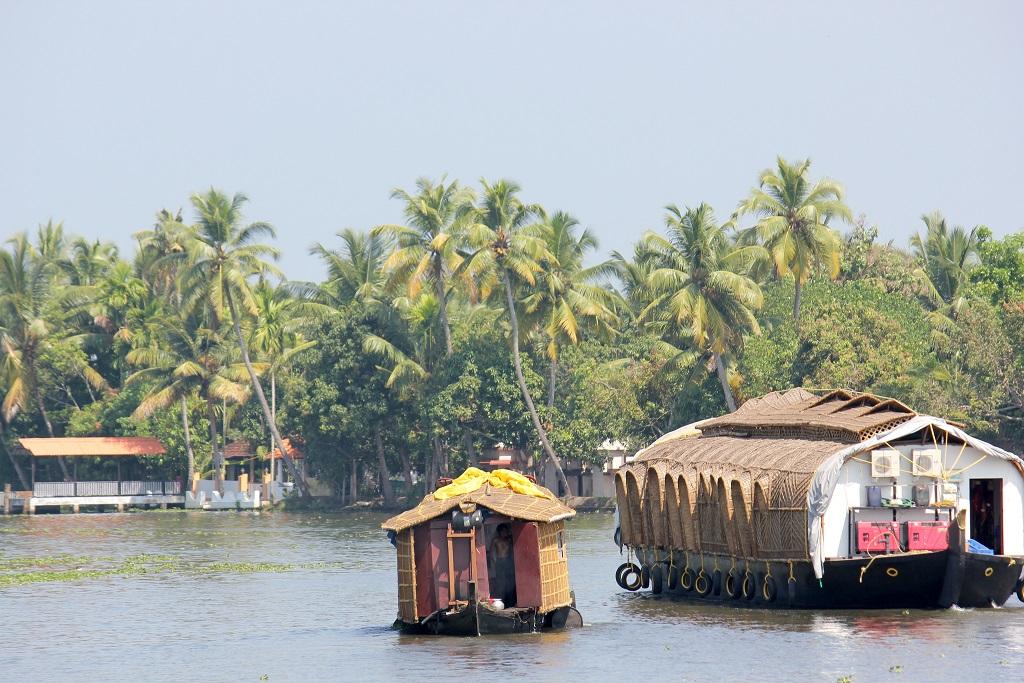 Alappuzha has 49 diesel boats which carry around 21,900 people every day; Credit: Isabell Schulz/Flickr

Alappuzha, known as the Venice of the East, boasts of shimmering waterways and a rich biodiversity. But today, the ecology of the region is under a huge threat.

Consider Kuttanad, the area with the lowest altitude in India. Part of India’s largest wetland, Vembanad Kole, Kuttanad region occupies more than 110,000 hectares. It was manually reclaimed from Alappuzha and Kottayam districts and is highly fertile. Kuttanad has an average elevation of one metre above mean sea level, and has a population of 20,000.

Known as “the rice bowl of Kerala,” Kuttanad is one of two places in the world where agriculture is practised below sea level. Bio-bunds made of mud, coir, banana waste and bamboo check seawater intrusion and provide an indigenous de-watering and pumping mechanism; pettium parayum is a local mechanism which channels water to the fields. Goose rearing, poultry, coir making, fisheries and horticulture are the common sources of livelihood which also help conserve biodiversity.

With almost 20,000 waterfowls, including the endangered spot billed pelican, oriental darter, water cock and black billed tern, the wetland is remarkable for its migratory bird population. Due to a mix of saline and fresh water, the wetland has a rich diversity of clam, shrimps and live and sub-fossil deposits, several species of fin fish, shell fish, the endangered golden catfish, the Pearl spot, perchlets and freshwater giant prawns. The region is also known for its rich flora diversity. It has several species of algae (green, blue, yellow brown), desmids, agiosperm and rare mangroves.

Most of the settlements in Alappuzha, especially lower Kuttanad, are accessible only by waterways. According to the State Water Transport Department (SWTD), the district has 49 steel boats which run on diesel. These take 123 trips per day and carry around 21,900 people per day. Despite the demand, the sector has been neglected by the state government. According to the National Transportation Planning and Research Centre (NATPAC), the fleet utilisation is only 56 per cent. In spite of the poor infrastructure, improper maintenance of canals, the system survives because riders don’t have other feasible options.

Needless to say, the state government should encourage innovations in the inland waterway system to provide better transport options for locals as well as tourists.

Houseboats and shikharas need to be regulated

A common sight in Alappuzha is the mesmerising houseboat. But the lack of regulation by the SWTD can have adverse effects on its ecology. Today, Alappuzha has 1,400 houseboats and shikaras, of which 400-500 boats are running without certificates, many don’t follow fixed routes or even speed limit/regulations. Moreover, they discharge 230,160 litres of untreated waste water into the Vembanad lake. Oil spillages from the boats, CO2 emissions, noise pollution and vibrations are some of the other issues ailing the region’s ecology.

The 2016 drought in the state, which was the worse in more than 100 years, damaged the transport system of Alappuzha significantly. “Water level decreased to such a level that it is difficult to take boats near the jetties. Low water level also affects the functioning of boats. If the situation gets worse, it will be difficult to take the boats to canals,” complained C S Muraleedharan Nair, Principal Station Master, Alappuzha. Due to a destruction of feeding places and habitat change, the indigenous bird count declined from 1,000 in 2015 to 247 in 2016.

Solar ferries, which were introduced early this year by the state government, can prove to be environment-friendly. Apart from reaping a substantial carbon credit, it can be a sustainable alternative to the water transport system. The silent, no-emission ferries designed with 78 solar panels on its roof can sail for 6.5 hours on a sunny day with 75 passengers at 13.8kmph. Conventional boats run at an average speed of 9.5 kmph for 10 hours a day. They consume nearly 50,000 litres of diesel per year, which accounts for Rs 3.22 million, excluding other maintenance costs. Diesel itself accounts for 45 per cent of the expenditure for a conventional boat.

A litre of diesel emits 2.47 kg CO2, so a year’s worth of diesel will generate 140 tonnes of CO2 emission. One tonne of carbon dioxide is equal to one carbon credit.

The cost of building solar ferries is about one-third the cost of conventional ferries. The operating cost of a solar ferry is 40 units of electricity, which amounts to Rs. 420 per day, or Rs 150,000 per year.

Thus, the state government should encourage subsidies and other benefits to use solar power for houseboats.