Hedgerows, reservoirs of biodiversity, quietly fade into extinction in Kerala 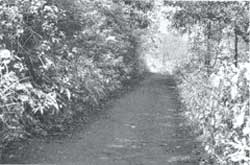 HEDGEROWS, once an essential feature of the Kerala landscape, are fast giving away to the march of barbed wire and concrete fence. After centuries of service, hedgerows have suddenly become unwanted vegetation. Owners nowadays prefer to enclose their properties with a wall or with barbed wire. The green verges disappear, ostensibly to control weeds. With the pressure on land tightening, planters and farmers also tend to remove all "unproductive" clumps of greenery around their fields.

This is the result of an average citizen's inability to understand the significance of hedgerows. Hedgerows are not seen to have any useful role and are being wiped out for some other seemingly more useful, purpose: gone are the hedges, the wild ferns, the native shrubs adorned with blossoms and berries. And, of course, the many species of life that rustled and chirped in the shrubbery.

Many small birds and animals that depend on hedgerows to live in, breed and hunt are rapidly losing their habitat. Species diversity is virtually absent in a well-tended forest area grown as a part of a social forestry programme. A world of difference from hedgerows that enrich the diversity of life. For instance, more than 800 types of plants, from the common lantana to rare ferns, are found in the hedges of Kerala.

Hedgerows serve as a substitute for woodlands, providing a home to small mammals like mongoose, rats and rabbits. The virtually-extinct tree frog is also found in hedgerows. Birds like babblers, sparrows, my-nahs, magpies and tailorbirds breed and forage for worms, berries and nectar in and around the green verges. Washed away in the high tide of development, hedgerows have become a luxury in the towns and cities of Kerala. The villages follow suit in their quest to ape city life. Kerala, as a result, has lost more than half its hedgerows in the past 2 decades.


Green verges, once the state's richest reservoirs of flora and fauna, are being torn up to make way for farming. Farmers tend to think that hedges are breeding grounds for weeds, mice and other pests and that they shade the margins of fields which cause the grain along the edges to ripen unevenly. And, above all, they take up productive space. So, away with the hedges.

Hedgerows still dot the countryside and suburban areas in the northern districts of Kerala. In central Kerala, they have almost disappeared from urban and semiurban areas and are fast making an exit from the countryside. In the southern district, they are disappearing at an even more alarming rate. Wynad in northern Kerala is the only district in the state where plump hedgerows are still plentiful.

The future of hedgerows cannot be secured unless serious conservation efforts are undertaken. The surviving hedges must be defended and the neglected restored. It is unrealistic to expect farmers and planters to maintain their hedges just because ecologists find them useful. Therefore, appropriate incentives have to be given to them.

We must also take many vital decisions. Will a hedgerow be valued over a highway? Will the hedges on unused plots survive housing development? Will hedgerows be saved because their biodiversity is a resource for the present and the future?

Leela Sebastian is a freelance writer based in Kottayam, Kerala