Fascism on the internet 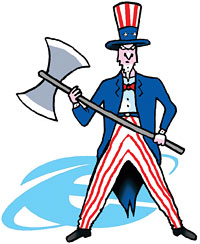 It’s been mayhem and murder on the web with the US government and the McCarthy-like Senator Joe Lieberman, who chairs the Senate Homeland Security Committee, getting websites to pull the plug on WikiLeaks. Not all of what they did was sane or even legal. First, Lieberman, or the Obama administration acting through him, issued a warning to Amazon.com to cut off WikiLeaks. Just a phone call from the office of the senator with right inflexion was enough to do the job.

Then he got Tableau Software, which provides a free web platform for interactive graphics, to remove from its site charts detailing not the documents themselves but a compilation of the material released by WikiLeaks, such as how many of the documents originated from each country, the chronology, etc. As commentator Glenn Greenwald writing in Salon notes: “These charts contained no classified information whatsoever, and disclosed nothing about the content of the cables. It was the completely innocuous work of a freelance journalist to inform the public about the categories of documents released.”

Amazon claims it cut off WikiLeaks because of “terms of service violations”, but no one is buying that defense. Pressure clearly was mounted on it—and it caved in. As for the Tableau episode, Greenwald says “benign, purely legal documents” were pulled off the Internet in response to Lieberman’s demands and implied threats. “He’s on some kind of warped mission where he’s literally running around single-handedly dictating what political content can and cannot be on the Internet, ” he fumes.

These actions, which come in the wake of the November 29 seizures of 82 websites selling counterfeit goods, including golf clubs, handbags, sporting equipment and pirated movies and music by the Immigration and Customs Enforcement agency of Homeland Security, are exactly what critics of a proposed law have been warning us about. The Combating Online Infringements and Counterfeits Act (COICA) is ostensibly focused on copyright infringement and counterfeit trade, but those who have been studying its provisions fear that it is nothing less than an Internet censorship bill. They say that vast amounts of non-infringing content, specially political material, could vanish from the Internet if it is passed.

The main intent of the bill is to meddle with the Internet’s domain name system (DNS). The DNS is a system that turns domain names, http://www.cseindia.org, for instance, into the IP addresses that computers use to communicate. A DNS provider cannot stop web users from going where they wish to. What COICA aims to do is to subject DNS operators to government and industry pressure to intercept and block traffic to sites they don’t approve of.

The bill, which is making its way through Congress, also gives the Department of Justice the power to force DNS operators to make sites vanish from the web by creating a blacklist of censored domains; the Attorney General can ask a court to place any website on the blacklist if infringement is deemed “central” to the purpose of the site.

Sure, there are websites that are devoted primarily to posting copyrighted material. So should the entire web be held hostage to the paranoid concerns of special lobbies? This could well happen because the official dragnet could be extended to file-storage services or even to Facebook. Why Facebook? That’s because large amounts of copyrighted material are posted there by members of the social networking group.

Since DNS blocking operations would target entire websites and not merely the offending content, legal content on these sites could be censored by the US authorities.

The alarming possibilities that COICA opens up would make the witch hunts of the McCarthy era seem far less lethal. That such a law is being contemplated in this day and age by a country which claims to be the staunch supporter of freedom and free speech raises a disquieting spectre. And not surprisingly, the hand of industry, it turns out, is clearly behind the proposed legislation. In this case, it is the Recording Industry Association of America (RIAA), an industry lobby that has consistently failed to understand what the Internet is all about.

Characteristic of its truculent stand on file sharing sites was the recent statement by RIAA CEO Mitch Bainwol on the COICA. “We are proud to lend our voice to the chorus of supporters of this important bipartisan legislation. In a world where hackers and copyright thieves are able to take down websites, rip off American consumers and rake in huge profits operating rogue businesses built on the backs of the American creative community, the committee has taken a strong step toward fostering a more safe and secure online experience for consumers.”

It is, of course, a laughable statement. Few consumers would believe they are being ripped off by music sharing websites. If anything, most consumers, and citizens the world over, fear that they are being taken for a ride by industry and a Big Brother government that supports it.