A recent paper of the Union Ministry of Environment and Forests (MoEF), Towards an Emission Trading Scheme for Air Pollutants in India, explores the possibility of introducing a permit and trading system for air pollutants from industrial sources. The scheme operates along the lines of the cap-and-trade mechanism for greenhouse gas emissions. Units that keep pollutants well below stipulated levels can trade their credits with those that pollute in excess of standards.

But environmental governance in India has often been marred by poor implementation. The Environmental Impact Assessment Notification of 2006 and the Coastal Regulation Zone Notification of 2011 are under close scrutiny, while the proposed National Environmental Assessment and Monitoring Authority faces criticism. Besides the implementation challenges, a more worrisome question is whether the cap-and-trade system would be appropriate for the country.

A parliamentary report in 2008 highlighted that poor infrastructure in monitoring pollution is an important reason for weak implementation of environmental laws in the country. This points to a critical lacuna in generating air quality information and assessing the health of the environment.

The India Pollution Map, a project of the Chennai-based Centre for Development Finance, has tracked the government’s pollution monitoring regime and has mapped aspects of air quality. Data and information received from government sources reveal a majority of large-scale industries are compliant with the National Ambient Air Quality Standards (NAAQS). This raises two questions: Is the data correct? And if the pollutants in majority of industries are within limits, where is the scope of trading?

The trading scheme is likely to get mired in controversy till such questions about data accuracy are addressed. The recenty revised NAAQS are yet to be fully implemented. We do not have new emission standards for pollutants like volatile organic compounds and poly aromatic hydrocarbons, barring benzopyrene. These are some of the more toxic air pollutants emitted by the petrochemical industries. 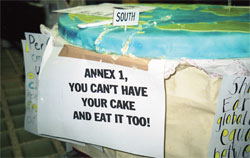 Before forwarding to an air pollutants trading scheme, MoEF needs to re-evaluate its priorities. In the backdrop of the current environmental governance regime changes and existing legal mandates, a system such as a Toxics Release Inventory (TRI) would be more suited in enabling better compliance of environmental laws. The US Environment Protection Agency defines TRI as “a publicly available database that contains detailed information on toxic chemical releases and other waste management activities reported annually by certain covered industry groups and federal facilities.” India can also learn from the experience of Europe and North America where environmental justice communities have used TRI data to empower citizens and to hold companies and local governments accountable in managing toxic pollutants.

In India, there is a legal mandate for TRI. A Supreme Court order of October 14, 2003, states: “SPCBs should ensure all industries involved in hazardous chemicals and generating hazardous wastes display data outside the main factory gate, on quantity and nature of hazardous chemicals being used in the plant, water and air emissions and solid wastes generated.” The Factories Act of 1948 mandates disclosure of information about pollutants in factories to workers; the Chemical Accidents Rules of 1996 direct giving information to public about industrial releases.

A TRI system would fill two important gaps: improve knowledge of pollutants and pollutant loads from specific industrial sources, and help restructure the architecture of industry-disclosed information. TRI could complement pieces of legislation like the Right to Information Act to meet the mandates of proactive public disclosure of information. In the long run, this would facilitate an air pollutant trading system if that is f ound to be necessary.

No doubt, compliance with environmental laws has been poor in India but reforms cannot be led by stand-alone schemes. The efforts should get the support of people affected by environmental pollution.

Rajesh Rangarajan and Sivapradha C R are with the Centre for Development Finance. The views expressed are personal