Floods and the Politics

Shalini Dhyani travels to Chinyalisaur to find out how heavy rains coupled with rise in water of Tehri dam has devastated the area. 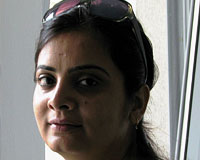 Heavy rains since July have badly damaged the road network in Garhwal division of Uttarakhand and hampered the chardham pilgrimage this season. Since last few days excessive rise in water level of the much-hyped Tehri dam is the breaking news in most regional TV  channels.  Although I am not a anti-dam protester yet, it is tough to support the need of these massive structures in fragile and tectonically active landscape of Himalayas.

Around forty villages out of the total sixty nine in Chinyalisaur block of Uttarkashi district in Garhwal have been affected by seepage of water from the dam. A 10-km road from Jogath to Badangaon is under threat of being washed. All this because the Tehri Hydro Development Corporation (THDC) raised the water level of the dam to 830 feet, above the normal limit. Chinyalisaur is an emerging tourist place enroute to Gangotri and Yamunotri. A new 1.5 km long air strip is also under construction there.

Uttarkashi has witnessed a number of natural disasters. In 1971, a flood completely changed the map of the district, in 1992 it was devastated by an earthquake that claimed thousands of lives and in 2004 it was hit by heavy landslides caused by cracks in the mountains from the earthquake, aggravated by the unusually heavy monsoon.

I decided to visit the dam site and Chinyalisaur block where water has been playing havoc. Travelling in Garhwal during monsoon is less of pleasure and more of problem. Every five to ten kms, you get stuck and have to wait for the road to be cleared of the debris accumulated because of frequent landslides. Though, this situation is quite common every year, but this time it is worse. In the last few weeks many towns in Garhwal did not receive their daily  requirements like vegetables, milk because of frequent road blocks. Thousands of tourists of chardham yatra were also stranded.

I took a bus at seven in the morning so that I can reach Chinyalisaur by evening. Luckily, I got a window seat. After about three-and-half hours bus crossed the road near Tehri lake. I could see a tremendous increase in the water level. At around four in the evening I reached Chinyalisaur, but it was almost impossible to enter the place as it was completely submerged. I could see many houses underwater. Many houses 200-metres away from the dam had also developed cracks. People are living on road and incessant rains are making survival of these people tough.

While talking to few people I came across  B M Bahuguna, Manager of a government rest house at Chinyalisaur. “Many houses in the village have almost submerged and few shops too got washed away. I too with my staff have moved to the third floor. The situation in the village is getting grim,” he said. On the second day, I met few more residents of the area. They were all disappointed by Chief Minister Ramesh Pokhriyal Nishank not announcing any relief amount during his visit.

At a time when rains are breaking the record of last 10-years in Garhwal (See Box) and people continue to fight for their existence, state government and THDC officials are busy in war of words ignoring their plight. Irrigation Minister Matbar Singh Kandari, who visited the affected area recently, demanded a package of Rs 450 crore for the rehabilitation of the affected people and blamed the THDC for functioning in an arbitrary manner by raising the water level in a clandestine manner by seeking permission from the Supreme Court and keeping the state government in the dark about it. On the other hand, A L Shah, Chief General Manager, THDC criticised the state government for playing dirty politics in a bid to hide its own shortcomings.

“We acted as per the verdict of the Supreme Court in this case which was announced a fortnight ago. It is wrong to say that the state government was not aware of it as it was fighting against us through its six advocates and was fully conversant of each minute detail. As far as the villages are concerned, it is the state government which got drubbing from the Supreme Court for not having taken any action for the rehabilitation of these villagers for the last five years. How long we could have gone on waiting for it to act without bothering about our own colossal losses,” he said.

Shah also made it clear that the corporation which was supposed to give Rs 2.88 crore for the dwellings which got affected due to the raised water level had paid Rs 2 crore to the administration and the rest of the amount too would be given within three days. He said the towering figure of Rs 450 crore as compensation for the recent crisis and total Rs 5,000 crore demanded by the state government as a rehabilitation package was “sheer political gimmick”.

But there is one question that I still wonder while returning from the not so pleasant journey: Is this the prospect of all upcoming and already working dams in Uttarakhand and other mountain states of India? and If Yes, what actually people dwelling in resource rich but fragile remote terrains are actually receiving out of all these developmental activities?