Flower delicacies of the Northeast

I have vivid memories of my late grandmother plucking papaya flowers off the trees in her sprawling garden. She would often gather a handful from each tree; once her little bowl was full, she would rush into the kitchen and fry them in little oil, adding a pinch of salt for taste.

After she passed away, I saw my mother do the same for years. On some occasions, these fried papaya flowers were a part of our meal. It is bitter but has a flavour which only those who love bitter gourd can appreciate. Papaya flowers are often consumed for treating diabetes.

People in the Northeast are in the habit of eating all sorts of edible flowers, whether from trees, plants, herbs or shrubs. Come to think of it, there are so many edible flowers that grow so abundantly in homes and forests; the local markets stock a variety of them. Flowers of pumpkins, ginger, onion, mustard and banana are common; there are many more and I don't even know what they are called in English.

During a culinary class in Bangkok a year or two ago, I remember our instructor, Tam Piyawadi Jantrupon who runs a cooking class by the the Choa Phraya River in Bangkok, plucked fresh flowers from her garden and fed us some exotic fare. She served many edible flowers that were delicately batter fried with accompanying sauces. Some of these flowers are commonly found in the Northeast, which reaffirms Thailand’s cultural affinity with the Northeast. The only difference, perhaps, is Pam’s delicate and refined style of preparation.

Edible flowers, the ones I can lay my hands on, are an important part of my daily cooking. I use ginger flowers for garnishing lentils and non-vegetarian dishes. I love onion flowers for their delicate flavour; it's great for garnishing.

Here are the names of a few edible flowers that are a eaten as delicacies in the region:

Leibak kundo: It is a leafy vegetable eaten along with the stem and flowers in Manipur. Portulaca oleracea, as botanists would call it, is great for preparing saag, a dry-fry dish which makes a good side-dish. In Greece, I have seen the stems mixed into Greek salad in a couple of restaurants.

Nongmankha: It is a sprawling shrub (Phlogocanthus thyrsiforus) with tubular flowers, commonly found in Manipur. The flowers come in two shades—white and yellow. The shrub grows wild in my neighbour’s garden in Imphal and I must confess that I have plucked these flowers from their garden without taking permission a couple of times to use in my kitchen. In Manipur, people use these flowers for preparing a dish called kangngou, a dry-fried dish quite like a bitter gourd preparation. Another popular dish is sumtak, a bitter tasting dish in which the flowers are fried in oil with small fish. In Assamese, the flower is called titaphul, ronga bahak or titabahak. The shrub usually flowers from December through February. Sometimes, it is also roasted by wrapping it in a banana leaf. People love it for the bitter taste. My friend Ananta and Leena Saikia in Jorhat, who have a chilly farm, tell me that this is used for various medicinal purposes. Sometimes, it is dried and stored for future use. 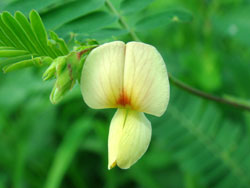 Chigonglei: These are rare flowers, usually associated with a particular occasion in Manipur. During Cheiroaba, the new year of the Meitei community, people use thse extensively. Aeschynomene aspera is its botanical name.

Hangam: It is nothing but mustard flowers (Brassica camperstris), dark yellowish in colour. Mainland India would leave the flowers untouched for the mustard seeds and oil, but in the Northeast, the flowers are a delicacy; they are used to make a vegetable soup. The flowers are cleaned and boiled without any herbs, not even salt, and the soup is consumed in a mug along with meals. It is slightly bitter. Called champhoot or antui, it aids in digestion.

Laphu tharo: It goes by the botanical name Musa paradisiaca and is nothing but banana flower. You find these in all local markets in the Northeast. I have relished a particular dish called ironba, a popular dish made of mashed potato, beans, chillies and dry fish. You can make ironba just with the flowers, chillies and dry fish. In Assam, it is called koldil and is a rather common vegetable. It is also eaten pickled.

Lomba or lengmaser: It resembles the flowers of basil and tulsi, only the fragrance tells them apart. The plant, Elsholtiza blanda, grows mostly in forests. Rarely have I seen it in people’s kitchen garden. The Nagas will have it in their kitchens all through the season. So will the Mizos and other communities in the region. It is redolent with a captivating aroma which can change the flavour of a dish. It is usually dried and preserved for months. It is great for garnishing both vegetarian and non-vegetarian dishes. I mostly use this for a typical Northeast dish made of arbi (colocasia). 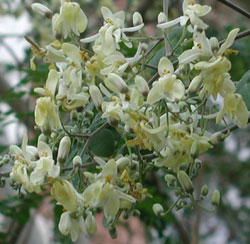 Sajina: We have heard of drumsticks but not quite the flower of this tree called Sajina in Assamese. Moringa oleifera is a middle sized soft tree and the flowers are small, whitish and honey-scented. The tree usually flowers in January till March. While drumsticks are great in sambhar, the flower is fried in oil. Use of this flower, however, is not restricted to the Northeast. A relative told me how her mother used these flowers for preparing vegetarian dishes in Nagpur.

Ghora neem: Some tribes of western Assam prepare dishes from the flowers of this deciduous tree with pounded rice. Melia azadirachta bears  small, white flowers tinged with purplish blue. It usually flowers through March to May and is quite bitter in taste. “Leaves of the tree are used in treatment of skin diseases and to kill worms in both humans and domesticated animals,” is what Ananta Saikia, an agriculturist tells me.

Bhat meteka: It is the Assamese name for Monochoria hastate. People in lower Assam treat this as a delicacy and make sumptuous dish out of this with fish. You will find the Bodos and Koch-Rajbongshis among others relying on this flower whenever they want something quite different. It is a herb with creeping root stock and usually grows in swamps or shallow water bodies like ponds. Sometimes, it is also found in paddy fields.

Sewali phul: It is a white flower which is fragrant. People in Assam grow Nyctanthes arbor-tristis near their bedroom as it perfumes the air during the night. It flowers in September and October and is quite a popular cooking ingredient in Assamese homes. The flower is slightly bitter and can be used to make a dry subji. The leaves are used for making curry. It is said to destroy intestinal worms and is also said act as an aphrodisiac. The leaves are also used to treat skin diseases.