Overprocessed chemical-laden stuff is bad for you; it’s pure malevolent junk. George Zaidan has chosen this junk food truth as an excellent starting point for his book

Do I dare to eat a Cheeto? I do not; I can’t even let one into the house. The same goes for its delectably plump twin, the Cheez Doodle; its tasty rotund cousin, the Cheez Ball and its heavenly brother by another mother, that sandwich of two Cheezy crackers glued together with peanut butter.

I dare not even walk down the supermarket aisle where this neon orange family lives, for while others may succumb to chocolate or pastry, my Waterloo is this cheesy goodness — let's call it Cheez. One Cheez Doodle would lead to a bag, then to more bags and then to the certain catastrophe of a larger, sicker me.

I know these delicacies are terrible for a person’s health. How exactly do I know that? It’s not because I’m a medical professional, that’s for sure; there were zero discussions of Cheez in our pre- or post-graduate training. I know because I just know, is all. Overprocessed chemical-laden stuff is bad for you; it’s pure malevolent junk. Everyone knows that. 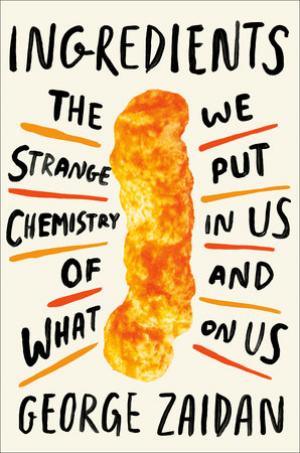 BOOK REVIEW — “Ingredients: The Strange Chemistry of What We Put in Us and On Us,” by George Zaidan (Penguin Random House, 320 pages)

George Zaidan, an MIT-trained chemist of contrarian bent, knows it too. That is, he knows it to be piously reiterated received wisdom and thus legitimate fodder for dissection, examination, refutation, and cheerfully self-indulgent obscenity-laden riffs.

Further, he has chosen this junk food truth as an excellent starting point for Ingredients: The Strange Chemistry of What We Put in Us and On Us, an entertaining and enlightening jaunt around the perimeters of exactly what we can ever hope science can teach us about stuff that is good and bad for us.

And it all begins with a single Cheeto, the putative first brick on the winding golden road to nutritional hell.

Zaidan describes himself as a science communicator and holds a day job producing videos for the American Chemical Society. On YouTube, where he interviews scientists or examines the ingredients in such common household items as toothpaste and lipstick, he comes across as a perfectly pleasant, sober, intense young geek.

On the page, though, he is somehow transformed into a wildly inventive, disheveled, irreverent comic — a little stand-up here, a little frat house there, and a gigantic quantity of general subversion. All is delivered in the fluent lingua franca of the text and Twitter generation (which is to say that more than once I had to look up the definition of some impenetrable group of consonants).

Zaidan takes the easy shots first. Foodstuffs with chemical content are terrible for you: Could any sentiment be more likely to provoke a chemist’s inner, er, chemist? Zaidan cheerfully considers some candidate methodologies for distinguishing among the chemicals that compose the entirety of all food. He offers up and then disproves the theory that the more total syllables in any list of ingredients, the worse for the health of the consumer.

He pivots around to contemplate the currently popular sentiment that most of our intake should be plant-based, and reviews some basics of plant biology, including the liberal quantities of dire poisons elaborated by many plants.

From there it is but a quick leap to the ‘word process’ — as in highly processed junk food, but also as in the methods the earliest humans used to detoxify their plant foodstuffs. (When it comes to poisonous wild potatoes, the trick is to coat them with a little clay and eat both; a water bath will remove the cyanide from cassava root.)

Then there are history’s many efforts to stop food from spoiling by processing it: Brining, drying, fermenting, and the rest. Is an innocent little Cheeto truly more processed than a dill pickle, or a slab of dried salt cod, or a tablespoon of honey (otherwise known as ultra-processed nectar)?

Zaidan considers the valiant members of the bacterial genus Lactobacilli, heading in for a day’s honest labor processing a quart of milk: Each one “eats sugar, excretes lactic acid, and reproduces at speeds that make rabbits look like nuns. In the rich tradition of ancient Rome, they eat, drink, multiply, vomit and then pass out,” leaving behind a “corrosive hell-swamp, 100 times more acidic than milk and absolutely unlivable to the vast majority of all other microbes, including and especially the ones that make us sick.’’ That swamp would be yogurt.

In other words, it’s hard to sustain the proposition that processed foods are necessarily to be avoided.

Once the semantics have crumbled in face of a satisfying quantity of science, Zaidan heads off into the methodologic and statistical morass of nutritional epidemiology.

After all, the chemical composition of individual foods means little, health-wise; it’s the content of a lifetime of meals that counts. Here the author’s inner chemist yields the floor to a reasonably sage if still comedic inner statistician as he methodically enumerates the mathematical potholes awaiting researchers seeking to mine the kind of big data contained in diet studies.

There is little included here not available on various science blogs, but it never hurts to hear it again, from the unsurprising news that scientists can both make and merrily publish simple arithmetical errors that bolster their results, to the perils of the mindless adulation of the ‘statistically significant’ p-value. (This is the calculation that allows scientists to conclude the results of any given experiment are very unlikely to be due to chance alone.)

Massaging big data sets for meaningful correlations legitimized by their p-values — ‘p-hacking’ — turns out to be an excellent way to achieve great things in diet studies by publishing sexy, headline-making, utterly meaningless results.

And of course, even when correlations are actually legitimate, they must be examined carefully: Just because two things rise or fall together doesn't mean they embody cause and effect.

Meanwhile, the news media breathlessly trumpets every passing food breakthrough, especially when it contradicts last week’s breathless breakthrough. Zaidan’s advice about food-related health news: “Treat it like a kitten: Have fun playing with it, but don't let it change your life.’’

He briefly leaves the stomach for the skin to review the science behind our current national sunscreen obsession and concludes more or less the same thing.

After all, possibly the only incontrovertible piece of scientific wisdom we do have about an invaluable health promoting behavior (don't smoke, period) was cobbled together long ago with a variety of primitive statistical tools we have all but outgrown. And people still smoke.

As for the Cheez family: Eating one doodle or 10,000 may not be all that bad for you, Zaidan concludes, depending on a host of factors. However, not eating any of those 10,000 doodles may well be somewhat better.

“To really understand the issues with nutritional epidemiology or any other science, you have to learn how to appreciate its beauty — and its flaws,” he writes. “You have to learn to spot a mistake or logically tear something apart. You have to sniff out alternative explanations or an argument’s weakest link.

In short, you have to see the best in people, but you also have to be kind of an asshole. Don't worry; it’s really fun.”

Indeed, others have written insightfully about medical statistics (Charles Whelan), the flaws inherent in diet studies (Gary Taubes), the internecine scientific warfare surrounding food groups (Marion Nestle), and about the annoying fact that plenty of foods apparently can be both good and bad for you, depending on a variety of factors (any random author in any issue of any health magazine you care to name).

No one to my recollection has wadded it all up together with as much exuberance and charm as Zaidan.

Abigail Zuger is a physician in New York City and a longtime contributor to The New York Times.

This article was originally published on Undark. Read the original article.