Green leafy veggies are rich in vitamins and minerals

Biodiversity conservation may sound complicated but it is a fairly simple concept that can be implemented at every level of society. From remote villages with low accessibility to cities that are centres of trade and commerce, the basic principle underlying these efforts is to identify, protect and promote native flora and fauna in situ.

A mix of species and habitats allows Earth’s ecosystems to keep up with challenges like population growth and climate change. Often overlooked — but essential for the survival of life on Earth — is the understanding that plants, animals and microorganisms provide us with ‘ecosystem services’.

These life-sustaining services include producing oxygen for us to breathe, storing (or sequestering) carbon from the atmosphere, cleaning our water sources, breaking down waste, pollinating crops and flowers and dispersing seeds.

Every species is an integral part of the food chain and contributes towards the complex relationships that sustain life on Earth and maintain a balanced natural ecosystem. Protecting every species is, thus, important.

One of the critical aspects of biodiversity is its crucial role in food, nutrition security and subsequently human health. Today’s key challenge is how to increase production to meet the growing demand for food, fuel wood, feed and bio-energy while conserving biodiversity.

It is needed to sustainably produce enough nutritious food in the face of challenges such as climate change and growing populations with changing diets. Production should address not only the quantity of food or calories but high nutrient values such as vitamins, minerals and other micronutrients.

In agro-ecological systems, maintenance of biological diversity is important for food production and conserving the environment, both of which are necessary to sustain life and livelihoods.

The causes of malnutrition and under-nutrition may be easier to understand if changing food habits of the general populace is observed over the years.

Local greens have vanished from the plates of people, who are now used to consuming only a few types of cereals, pulses and vegetables and are used to live with minimal kitchen-garden space.

The solution to malnutrition may lie closer home and need a rethinking. Instead of dosing people with genetically modified organisms and artificially enriched food, why not conserve backyard biodiversity and help people and ecosystems?

There exists a vast resource of undermined plants that can help partly alleviate current problems of malnutrition and under-nutrition, especially in rural areas where malnutrition is increasingly being seen as a consequence of enforced dependence on external food resources mostly obtained from large scale commercial agriculture systems.

Green leafy vegetables (GLV) are a part of the larger biodiversity and are an integral part of the diets in eastern India in states like Odisha and West Bengal. They play a significant role in our nutrition and diet and are also used as medicine since ancient times. They are also important sources of protective foods.

It will, thus, be crucial to promote GLVs, especially in backyards. Women play an important role in rural areas in establishing and maintaining backyard nutritional gardens.

GLVs are considered natural caches of nutrients for human beings. They are a rich source of vitamins like ascorbic acid, folic acid, vitamin C, tocopherols, β-carotene and riboflavin as well as minerals such as iron, potassium, magnesium, calcium and phosphorous.

Supplementation of a mother’s diet with GLVs can cover the deficiency of micronutrients and affect the health and weight gain of the foetus. Inclusion of greens in the daily diet can help prevent anaemia and promote good health.

Imparting knowledge on GLVs will help alleviate this problem by not just providing a ready list of locally available nutritional foods, but also preserving biodiversity. People tend to conserve what they find useful.

The overlapping nutritional and medicinal benefits of GLVs provide better support for human wellbeing. There are hundreds of edible herbs used in the day-to-day kitchen in different forms.

Humans have tremendous knowledge on edible plants before civilization. Traditional vegetables are valuable sources of nutrition in rural areas.

GLVs hold an important place in well-balanced diets: They are the cheapest of all the vegetables, richest in their nutritional value and within the reach of the poor.

Plants used for their medicinal attributes may contain phytochemicals with pharmacological and physiological properties. GLVs represent an important proportion of foods with medicinal value.

During pregnancy, women are highly conscious about their diet because a healthy diet is beneficial for the mother and the developing foetus. The risk of metabolic syndrome, cardiovascular diseases and inflammation is reduced by a high intake of vegetables in the diet.

GLVs are also recoomended to be supplied to pregnant and lactating mothers and children under five to address the issue of severe acute malnourishment in targeted government nutrition programmes.

Some GLVs that play an important part in alleviating hunger and malnutrition are described below: 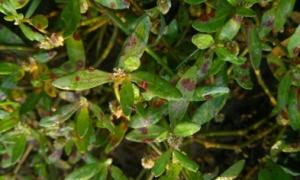 It is an aquatic plant known by several common names including Ponnanganni, Ponnagantiaaku, Honnagone, Sessile Joyweed and dwarf copperleaf. In Odisha, it is popularly known as Madaranga Saga and regarded as a leafy vegetable with a traditional and ethno-medicinal value. 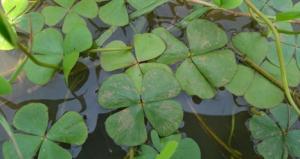 It is an edible GLV and an important marketable species that has a significant role in the lives of tribals. Inventorisation of this plant species that is being used since time immemorial in the area was undertaken with the aim to promote it for ex situ conservation outside its natural habitats for wide use by other communities. 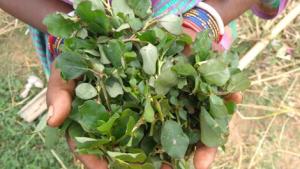 The whole plant of Trianthema decandra is edible and used medicinally. Its roots are aperient (mild purgative or laxative) and are useful in treating hepatitis and asthma. It is given with milk for orchitis (inflammation of one or both of the testicles). The juice of the leaf is dropped into the nostrils to relieve migraine. 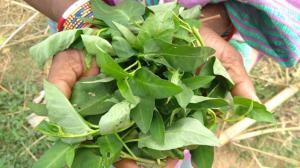 It is a semi-aquatic, tropical plant grown as a vegetable for its tender shoots. It is a rich source of vitamins, minerals, proteins, fibers, carotenes and flavonoids with many health benefits. 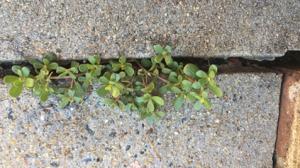 It is consumed as a GLV and also used as salad. It has a slightly sour and salty taste. 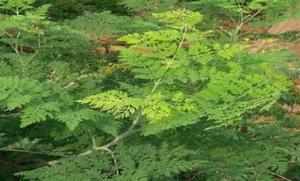 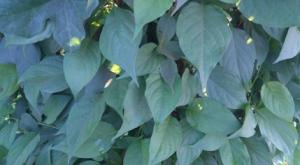 It is commonly known as Gandha Prasarini and is a climber-plant used as a leafy vegetable and important ayurvedic medicine. Its leaves are used by the people for joint pain, paralysis, etc.