Down To Earth articles on shahtoosh and Veerappan provoke comment. We decided to excerpt them. But first, the editor's rejoinder 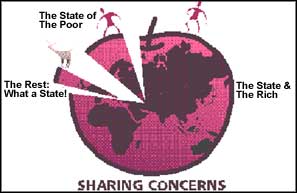 now Maneka Gandhi is angry. And so are many other 'wildlife experts'. Just because recently, I wrote that:

a) shahtoosh should not be banned; b)the chiru (Tibetan antelope) should be bred to produce this high value product ( Down To Earth , August 31, 2000); and

c) to deal with the likes of Veerappan, let local people manage and benefit from sandalwood forests ( Down To Earth , September 15, 2000).

I argued this way for two reasons. One, the Indian government's regulatory danda (stick) rarely works. Two, I have long observed that in India, when people get to manage their natural resources, they usually do a good job.

The Indian government's double-talk is evident. It vehemently opposes linking trade and environment in the World Trade Organisation. (Naturally; such a linkage essentially affects India's rich industrialists!) But equally vehemently, it supports linking trade and environment in the Convention on International Trade in Endangered Species ( cites ). In such fora, we ridiculously end up opposing governments like that of South Africa, which have a viable programme to use elephants for tourism and meat sharing benefits with the local communities, and have visibly increased elephant populations. Why do we do this? Because, the bleeding-heart argument goes, linking trade and environment in cites mainly affects the poor who depend on wildlife products. This from an Indian government, whose track record of banning trade in wildlife products without coming up with any programme to rehabilitate the affected poor people is as horrendous as its policy on big dams.

I wish to comment on a few issues the various critics of my articles raise. Firstly, all those who have commented on my shahtoosh article say that I do not know what I am talking about, that you cannot breed the Tibetan antelope. But where is the evidence for this? They have given none! Wildlife biologists, on the other hand, tell me that antelopes and deer are amongst the easiest wild animals to breed. Reindeer and caribou are widely bred, almost as domesticated animals, across the Arctic region from Scandinavia to Canada in highly ecologically sensitive grasslands, somewhat similar to the Tibetan antelope's habitat. The blackbuck has been successfully bred in usa and when it went extinct in Pakistan, it was brought back from the us for reintroduction. In fact, I remember being stunned when I saw a sign in a Pakistan national park near Karachi, on an enclosure full of blackbucks, that they were gifted by the us . Just across the border, Rajasthan has them by the hordes because of the conservationist Bishnoi community. The barking deer ( muntjac ) has been bred in the uk and has almost become a pest.

Okay, so we do not know how to breed the Tibetan antelope as of today. But what are our dear scientists doing? Let them take up the challenge, ban the trade in the interim but come up with a sustainable long-term solution. Ayurveda is suffering today because a lot of medicinal plants have disappeared in the wild. So should we just ban their collection in the forests, as most forests departments have done, or should we also find ways to cultivate them? The problem is that the Wildlife Institute of India ( wii ) boffins only list the problems in breeding the Tibetan antelope and conclude, therefore, that it cannot be done. Trained as an engineer, I always thought that once the problem is well known, the solution is easy to find. But no, that seems beyond our government scientists.

A question raised is: how, at the border, can we know if the shahtoosh has come from the wild or from breeding stations? This is the standard argument for the Union ministry of environment and forests. Surely, if this is such an important argument then let our scientists find an answer. For the same reason crocodile farms in India are overpopulated but the government does not allow crocodile skins to be exported, unlike many other countries. Rom Whitaker, the snake expert, who also has a crocodile farm, that can bring millions of rupees to poor people, says he can replace every crocodile lost in the wild with ten others. He has done wonderful work in rehabilitating the snake catching Irulas, after the wildlifers got snake skin export banned, without a thought of its effect upon them. The point is, it is easy to be dismissive, to raise problems. May I suggest we search for solutions? It is time to jettison that frame of mind in which the former wii director H S Panwar refuses even to comment on my point that the sandalwood tree should not be nationalised but allowed to be grown by peasants, an argument many other foresters would agree to.

To come back to the shatoosh controversy, equally a wii bogey, this is what a leading Indian wildlife biologist says: "farming or sustained utilisation is not a problem but can be a boon. But the ministry of environment, forest departments and wildlife scientists want to live in the illusion that we Indians are great protectors of wildlife and will not harm any living being. This fake halo is just to cover up the corruption and inefficiency that has ruined India's natural habitat and are now letting it move like a rudderless shop." Indeed, Valmik Thapar will cry over disappearing wildlife but accepts no solution other than guns and more powers to forests officials. Can't we even debate on the range of solutions?

The second point that comes out of the replies is 'trade unionism': that criticising wildlife and forest policies is equivalent to criticising individual foresters and wildlifers. I do not recognise, they say, the valour with which foresters fight timber smugglers and poachers, even at the risk of their lives. And, of course, I do not criticise the incompetent police which made up the Special Task Force set up to nab Veerappan and the makers of big dams who turned his grandfather into an ecological refugee. Finally, of course, everything is so simple: if foresters are corrupt then so are non-governmental organisations ( ngos). As if I was defending the incompetent police, big dam builders or corrupt ngo s. Not to worry that I was talking about our forest policies. Everything else is to blame except us. And give several anecdotal information and say how do you explain that! In any debate, these are standard techniques to attack the opposition. Amazing. I thought I was dealing with a serious issue.

When Veerappan killed his first forester, I had written that the poor man had died in vain because he was defending an indefendable policy. We need policies so that our forester do not have to needlessly die at the hands of poachers and smugglers. The social process behind this alienation or criminalisation is, among other things, the result of policies. Not surprisingly, Madhya Pradesh chief minister Digvijay Singh has said the same thing in his letter to the prime minister in which he has asked for a review of the forest conservation policy. When I raise an issue, Maneka Gandhi, Valmik Thapar and others, say what do I know -- I am just a lay person. I thought I was living in a democracy in which everybody, lay person or otherwise, have a right to raise issues and be listened to with respect. Then why do we allow a lay Maneka Gandhi to frame our social welfare policy? Aren't these facetious arguments made by 'experts' who do not know enough themselves?

The third point is that those who raise such issues are 'foreign agents'. Maneka makes the point in her critique of my shahtoosh article. Knowing that I am a foreign agent, she says she is not surprised that I am raising this issue. Interestingly, this is not the first time Maneka is saying this about me. The first time was when we criticised her position on how methane produced by India's cows and rice fields was destroying the Earth's atmosphere and causing global warming. Later, after we produced a devastating critique of the Western data she was happily quoting, in the form of a paper called Global Warming in an Unequal World , she had to eat crow and tell Western audiences that methane is a 'Western conspiracy'. The methane debate is today a dead debate, thanks to the research that Indian scientists later did. Our book on floods in the sub-Himalayan plains of Bihar, Assam and other states said the increased flood problems had far more to do with the destruction of wetlands, drainage congestion and other ecological changes in the floodplains by corrupt administrations of states like Bihar and Assam than with deforestation in the Himalayas. She, as the Union minister of environment and forests, dismissed our book without an iota of alternative argument. But she inspired articles that we were foreign agents supporting timber smugglers and big dam builders. And now, of course, we are foreign agents showing our true colours by saying that the people of Kashmir And Ladakh should be helped by farming the Tibetan antelope. To her, once again, I can only say, Mrs Gandhi, I don't have to prove my patriotism to you.

I am fortunate to receive all these comments. The Planning Commission took my comments seriously and asked several wildlife 'experts' for their comments. In the case of the article on sandalwood and Veerappan article, it was a forester, P M Raghuveer, who asked others to comment on it. Many thanks to these people. I now know what I am up against when I say such 'stupid' things.