A tale of two interpretations 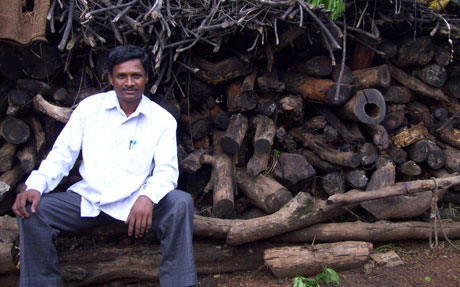 The fresh cool forest breeze and the greenery appears to act as a magic wand on the residents of village Ghati. Middle-aged men and women who just a few minutes ago had been involved in hard-core legal talk suddenly speak like children. Forty-something Gyaneshwar Sahare, who had been pouring forth on the grizly details of hunger strikes and arrests, now frisks around like a kitten. “Look, how many new saplings are there! Look, how the forests revives itself! Why do we need plantations?” he sings rather than talks.

A silent and surly looking woman who had hung in the background at the meeting in the gram sabha building turns up with a wideopen laughing face and a sweet leaf. “Eat it!” she cries. As half-expected, the “sweet” leaf is the most crazily bitter thing you ever tasted. Loud but friendly laughter, a timely bottle of water, and the explanation that the leaf is a very useful medicine in fevers, sooth the jangled nerves. During the long stroll that follows, this scribe is introduced to more than 50 species of trees, bushes and herbs, and their benefits to man and forest lovingly explained. All in all, one can see the people here love their forest.

For more than a year, this tiny village in the Gadchiroli district of Maharashtra, is fighting the forest department for the right to protect its forest. Sometime in mid 2009, the village had applied for community forest rights (CFR) under Forest Rights Act (FRA), inspired by the success in Mendha Lekha. Even as they waited for a title, in December 2009, forest department officials marked a coupe for felling. “They had marked hundreds of good, mature trees of Yein and Dhawda which are traditionally a source of timber, but also yield very valuable gum,” says Roopchand Dakhne, community leader. “We all felt that the trees had a long life left and did not want such a huge number of trees felled.”

The people interceded with the department, demanding that they had not been consulted before marking the coupe, and on December 12, submitted a gram sabha resolution to the effect that the residents did not want the trees felled. Department officials stopped the felling operations, but were back in late March, and this time they felled several hundred trees in the teeth of protests from the gram sabha.

“We were desperate, so we staged a hunger strike on April 27, 2010, demanding that our CFR claim papers be given to us and the felling be stopped. We thought that once we had the claim, we could tell the department to stop felling,” says Dakhne. On May 3, the strike was called off after both demands were ostensibly met. The local forest ranger even gave the gram sabha a written undertaking that no felling will be done in the village forest without the consent of the gram sabha.

But the CFR claim that was given left the village feel cheated because not only had the land area been slashed to half of what had been identified by the village gram sabha, but crucial rights, including ownership and management rights granted by law, had also been denied. (Read Forest Department's cheat act).

“That was a huge blow, but we thought that could be remedied through appeal to the state-level monitoring committee on FRA,” says Dakhne, “So we filed an appeal, and meanwhile, decided to confiscate the timber that had been forcibly and illegally felled by the department.”

Accordingly, when in June 2010, the department sent hired bullock carts belonging to the Jangal Kamgar Sanghatana, a local union of forest labourers, to collect the felled timber, the villagers did not allow them to work. Subsequently, in December 2010 again, villagers captured two tractors of the same union trying to collect the timber, and fined the union Rs 15,000 that the latter paid up. In February 2011, department again sent hired private tractors, and when the villagers captured these, the owners filed a police complaint. After police intervention, the tractors were released, but no action was taken by police against the villagers. Instead, police officials encouraged the department and gram sabha to find an amicable solution.

However, the department again tried to collect the timber, this time with the help of its own official vehicles, in April 2011. Villagers, unable to stop this onslaught, staged another hunger strike between April 13 and 19, demanding that the operation be stopped, following which department gave up. In May,when the department trucks arrived again, residents filed a police complaint and staged a one-day tendu leaf work strike, forcing the department to abandon the move again.

Meanwhile, the village gram sabha had drawn up another resolution, demanding that villagers be given 1,000 measures of fuelwood and 100 measures of timber out of the felled wood for their own needs. The village Joint Forest Management (JFM) committee also demanded the same under the JFM government resolution (JFM GR) of 2003 on April 14, a day after the hunger strike. The Department agreed, but a dispute arose on the mode of disbursal of this material. While the department wanted that the people should procure the required material at nistaar rates, the gram sabha felt that the material was theirs by rights and should be handed over to it for distribution. The Department refused, so the gram sabha issued passes to each family to collect one or two measures of firewood according to requirement, which people did.

This is where the dispute now stands, with both parties refusing to budge, each believing its own standpoint to be the legal one. The points of dispute are interesting.

The Department says villagers have no rights over timber, only MFP. Residents counter that the trees felled are the source of a valuable MFP–edible gum, and department had no right to fell them against people’s consent.

The Department opines that the timber has been felled strictly according to its working plan, so it is perfectly legal and village has no call to interfere either with the felling or the carting. Villagers feel that the department’s felling violates the rights of village level institutions–gram sabha, JFM committee and FRA committee–granted under legislations like PESA, FRA and the JFM GRs. “If that is not true, why has the ranger given a written commitment not to fell without our consent in future?”

J P Quraishi, range forest officer of the Kurkheda range in which Ghati village falls, does not have an answer to this question, since the commitment was given by his predecessor in that post, but he is sure residents of the village are at fault. “They are claiming that they are the owners of the forest according to FRA, but they are wrong. We have not given them the ownership rights,” he asserts.

“Who is the department to give or not give rights granted to us by the constitution?” retorts Dakhne, “Our case is pending before the state committee, and the Department should wait for its judgement before making claims.”

Quraishi is very angry with police inaction against the residents illegal action. “They are afraid ,” he exclaims, “Unless a few of them are arrested and jailed, this village will continue its rogue activity.”

Police sources plead helplessness to act one way or the other because the legal standpoint is unclear. “Both parties appear to have laws supporting their side,” said an official requesting anonymity, “This case has become a problem for us with both sides filing complaints, and we would rather have them resolve it between them.”

Gram sabha has meanwhile, decided to levy fine on the department for felling timber worth Rs two crore (department estimate) from their forest without their consent. “What we resent,” says sarpanch Krishna Kotnake, “Is the way the department will hear nothing against is precious working plan. Is the plan sacrosanct? Do they have the right to throw it in the face of every objection? Has it been granted legal immunity to all the legislations giving rights to the forest communities? If that is so, why make these legislations in the first place?”