Mattewara: Why Punjab needs this ancient forest near its largest city and river

A nilgai in the Mattewara Forest of Punjab

The people of Punjab, environmental activists and various social organisations are protesting the state government’s decision to set up an industrial park near the Mattewara forest.

The decision is wrong from all angles. The forest has historical and religious value. It is located near Punjab’s largest river, the Sutlej and its largest city, Ludhiana and offers valuable ecosystem services to the people of the state. The industrial park would be the death knell for the forest in a state that already has very less forest cover.

It was in July 2020 that the erstwhile Congress government in Punjab approved setting up an industrial park on 955.67 acres near Mattewara forest and the Sutlej river.

However, environmental and social activists staged a peaceful protest in front of the Greater Ludhiana Area Development Authority office following the announcement.

The Punjab government then clarified that the Mattewara Industrial Park would not be set up on forest land, but on land acquired in Sekhowal, Mattewar, Salempur, Garhiyan, Cell Kalan and Kalewal villages, in addition to the land of the animal husbandry and rehabilitation departments.

However, the government’s clarification does not help matters. Let us try to understand why. 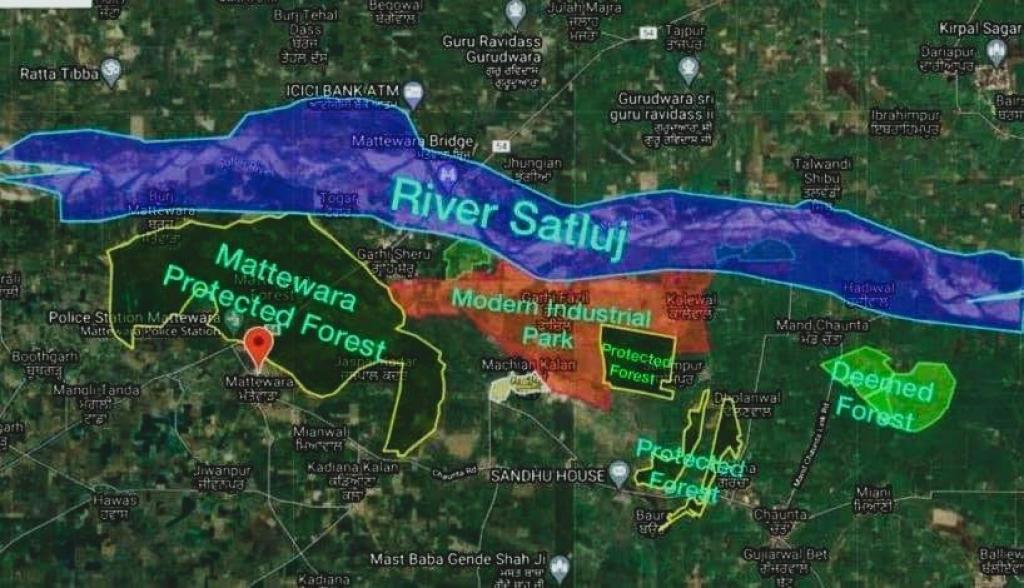 A map of the Mattewara forest near Ludhiana

The Mattewara forest has a special appeal among the Sikh masses of Punjab as it features in Sikh history. Guru Nanak Dev, the founder of Sikhism, had emphasised the importance of the Mattewara forest when he said only it could save Ludhiana from floods.

Guru Gobind Singh escaped into the forest of Mattewara in a wounded condition after the Battle of Chamkaur Sahib in 1704, with Mughal forces in hot pursuit. The forest is the location where the Guru composed Mittar Piare nu haal Mureedan da kehna (Tell the beloved friend the plight of his disciples).

The Mattewara forest protects the city of Ludhiana from floods in the Sutlej and also absorbs the gases emitted from industrial units in the city. It is also a source of oxygen and clean breathing air.

The industrial park near Mattewara forest though, would be an invitation to the death of the jungle.

Dry acid particles settle on the leaves, twigs, flowers and fruits of all types of vegetation in the vicinity of industrial units. Wet acidic deposition in the form of acid rain causes severe damage to vegetation.

Their photosynthesis process and their ability to produce food are reduced. In this way, the industrial park would not only pollute the surrounding environment but also cause severe damage to the Mattewara forest.

The industrial park will not only endanger the existence of the forest but would further pollute the water of the already-polluted Sutlej river.

Industrial units on the banks of rivers usually discharge water contaminated with chemicals directly into them without any treatment. Ludhiana’s Budha Nalla, once a tributary of the Sutlej, has been converted into a sewer by the industrial units of Ludhiana.

A large number of fish died in 2018 due to polluted water released from the Kiri Afgana Sugar Mill into the Beas, another major river of Punjab.

After the Nangal dam, the Sutlej flows through Punjab with a negligible amount of water. However, it is in Punjab’s best interest to save what is left from the clutches of this so-called economic development. 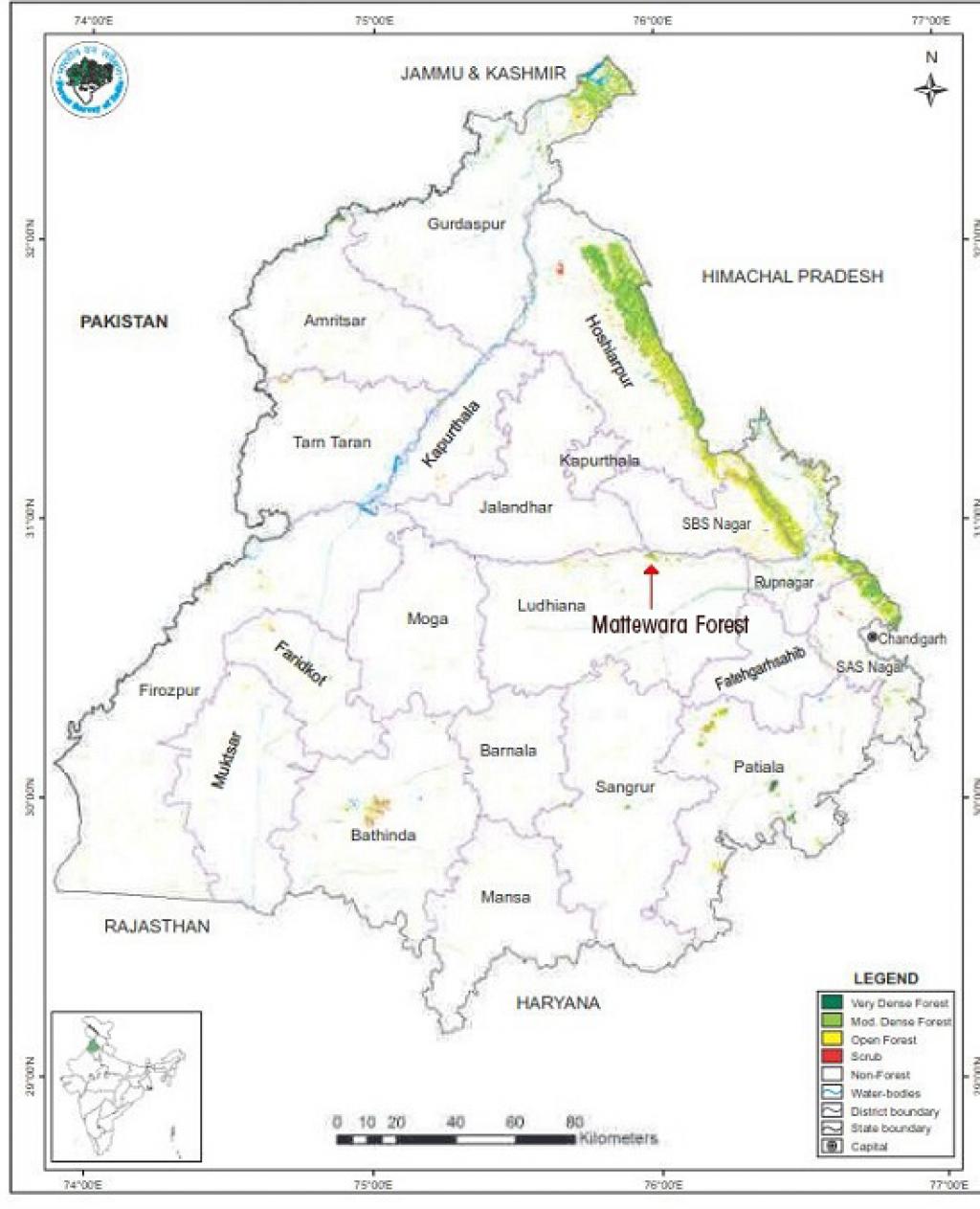 The forest map of Punjab according to The State of India’s Forests 2019, showing the location of Mattewara

According to the 2019 State of India’s Forests, only 3.67 per cent of Punjab’s total area is under forests. This should ideally be 33 per cent.

In order to keep the natural environment in balance, there should be at least 29.33 per cent more forest area in the state. According to the report, Punjab has dense forests on only 0.02 per cent of its land and the remaining 1.59 per cent is moderate forest and 2.06 per cent is open forest.

The forest cover in Punjab is less than that of a desert state like Rajasthan (4.36 per cent). Unfortunately, there is no district in Punjab that meets the requirement of 33 per cent forest cover. Hoshiarpur district has a forest cover of 21.54 per cent, which is higher than all the other districts of Punjab, but it is also lower than the national average.

The Mattewara forest falls in the Ludhiana district where the forest cover is only 1.65 per cent.

There is no room for doubting this report, as a large number of trees have been cut down during the construction of the Bathinda-Zirakpur four-lane road and the Bathinda-Amritsar road.

The Punjab government had cut down thousands of trees while widening the roads in Ludhiana city too, but had promised people that the same number of trees would be planted in the Mattewara forest. This promise has not been fulfilled yet, but there are now plans to indirectly deforest Mattewara.

After the Mattewara forest and the Sutlej, the third important aspect is land. All the villages from which land is supposed to be acquired for this industrial park — Sekhowal, Mattewar, Salempur, Garhiyan, Cell Kalan and Kalewal — are located in the area adjacent to the Sutlej, where the groundwater level is very high and farmers have no problem planting paddy.

However, in more than three-fourths of the community development blocks in Punjab, the groundwater has dropped to dangerous levels. A research study conducted by scholars from Punjab Agricultural University, Ludhiana, has revealed the fact that groundwater in Punjab is likely to be depleted in the next 17 years. If that happens, the terrible consequences would be unspeakable and unbearable.

The entire land of Sekhowal village has been acquired for this industrial park except 100 acres meant for houses and fodder. The people of the village have no livelihood other than farming. No one knows whether the government has any plans for the employment of these people.

The Punjab government should build industrial parks for the economic development of the state but not at the cost of precious natural resources. In this regard, it is important to keep in mind that the main priority for the industrial development of Punjab should be given to the agro-processing industrial units which the people of the villages can start in their homes or on the common lands known as shamlat.

The present Aam Aadmi Party government should immediately cancel the approval given by the previous Punjab government to establish the Mattewara Industrial Park. The time to take action is now because tomorrow might be too late.