Historically, compared to other developing economies, India has had relatively smaller agricultural land-holdings.

Mixed farming and animal tending was the backbone of small and marginal rain-fed agriculture. Diverse food crops along with animal produce ensured relatively balanced nutrition. But policies in independent India reduced diversity while increasing the market dependence of small farms. Small farmers became victims of policies favouring imports, some of which were aimed at either improving international relations or promoting industry. Nevertheless more than 40 per cent of the country’s food products still come from farms that are smaller than two hectares.

The government’s research and development initiatives in agriculture, however, have little for the small farmers.


There are no studies that assess the diminishing dignity of agriculture as an occupation. Policy discussions in the media seem to be rooted in the belief that it is possible and desirable to wean nearly 700 million people from the small farms. Th at this means sprawling slums, impoverished living conditions, water scarcity and social conflicts is rarely discussed.

Today it is common to see members of a farm family migrating to urban conglomerates in search of cash income. Migration does hamper transfer of farming skills over generations. But then what are the off-season employment opportunities for youngsters who stay back in their villages? The widening income disparity between rural and urban areas, along with the risks associated with weather and markets make agriculture an unattractive occupation.

Land reforms in many states have certainly helped the landless and addressed the social objective of distributed land ownership. However, as common lands used by communities also got distributed, small farmers and those who were still landless were deprived of valuable biomass for fodder, fertilizer and fuel. Common lands in rural areas have shrunk due to encroachments, acquisitions or allotments for corporate industrialization and urbanization. Access to credit, even in small amounts to buy seeds or manure, is so low that small farmers often lease out their land to big farmers or industries. In Hunsur taluk of Karnataka, for instance, land is contract ed to tobacco farmers by owners who do not have the money needed to buy seeds. They usually have to ignore that such contracts lead to intensive cultivation which in turn deteriorates the soil, water and biomass base.

Farmers living near the Nagarhole National Park in Karnataka do not even have the option of leasing out their land for contract farming. Farms near the wildlife habitat do not attract contractors, since the risk of crop raids by wildlife is high.

As neither crop insurance schemes nor crop loss compensation schemes are adequately addressed, these farmers have virtually given up on agriculture and instead rely entirely on a few days of labour opportunities.

It is often said that irrigation can reduce farming risks. But most government irrigation schemes are insensitive to local cropping patterns. Most such schemes also do not have place for local people in monitoring impacts. Meanwhile, diminished soil fertility and declining biodiversity take a toll on fodder and fuel wood. 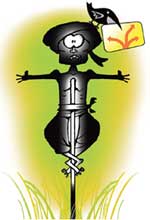 It is often believed decentralization will give people control over local resources. But minerals and other non biological resources—soil for bricks and sand for construction—are extracted at the cost of ecosystem services crucial to sustaining the long-term productivity of small farms. Local government institutions rarely keep the interest of small landowners before sanctioning such land uses.

Lack of non-farm rural employment could be overcome by investment in rural industries tailored to local needs. But successful processing industries for the farm produce are exceptions to the rule and rural tourism has not really taken off in India. The forest department has also taken up silviculture management, reducing livelihood options for fringe farmers.

Seema Purushothaman is with the Ashoka Trust for Research in Ecology and Environment, Bengaluru