Within a week, we will know whether the "No Water No Votes" campaign influenced results

"No Water No Votes", a water-based election boycott campaign, is the result of the scarcity of water and its ramifications that our country is facing. The spectrum of reasons for collectively boycotting elections because of water-related issues is varied and ranges from localised problems to those affecting people at large. This boycott is influenced by the severity of the problem, its priority in the lives of people, inability of the community and civil society to reduce its effects, and what the government does to address the issue.

Water crisis or water-related social, agrarian, health, and environmental issues in India are not hidden from public consciousness. The manner in which community, civil society and government tackle them can be assessed through different studies and reports.

A recent survey by the Association of Democratic Reforms (ADR) pointed out two water-related governance issues featuring in the top ten priorities of voters on an all-India basis. For example, drinking water was third, with a priority rating of 30.5 per cent, and availability of water for agriculture was sixth, with a 26.4 per cent rating (See Graph). 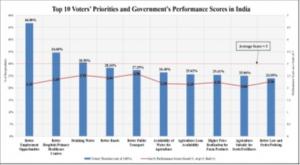 In the list of top thirty voter priorities, five were linked to water and water resource governance issues. The same report has also highlighted how the performance of the government on these issues is perceived by people; the performance was perceived to be "Below Average".

Adding to this, in this election year of 2019, 365 districts in 17 states are under severe drought. Considering such a situation, intellectuals, activists and affected people have decided to democratically express their resentment through the boycott of elections.

The "No Water No Votes” campaign in two assembly constituencies, one each in Madhya Pradesh and Gujarat, was an instance where people had not only practiced this democratic way of protest to boycott the election, but an analysis of the result shows that it had succeeded in sending a clear message to political leaders.

In the Valsad constituency of Gujarat and Jabera of Madhya Pradesh, people had notified the administration during the assembly elections held in 2017 and 2018 respectively, that if the administration failed to resolve the water issue, they would boycott the election. As a consequence of the "No Water No Votes" campaign, either polling percentage declined, along with an increased percentage of NOTA, or people changed their political choice in these constituencies.

During the early phases of the Lok Sabha polls in 2019, a report had noted that around 165 villages from 14 states had decided to boycott polling. The boycott was the last option for these village residents in different parts of the country, borne out of the poignancy of their situation and grievances that have not been addressed since years.

One of the prominent reasons for boycott was the water-related issue. In December 2018, people from 40 villages in the Pauri Garhwal district of Uttarakhand had threatened the administration that they would boycott the upcoming election if water was not provided to them. Similarly, several villages in western Uttar Pradesh's Hathras district, communities from Bihar, Gujarat and Andhra Pradesh decided not to cast their vote unless their demands were met.

"No Water No Votes" is not just restricted to rural areas; there is evidence that urban populations have also taken to it. Around 1200 residents of Undri, near Pune, decided not to vote and put a huge hoarding stating "No Water No Votes". The residents of this society have not been getting regular water supply since 1996, and the long-term predicament forced them to boycott the election.

The problem of water scarcity has not only been reported from drought-prone areas, but also those with an abundance of water or prone to floods. The reason for this paradox lies in the recent history of water governance at the national and international level.

Between 1981-1990, the United Nations, funded by the World Bank, UNICEF, and other international agencies, initiated the first "Water Decade". This programme  forced a shift in focus from surface water to groundwater. Under it, millions of hand pumps were funded and installed in developing countries, including India.

The need of the hour is to reflect upon the approaches to manage water resources as well as the structural changes required in the water sector.

The "No Water No Votes" campaign or election boycott for water in the Gujarat and Madhya Pradesh assembly elections had a clear impact on results. Within a week's time, we will get to see whether the campaign had any impact on the results of the 2019 Lok Sabha elections.

Asrarul Haque Jeelani is a Research Scholar at Centre of Social Medicine and Community Health, JNU