West Bengal polls: What’s in it for Adivasis and forest dwellers?

For political parties, tribal votes matter more than including tribal concerns in their political agenda. 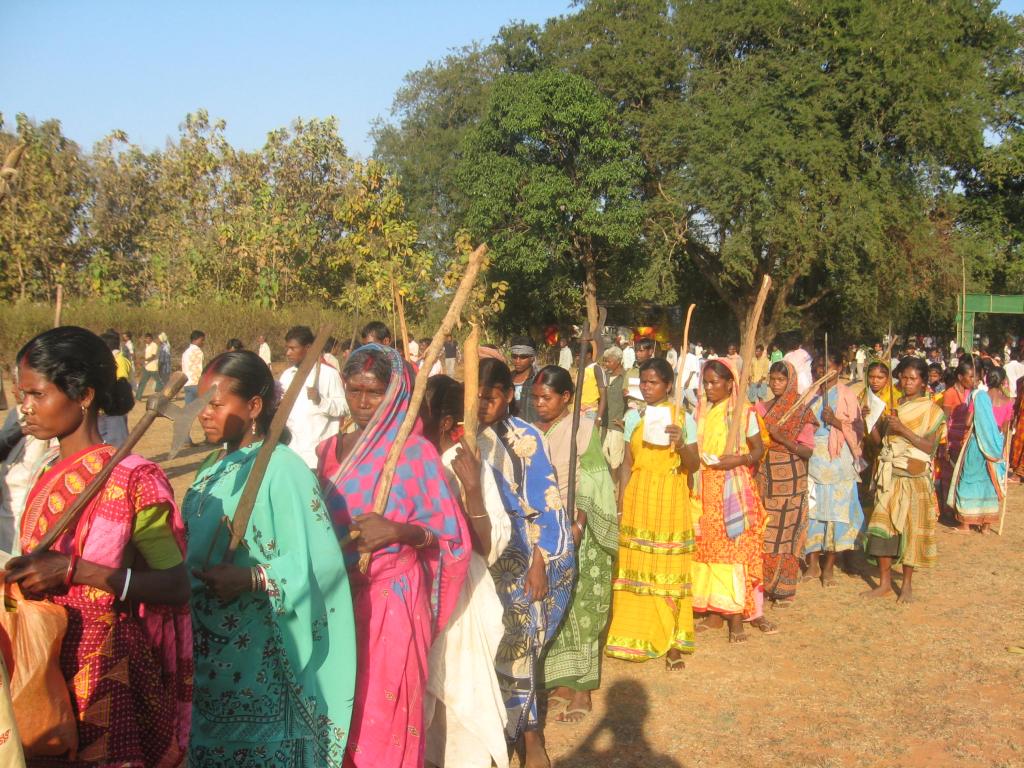 Jaipal Singh Munda, the late tribal leader and member of the Constituent Assembly of India, summed up ‘tribal identity’ in the following words:

I am proud to be a Jungli, that is the name by which we are known in my part of the country. As a jungli, as an Adibasi, I am not expected to understand the legal intricacies….

Sadly, even after more than 70 years of independence, Adivasis and the forest dwelling population of India are not entitled to basic social, political, economic, civil and cultural rights ensured to all citizens of India.

For political parties, tribal votes matter more than including tribal concerns in their political agenda.

It is not surprising that Trinamool Congress and its principal opposition, the Bhartiya Janata Party (BJP), are wooing Adivasis and forest dwellers in West Bengal ahead of elections to the state assembly.

Trinamool, in a rather bold move, co-opted Chhatradhar Mahato, a controversial yet formidable tribal leader from Jangal Mahal, within its rank-and-file last year. Further Trinamool supremo Mamata Banerjee appealed to the central government to officially recognise Sarna Dharma, a popular faith among forest dwellers who worship nature and its elements, as a separate religion.

She has also been quick to offer various job positions to those from scheduled tribes across the state.

Unlike the Trinamool, the BJP has been rather slow in appeasing the tribals of north West Bengal. BJP’s star campaigner, Union home minister Amit Shah, on his recent visit to Bankura deftly announced school projects for tribal children, a university at Jhargram, an irrigation dam in Bankura as well as development of places of worship of the tribals.

Ironically, he even went to the extent of promising implementation of the Forest Rights Act (FRA), 2006. The BJP-led government at the centre has been insistent on diluting this act by floating discussions on amendments to the ignominious Indian Forest Act, 1927. This is like giving with one hand and taking away with the other.

The tribals have also not forgotten how Shah, on his visit to Bankura, misidentified the statute of an indigenous hunter leader as Birsa Munda, the iconic tribal leader of India; garlanded the statue and even tweeted about it.

Such insensitivity and apathy left the tribal people hurt, the state BJP unit red-faced and the party exposed to taunts and massive online trolling. The local tribes felt so humiliated that they sprinkled ganga jal (water from Ganga) on the statue in order to purify it.

No reward for vote bank?

Verrier Elwin, the eminent anthropologist proclaimed about the original inhabitants of India: "They were here first: they should come first in our regard".

However, when it comes to the most urgent issues affecting the life and livelihood concerns of the forest dwellers, the approach of both the BJP and Trinamool has been evasive.

In its response to the Supreme Court Order of February, 2019 that directed state governments to evict millions of forest dwellers, the central government offered weak defense arguments against allegations of wildlife conservationists and a feeble request for a ‘hold’ on the order.

The West Bengal government, too, has remained silent on its plan, including the time frame, to implement review of the rejected claims over pattas (legal land ownership document) of the forest dwellers.

Spread over 890,000 hectares, West Bengal has 120,000 hectares of recorded forest land. Around 5.2 million voters in Bengal are eligible for forest rights, 3.5 million of them being tribals, according to Census 2011.

The number of community rights claims received until December was 10,119, out of which only 686 have been distributed over 572.03 acres of forest land recent December 2020, according to a report released by the Union Ministry of Tribal Affairs.

While individual claims guarantee right to ownership, community claims ensure livelihood and sustenance of the community of forest dwellers who manage, sell and conserve produce from forests or community forest resources like honey, bamboo and tendu leaves.

It is widely believed that wherever FRA has been implemented successfully and claims have been granted following due process of law, remarkable achievements have been observed. This is true for Gadchiroli, Gondia, Amravati in Maharashtra, Narmada in Gujarat, Rajnandgaon in Chhattisgarh, Mayurbhanj, Kandhmal in Odisha, among others.

Despite such success stories, inaction by both state and central governments has systematically aggravated obstacles for forest dwellers.

Forest dwellers in West Bengal allege that on more than two occasions, the state government bypassed the authority of Gram Sabhas, a mandatory requirement under FRA, and authorised construction of power projects on fertile sacred forest land.

Adding to the woes, the central government has given a free hand to the forest department officials — against whose very authority FRA, 2006 was enacted — to grab, evict and displace forest dwellers as and when necessary.

Such measures do not just undermine and undercut FRA, along with the Panchayats (Extension to Scheduled Areas) Act, 1996, but even threaten the environment and biodiversity thriving in these forests, naturally unsuitable for monoculture plantations.

Elwin, in summarising the maladies of the tribesmen in India said:

First and foremost is the loss of land…all rights over the forests where they once freely roamed, and many of them today are landless coolies.

Evidently, for Trinamool and BJP, adivasis and forest dwellers are mere ‘vote-inducing cash cows’. Amit Shah is worthy of an applause for promising implementation of FRA in the tribal belt.

He, however, should not forget that Jaipal Singh’s forest-dwelling brethren may not be expected to understand legal intricacies but they sure do understand how it is to live ‘overlooked’.