The persistent racial stereotype of blacks not having intelligence has often had tragic consequences. It is time to end it

“There is hardly any difference between blacks and donkeys.” Many moons ago, when I had started my career in the office of a national daily in Gujarat, I heard these words being spoken by none other than the bureau chief.

This was much before Somnath Bharti, Khirki Extension and Yannick Nihangaza had happened. The bureau chief’s remarks should not shock anyone. People in India should ask themselves, Jesus-like, have anyone of us not sinned, the sin here being holding racist stereotypes about black Africans?

It is not that the people of South Asia are alone in holding such prejudices. They have been seen in East and Southeast Asia and the Arab world too.

There is a reason as to why such thoughts still continue to hold sway despite so many of us stressing that ‘we are not racists’, especially when it comes to black people.

It is the seed planted in different cultures, especially the western one that has dominated the globe for the past 500 years that says that black Africans lack intelligence, wisdom, subtlety, nuance and most importantly, culture.

There is a whole body of works that are today known and discredited as ‘race science’ that was successful in propagating the vilest ideas about race, particularly about black Africans.

For instance, Christoph Meiners, a German philosopher in the 18th century, claimed that “the skull of the Negro was larger but the brain of the Negro was smaller than any other race.” The statement of the bureau chief makes sense now?

Here is Thomas Jefferson, one of the founding fathers of the United States on the cerebral inferiorities of the black race:

“I advance it therefore as a suspicion only, that the blacks, whether originally a distinct race, or made distinct by time and circumstances, are inferior to the whites in the endowments both of body and mind.”

This same gent, Jefferson, himself a wealthy planter, later went on to have several children with his slave, Sally Hemmings.

The most insidious of insinuations made by white thinkers was the comparison of the black race with primates, one which has stood the test of time. Here is French naturalist Georges Cuvier:

“The projection of the lower parts of the face, and the thick lips, evidently approximate it to the monkey tribe: the hordes of which it consists have always remained in the most complete state of barbarism.”

The monkey slurs ring so true with so many of us in India who have subjected African and African-origin students and tourists to ‘primate insults.’

The blacks-do-not-have-intelligence stereotype has been so persistent that in at least one example, it has even denied black people their due role as builders of civilisation.

I am talking about Great Zimbabwe, the magnificent stone metropolis that stands in the midst of wooded Savannah in south east Zimbabwe, near the town of Masvingo.

Rumours about a great stone palace in the heart of southern Africa, reached Europe in the Middle Ages, ostensibly carried by the Portuguese who were present in nearby Mozambique. Indeed, it was a Portuguese sea captain named Vicente Pegado who first saw the site in 1531, as history now tells us.

The city was built with an architectural finesse and craftsmanship that has never been seen in Africa or any other location. Huge granite slabs stacked neatly on top of one another without any mortar, cement or any other binding agent to bind them. It is something hard to believe.

Historians and archaeologists have dated Great Zimbabwe as existing between the 11th and 14th centuries CE. The Kingdom of Zimbabwe, of which the city was the headquarters, was a thriving state in southern Africa that traded in gold, ivory, copper and tin with the Swahili city states like Sofala and Kilwa.

Artifacts found in the stone ruins have been traced to Persia and even China, indicating that Great Zimbabwe was an active participant of the Indian Ocean trade network. The state lorded over a number of other smaller states, or ‘Little Zimbabwes’ from which it extracted tribute. 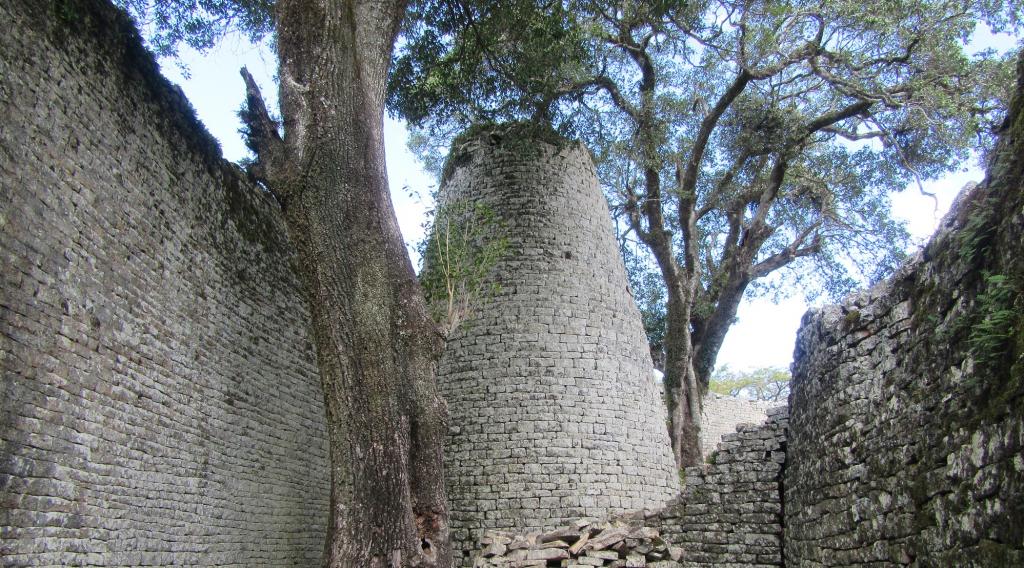 A conical tower arises amid the ruins of Great Zimbabwe. Photo: Flickr

Its magnificence made it hard for white explorers, visitors and colonialists to believe that black Africans or Bantu peoples had built it.

The city was first ‘discovered’ by a German explorer, Karl Mauch in the late 19th century. He promptly declared the ruins had some connection with the Biblical Queen of Sheba or that a white civilization had built them.

Modern Zimbabwe was then under the control of British imperialist (and racist) Cecil Rhodes’ British South Africa Company. Rhodes tried very hard to prove that Great Zimbabwe was not built by black people.

One of the people he sent to explore the ruins, a journalist by the name of Richard Nicklin Hall, succeeded in destroying a large part of the site, guided by his belief that he was removing the “filth and decadence of the Kaffir [ie African] occupation”.

It fell on other white people to prove that Great Zimbabwe had indeed been made by African hands (and with African brains). These include David Randall-MacIver and Gertrude Caton-Thompson.

However, both, the British Colony of Southern Rhodesia as well as the unrecognised state of Rhodesia refused to accept these findings. They even censored archaeologists who claimed the site was African-made. Some, like well-known archaeologist Peter Garlake, had to leave the country because of this.

Great Zimbabwe is an example of how the notion of blacks lacking intelligence nearly destroyed a piece of human heritage.

What does it teach us? Attributes ranging from physical strength to intelligence to wisdom are not the preserve of any single human race. The concept of race itself has been disowned by latest scientific research. The bottom line is: we are all human and are one. Remember this the next time you stare at a black man or equate him with a beast of burden.