Green rupee in a mess 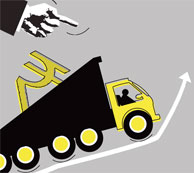 The rupee has crashed, growth is down and there is panic that the India story may be over or, at least, seriously dented. For most commentators, the underlying reason for the decline is green regulations. They think environmentalists are squarely to blame.

This argument is only partially true. It misunderstands what many environmentalists have been asking for and it presupposes that green regulations actually work. It also downplays the mismanagement of resources and the complete breakdown of the regulatory system that has led to the present crisis.

Take the example of mining. It is said that India’s iron and steel industry is bleeding because of bans, first in Karnataka and now in Goa. It is also said that coal is being imported because we cannot get permissions to mine in the forests of central India. And of course, it is said that huge investments made in bauxite refinery of Vedanta will now go waste because of 12 illiterate villages. In short, it is the environment that has brought India down.

The fact is that India does need to mine minerals, even though they are found underneath its most precious forests and the homes of its poorest people. The question is: how will it regulate the mines to ensure that damage is mitigated; that mining does not destroy ecologically sensitive areas and watersheds; and that it has the consent of the people? In 2008 my colleagues had raised these concerns. The impact of mining on the environment was huge. Our research showed that the key issue was the utter lack of capacity of mining regulators to oversee the industry and to push towards resolution of the problems. It was not mining but the oversight of regulated mining and rules for inclusive growth that were at the root of the problem.

Based on this research we made presentations before different government committees. We argued that this sector was out of control and rapacious. It needed to be reformed so that the country could mine sustainably. But the government and the industry paid little heed to our argument.

Everyone wanted to mine as if there was no tomorrow. And they did. In Bellary and Goa, large tracts of land were brought under mining. We reported on the illegality of mines, the absence of roads for transportation and how companies did not pay royalty to governments. It was loot.

When it went too far and became too obvious, something had to be done. The courts stepped in. First in Bellary, where till then the all-powerful Reddy brothers ruled the roost, terrorising anyone who dared come in the way. The action was a reaction: close down all mines. A few years later this happened in Goa as well, where competitive populism ruled. The present chief minister was in the opposition then. Illegal mining was his election plank. The report of the Shah Committee, set up by the Union government, came at an opportune time. Then the court ordered closure of all mines.

But this is not to say that the closure is permanent or that these steps end up fixing things for the better. In Bellary, all mines have either been reopened or are in the process of reopening. The Central Empowered Committee of the Supreme Court was asked to examine the cases and advise the court. It classified mines in three categories—no major encroachment of forestland; some encroachment (up to 10-15 per cent of the mine lease area) and encroachment on more than 10-15 per cent of the mine lease area. It asked for mining plans from the first category and allowed it to function; the next was told to pay a penalty, prepare a plan and then opened, and only the third category mines have yet to open and there are proposals to cancel lease. By April 2013, of the 166 mines closed down 108 had started operations again.

All this would have made sense had the institutions now responsible for managing and regulating operations been made stronger and more accountable. But that is not the case. So, there is no reason to believe that the mine reclamation and rehabilitation plan will be put to use this time. There is no reason to believe that mining will not once again become as destructive and as rapacious as before.

In Goa, the story is set to repeat. There are three central players—the state government, the Union Ministry of Environment and Forests and the Supreme Court’s committee— who are vying for kudos for closing and opening the mines. In all this, there is no understanding of how to demarcate the boundary of a national park or protected area so as to ensure that mining is kept out of these high biodiversity zones. It’s getting messy. Tempers are rising. In all this, Goan iron ore mines will be reopened. One cannot have a blanket ban on mining. Nor can one argue that there should be no mining in Goa because “it is in my backyard” but it should be allowed in Chhattisgarh where the poor and the powerless live. But will the reopening of mines take into account environmental safeguards and bring local benefits?

Let’s discuss this next fortnight.

Report of Justice M.B. Shah Commission of inquiry for illegal mining of iron ore and manganese

Report (Final) of the CEC regarding the mining leases surveyed by the joint team in districts Bellary, Chitradurga and Tumkur and related issues