The state has number of exotic vegetables, available only in the local markets

It is often assumed that people in the north-eastern states eat only non- vegetarian food. But then assumptions about the culture and cuisine of people in the Northeast is more often than not proved wrong. Just as a meal in a home in the region is considered incomplete without a piece or two of meat of choice, it is equally incomplete without vegetables.

At a recent meeting with a young chef from Shillong, Lambert Chiang, currently a junior sous chef at Sheraton New Delhi, I was introduced to many exotic vegetables like the tree tomato and a variety of mustard leaves that I had not heard about. Chiang who hails from Shillong is passionate about the greens that are locally available in his home state. One third of Meghalaya is under forest cover. Its subtropical forests are considered among the richest botanical habitats of Asia, and it is only natural that one finds a host of exotic edible greens here.

I have spent a number of years in Shillong as a school student and have seen these greens in the local vegetable market. I have also understood the food habits of the people of Meghalaya in particular and I am aware of their love for all the greens that accompany their meal. Members of the Khasi tribe, for instance, will invariably include a soup called syrwa (made from a mix of vegetables; sometimes a chunk of meat is added for flavour). The Garos may love their wak pura (pork curry with mustard leaves) but again, not without mustard leaves. The Jaintias love their pork, but again not without a touch of sesame seeds or some greens.

Today, a lot of people in Meghalaya are health conscious and they deliberately cut down consumption of red meat and increase their intake of greens. A Khasi friend, for instance, told me her family’s intake of meat could be a mere 100 gm per day. All they do is mix a piece of meat in their dish just to enhance the flavour.

But in the interiors of Meghalaya, like in Nongshken, which is approximately 24 km from Shillong, people anyway do not have access to meat on a daily basis. Reason: economy, of course. Meat is expensive and village residents can ill afford it. The only day they loosen their purse strings for meat is on a day called market day, which could fall on any day of the week. On most days of the week, they make do with vegetarian dishes.

My visits to Shillong are always rounded off with a mandatory trip to the bustling local market called Bara Bazaar (a big local wholesale market that has everything from betel nuts to vegetables). This is the place where all types of greens are available and it’s a visual feast to see the vast display. From fresh bamboo shoots, to yam of all shapes and sizes, to wild mushrooms, to a variety of mustard leaves, you find them all. 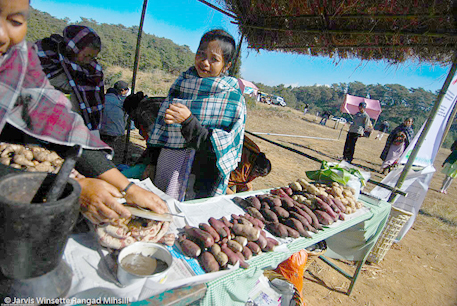 There could easily be more than three types of potatoes. In village homes, boiled and peeled potatoes are mashed and consumed with a little salt, which is wholesome and filling. 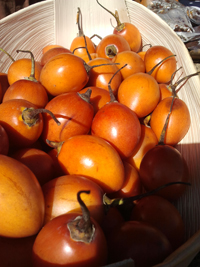 One also finds a variety of tomatoes, including what Chiang calls a tree tomato. This grows on a seven feet tall plant and is mainly used for chutney or Tung tap—the tomatoes are skewered and roasted over a fire to get a smoke flavour. They are garnished with chopped coriander leaves and sprinkled with a little salt. One can also find cherry tomatoes, sweeter than what you normally get in Delhi’s INA market. The baby green tomatoes are usually used as souring agent during cooking.

The demand for banana flowers, treated as a delicacy, is also high. The purple-red flower is first boiled in water after which the inner tender parts are removed. They are then chopped into pieces and mixed with white sesame seeds, roasted and pounded. Sesame seeds, by the way, are commonly used in dishes. A trip to the market early in the morning is always rewarding; one gets to buy the best produce. Some vegetables come all the way from neighbouring states like Assam. Most of the vegetables, though, are directly sourced from local farmers. The variety of fruits in the market is another eye-opener.

I now understand why a prominent chef friend from Delhi, Sabysachi Gorai, who runs the city's most well-known Japanese and Mediterranean restaurants, sources most of his ingredients from Shillong. His supply of black berries, passion fruits, black mushrooms, flat bamboo leaves and even sticky rice come from Meghalaya. 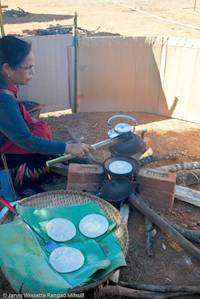 Cuisine-wise too, Meghalaya has a lot of offer. In 2010, the first ever food festival was organized in Mawphlang, a small village near Shillong. The festival was organized by William Boy’s Home, an orphanage in Shillong, in association with the Rome-based Indigenous Partnership for Agrobiodiversity and Food Sovereignty to coincide with the visit of the founder of the Slow Food Movement, Carlos Pertini. The I remember having met Pertini on his return from Shillong and he could not stop praising the local food he sampled. By the second festival last year, it became clear that the food festival had to be an annual feature. It was held on December 10 to celebrate the International Terra Madre (Mother Earth) Day and since then the second Mawphlang Festival is being called the Mei-Ramew festival, a Khasi equivalent of Mother Earth Festival.

Needless to say, last year’s festival turned out to be an interesting mix of indigenous cooking from the tribes of Garo, Jaintia and the Khasis. Villagers brought together different dishes cooked by them. Last year, Chiang enthralled the visitors by giving a modern touch to the dishes prepared by the village residents. He also tried his hand at innovative dishes, using ingredients like millets. His version of corn rice is worth trying. This is essentially made of short grain rice cooked with corn kernels and water. The procedure is simple: soak the rice in water for ten minutes; take the corn kernels and boil for 15 minutes and blend it roughly and keep aside. The corn is added to the rice and cooked in water. You can have this with any vegetable of your choice. And, it does taste better than plain rice.