By G U Kurup 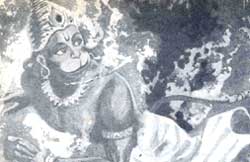 Gods, it is said, can assume any shape or many shapes at one time. Our mythological Hanuman, monkey god of the epic Ramayan, conforms to this omniscience. A combination of the rhesus monkey, the langur and man, it cannot be said to belong to any single species.

I find this kind of synergy is common for portrayals of mythological characters which are usually portrayed as composite formalised mosaics of two or more beings. Their actual features are embellished or overlaid by ascribed attributes drawn from characters which are either similar or familiar. The traditional depiction of Hanuman is in keeping with this.

The question that strikes me concerning Hanuman is: why this mix-up from two simian species? Obviously, the most striking or appealing features from different species have been taken -- the highly arching tail of the langur, the pinkish face with the more pronounced and powerful muzzle of the bandar and the stance of a human being; the features of only one species were inadequate to portray such a valiant character as Hanuman.

He seems to have the head and face of the rhesus macaque (Macaca mulatta) because of the lack of a mane and crown tuft and a pink face. The similarity does not end here. Hanuman also has a prominent, prognathous (protruding or long-jawed) muzzle and hair along the side of the jaws like sideburns. These are in sharp contrast to langurs which are maned and darker, with flatter features.

Artists have evidently found it difficult to draw Hanuman. The upright stance of the monkey god is quite contrary to the natural horizontal stance of both the species from which it has drawn its characteristics. This also explains why the northern form of the langur's tail carriage has never been depicted.

It looks to me that the artists would have had an easier time, and could have done a better job, had they not been required to combine these three different strains. For example, in the typical monkey stance, the tail could have been easily drawn with an artistic flourish, looping either gracefully forward or backward.

Imagine translating the forward loop in the context of the upright human stance -- the appendage would have to be drawn arched over the head or shoulders and would dip awkwardly in front of the monkey god's face. This kind of an illustration would look very odd and could be made aesthetically appealing only with great difficulty. The ancient artists, therefore, consciously or not, ignored the direction of the loop that, even if natural, might offend artistic sensibilities.

I see a moral in all this and that is that both artists and nature favour features that are fittest!

G U Kurup works with the Western Ghat regional station of the Zoological Survey of India in Calicut.