The North will stagnate, South will grow, and the multinationals, aided by World Bank ideologues, will exploit the poorer countries for their own survival 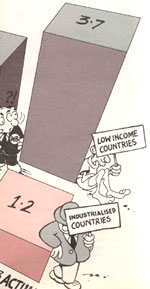 THE World Bank (WE) has made a strong plea for concerted action by the governments of the rich and poor countries alike, to "reverse the long-run trend of widening international inequality." In its World Development Report, 1995, it has argued that the rich countries must preserve open trade relations and control their fiscal deficits. This would lead to high growth rates in the rich countries, and maintain global demands as well. It has said, "Globalisation of capital is likely to usher in mutually beneficial capital flows."

In other words, the Bank has tried to demonstrate that the interests of the rich and poor countries are convergent. The data presented in the report, however, indicates that the rich countries are caught in a'no go'situation. Technology has set the limits to their growth and, hence, the scenario for the rich countries is quite dismal. In fact, the Bank is projecting a convergence of interests only as a strategy towards establishing the control of the Western multinationals upon the world's economy.

The major threat towards the achievement of this objective comes, surprisingly, not from the poor countries but from "a small but vocal minority" within the industrial countries, "who fear they will lose from the movement of capital and people across boundaries." The report, therefore, seeks to establish, despite all data to the contrary, that the workers of the rich countries stand to gain from the current phase of globalisation. The fallacies in the Bank's approach can best be appreciated by taking a look at what it had recommended a decade earlier in its 1985 report.

At that time, too, the Bank had made much the same recommendations for the rich countries as it has done now. It had said that reduction in deficits, reduced rigidities in the labour markets and reduced protectionism against imports from developing countries would enable the rich countries to maintain income growth rates as high as 3.7 per cent per year. The Bank had given 'high' and 'low' case projections. The 'high' case, was expected to take place if the rich countries followed the Bank's recommendations, while the 'low' case was expected to take place if it was otherwise.

It is clear from the above figures that the rich countries had been expected to grow at a minimum rate of 2 per cent per year but they managed to achieve only a 1.2 per cent growth rate. On the other hand, the developing countries had been expected to grow on the higher side, at the rate of 3.4 per cent, but there the achievement was in fact 3.7 per cent. Clearly, therefore, while the rich countries could not even achieve their 'low' case scenario, the poorer countries exceeded their 'high' case scenario!
The WB had proclaimed in 1985 that the "policies of industrial countries largely determine the external climate for the developing countries." Obviously, that has not happened. The Bank had further said that "policies in industrial and develol countries will determine whether the developing countries achieve steady growth." In retrospect, it seems that the FO countries may not be so dependent on their richer cou after all.

Why have the Bank's projections failed so miserably order to appreciate the reasons it is necessary to take a short walk through history. The basic question is whether to nology can grow in a continuous upward trajectory or there long periods of technological stability, somewhat plateau. The major technological innovations of the Age - copper and bronze smelting, wheeled carts, sad brick and stone buildings and ideographic signs- bar taken place early, may be within the first 500 years or so of the third millennia before Christ. Then, for nearly 2,000 years there was Like by way advancement of technology.

Towards the begining of the Iron Age, largely in Greece And India, major developments took place in iron smelting And metal-working, shipbuilding and waterworks. In the DernaL -Me major contribution of the Roman " of mechanical toys and the architecture of the Ibm once again followed a period of another iotachnologicall stability. The plateau was broken both the invention of the gunpowder by the Mongols. Only in the modern tiams, perhaps, starting with the steam engine, technological advance once again took off in earnest."

Wheather such plateaus we inherent to the development of technology and industry or not is an open question. But we can gain some ind&ts into the present economic develop ullsing them from this standpoint. If the advanced r aftbe developed countries cannot update itself amirecommic: consequences follow. First, profits plaulliteii. into the construction of new industries. 0 saturation of production capacities in the rich ind so a fall in the rates of profits there. This is the alp investinent that we observe today. The returns kiligiloar in the poor countries, because there are no new emerging opportunities in the developed countries.

Second as noted in the WB'S 1995 report, "technological change appears to be increasingly labour-saving." But that does not seem to have happened with my of the recent steps forward in ethnological development. Which means that the unemployment situation gets progressively worse in the richer countries.

The International Labour Organization has noted this in its Report on World Employment, 1995: "Between 1974 and 1985, unemployment grew markedly in the countries of the European Community. 1990-94 nullified all the improvements during the preceding period; in 1994, unemployment returned to 1985 levels." The 1995 report of the wB also notes that the hours worked per person in the richer countries had declined from 52 per week in 1900, to 31 in 1986. This is another indicator that fresh opportunities of employment generation are not arising.

Third, businesspersons are not able to achieve competitiveness by the adoption of new technologies. As a result, they are seeking investments in other countries, offering cheaper resources and labour to retain their competitiveness. This too is the logic of foreign investment. The consequence is that new jobs are actually being created in the developing countries. The Report on World Employment thus laments, "Five million of the 8 million jobs created by the multinationals between 1985 and 1992 were in the developing world."


The result will inescapably be that there will be a decline in the growth of the rich countries. It can be asserted that some of the developments in world economy appear to be consistent with such a prognosis. At the same time, the poor countries may continue to grow, irrespective of the policies followed by the rich countries. That is precisely what has hap- pened in the last decade, notwithstanding the wa's projections to the contrary.

The multinationals see opportunities arising mainly in the poorer countries. They see their operations within their own countries becoming increasingly complicated, with the greatest threat to their interests coming not from the poor countries but from the labour of the rich countries themselves. it is for this reason that the WB, as their spokesorgan, tries to assure the rich countries, especially their labour, that they have much to gain from globalisation. Again, it is for this same reason that the wB harps upon the great beneficial impact of foreign investments, although it accounts for barely 11 per cent of the investments in the poorer countries. It is essential for the multinationals to continue to have access to the resources and labour of the poor countries in their drive for the control of the world economy.

The game plan is simple. The multinationals have to relocate their facilities from the rich countries, where opportunities are limited, to the greener pastures of the poorer countries. For this purpose they have to keep the labour in their own countries quiet by promising growth by globalisation. O This 'no go' situation has to be kept under wraps. Cook rR Simultaneously, they have to pry open the economics of the poorer countries for their entry. Actually, there is no synergy between the rich and the poor countries. The latter will grow, no matter what the rich countries do. The rich countries will stagnate, no matter what anyone does. The game is the control of the economics of the poor countries. That is the real battle that is being fought today.