Have we forgotten Rio already? 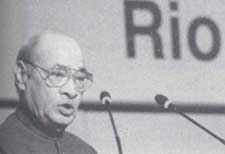 THE EARTH summiteers who assembled at Rio in June this year have gone back to their respective countries. The hard preparatory work, the almost endless discussions to reach a consensus and the excitement of an earth summit are all over. One talks of a lull before a storm; but there is also lethargy after an event. If such lethargy and complacency set in, the fruits of all this effort can be set to nought.

I remember that happening after the 1979 UN Conference on Science and Technology for Development. This is something that the follow-up institutional mechanism must guard against.

In June 1972, the UN Conference on Human Environment was held in Stockholm. Environment was a relatively novel topic then. The conference brought out the differing viewpoints of industrialised and developing countries on the issue. Industrialised countries were largely concerned about pollution and the increase in toxic substances. The developing countries insisted that the primary sources of their environmental problems were poverty and underdevelopment.

Despite the clear difference in perceptions, the conference arrived at a historic declaration that established the basis for a new era of international environmental cooperation. Environment was established in the public eye and the links between environment and development were recognised for the first time.

In 20 years, from Stockholm to Rio, there have been significant developments. The World Commission on Environment and Development in its 1987 report, called Our Common Future, forcefully argued the case for sustainable development. The Rio conference was the UN General Assembly's response to the Brundtland report.

Expectations from Rio were clearly high and necessarily so. Many were unrealistic because they assumed that Rio would signal a sudden change to a brave, new, unified world. Clearly, egoism and group interests were still too strong and international solidarity still too weak for this to happen.

To fulfil the expectations of some tangible results from Rio, there were a number of outputs -- the climate convention, the bio-diversity convention, the non-legally binding statement on forest principles, Agenda 21 and the Rio declaration. Each of these represented a major international exercise in consensus-building.

The Rio declaration consists of 27 principles that define the elements of sustainable development. Agenda 21 defines priority action for the 21st century over a wide range of environmental issues and covers resource use aspects. A key cross-sectoral area that has been given considerable attention is 'science for sustainable development'.

Whereas the shortcomings of the Rio conference are obvious, it created a unique opportunity for ferment among the nations. The public awareness it has created cannot easily be stilled. Rio has strengthened the undeniable links between environment and development.

India may indeed argue that, from its viewpoint, the successes were a reassertion of the right to development; an appreciation of unambiguous national sovereignty over national resources; an understanding that socio-economic development and poverty alleviation are the first and over-riding priorities of the developing world; and the need for a substantial increase in financial assistance from the North to the South. This is all to the good -- but not enough.

In my view, India has failed in the basic work that it needed to do even without going to Rio, namely, to define the pathway of sustainable development for itself.

Our entire approach to development is imitative of the North's past policies. But India's future pathway of sustainable development cannot lie in this imitation.

There is a need for a transport policy with emphasis on public rather than private transport; for an energy policy that immediately makes the maximum use of natural gas and gives priority to non-conventional energy sources; and for an industrial policy that provides for value-added, decentralised production. Water cannot be regarded the way we are dealing with it today: we have already seen what riparian disputes can turn into. Have we got any policy on any of these issues? The answer is a clear, loud, "No".

We cannot have sustainable development by neglecting vast sections of our population who do not have education and health facilities. We need to give the highest priority to human development, mere lip service is not enough.

The ministry of environment and forests is not meant to deal with small problems like pollution. It must deal with the basic issues and causes. Its primary function should be to bring about sustainable development. This calls for a shift from regulative function to promotive functions like system analysis, policy formulation, awareness creation and promotion of new technology.

The transition to sustainability requires a more effective use of resources and a more severe accountability for the environmental and economic impact of their use. There is also a need to provide necessary incentives to change, rather than relying overly on regulatory measures.

We must recognise that the development model that has produced the lifestyles of the industrialised countries and that is imitated and enjoyed by a privileged few in our country, is simply not sustainable. The issue of a development model needs a much greater debate, which, I am afraid, is totally missing. On the road ahead from Rio, I find nothing being done nationally that impresses or enthuses me.

In July 1989, a steering group set up by the Planning Commission (PC) had submitted a report on environment, forests and wastelands development for the Eighth Plan. Despite my repeated recommendations and requests to successive governments, this report (and a similar one on science and technology prepared during my chairpersonship of the commission) has not been made public. There are no secrets in these documents. So much for freedom of information and open society.

The 1989 PC report dealt with sustainable development, ecological and livelihood security and climate change. It recommended that a cabinet committee be formed on sustainable development with the Prime Minister as chairperson and similar committees in the states with chief ministers heading them. This has not happened. We seem to believe that only the so-called political and economic affairs are important, not sustainable development, and science and technology. I cannot see real progress without a change in this attitude.

---M G K Menon was scientific adviser to three prime ministers. Now he is a member of the Rajya Sabha and president of the International Council for Scientific Unions.