it is near impossible for slum dwellers to practice WHO guidelines of social distancing, frequent hand-washing

The novel coronavirus disease (COVID-19) is spreading like wildfire in Dharavi — Asia’s largest slum — located in Maharashtra capital Mumbai, with 833 positive cases as of May 9, 2020, confirming the worst fears of explosive contagion in India’s slums.

In India, 5.41 per cent of the total population and 17.37 per cent of the urban population live in slum areas. Overcrowded, highly dense slum and squatter settlements of cities — inhabited by people on the lower rungs of the economic ladder — highlights the challenges of countries’ control over the pandemic.

While living within congested, over-crowded housing and shared basic amenities in such areas of the cities, it is near impossible or meaningless for slum dwellers to practice the World Health Organization (WHO) guidelines of social distancing, frequent hand-washing with soap and water and other hygiene to combat the virus (SARS-CoV-2).

Its spread in Dharavi certainly raised the question of the country’s preparedness for an epidemic like this. The nature of the distress due to the direct impact of the crisis would be the highest among those living in these areas.

A gist of vulnerabilities of housing and basic amenities of people in slums and squatter settlement in India can be gleaned from the Union government’s latest National Sample Survey Office (NSSO) data on Housing and Sanitation in 2018.

The data reveals that the ratio of a room to person in urban slum and squatter settlements is 1:1.41, which means more than one individual shares one room. This figure, however, varies in different states.

In West Bengal, one room is shared by more than two individuals. In states like Maharashtra, Uttar Pradesh, Delhi, Gujarat and Assam, the ratios is higher than in other parts of India. This indicates the near impossibility of social distancing and quarantine in urban slums of the country.

Ratio of room to person in slums and squatter settlement

Emergencies include visiting hospitals, getting medicine and essential food items for the middle- and upper-income population, while following social distancing norms.

For people living in slums and squatter settlements, however, daily unavoidable functions, when they have to come out of their homes, also includes using common sanitation facilities and collecting water to drink and other purposes.

More than 50 per cent households collect drinking water from common sources, including common use of households in the building, a public or private source restricted or unrestricted to particular communities.

Among these, 25.63 per cent of households collect water from unrestricted, public sources. Therefore, to get drinking water, household members have to come out of their homes, where distancing as well as other non-contamination to the virus, is questionable. 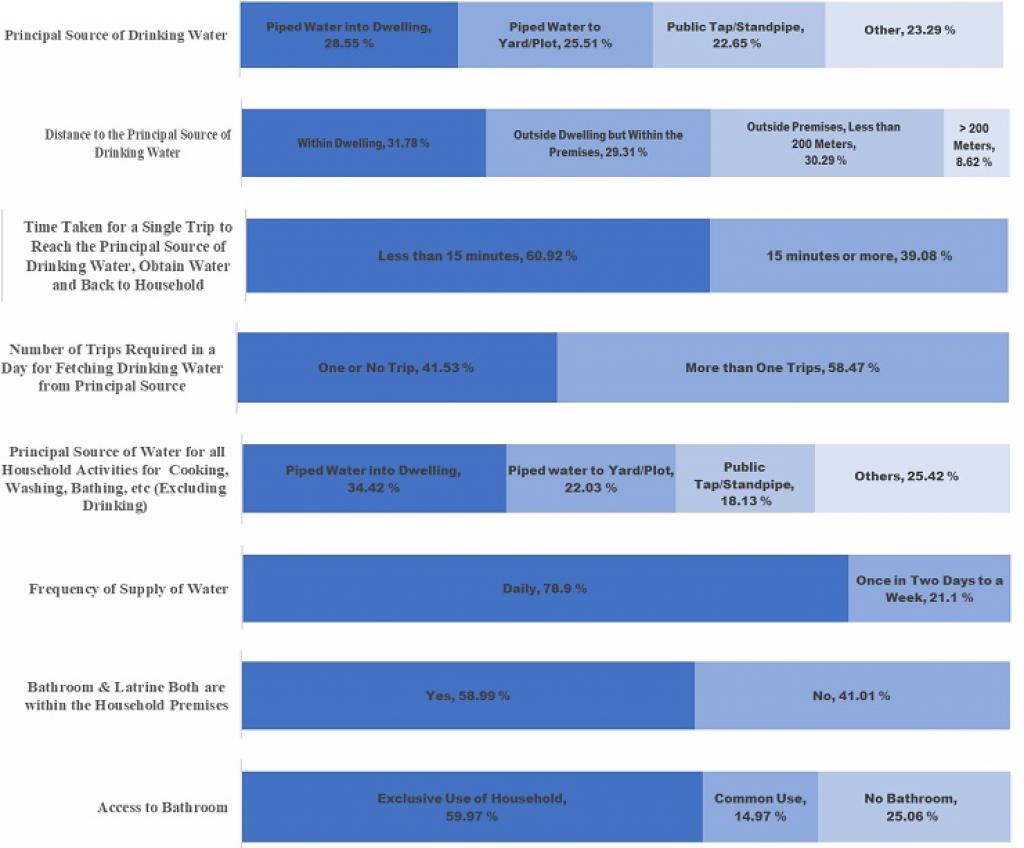 Water used for other purposes, excluding drinking, also demonstrates the vulnerabilities of slum and squatter settlements in India. Nearly 18 per cent of slum households use public tap or standpipe for these purposes.

Another advisory of the WHO for reducing the spread of the disease is frequent hand-washing with soap and water. Only 53 per cent of slum and squatter households, however, wash their hands with water before having their meals and almost 17 per cent use only water to wash hands after defecation.

Possibilities of health and hygiene among slums and squatter households

Additionally, 27 per cent of the slum and squatter settlement households reported availability of water, but not soap / detergent in and around the bathroom.

Possibilities of health and hygiene among slums and squatter households

Similarly, in case of disposal of garbage, 33.13 per cent of households are estimated to use a common place (excluding community dumping spot) which includes open areas, streets or open drains.

Again, 21 per cent of slum and squatter settlement households are estimated to have no arrangement of collection of garbage of the households by any agency.

These numbers clearly demonstrate the unpreparedness of slums and squatter settlements to face any pandemic of this intensity or even less.

These realities are common in other countries too: Slums of Orangi town in Karachi, Payatas in Manila, Nairobi, Sao Paulo are only a few examples.

In 2014-16 too, the Ebola epidemic impacted the densely populated urban slums of Liberia, Guinea and Sierra Leone. However, increasing urbanisation and other developmental activities overshadowed the critical issue of quality of life in slums. This results in the rapid spread the virus within the circumstances of a pandemic like this.

In search of cheaper shelter in costly cities, households only concentrate on their livelihood and other essential needs, but overlook health risks associated.

Another highlight from the analysis is that although WHO norms for COVID-19 appear very obvious and painless, it is extremely difficult to implement in slums and squatter settlements in cities. In case of slums in India, these are luxuries which everyone cannot afford.

The opinions expressed in this publication are those of the authors. They do not reflect the opinions or views of any institution