In America today, the revolutionary question is not how to get food to eat -- it's what and how much 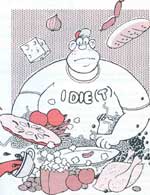 LIVING in the US, as I have been for nearly 6 months now, is like attending a crash course in nutrition. In the poorer world, the key issue is how to get enough food to eat. Here, in the rich world, people are worried about what they should eat to live long and be disease-free.

For a long time now, people have known that heart diseases have a strong relationship with diet. Now, scientific studies are showing that cancer does, too. The prestigious National Cancer Institute of the US government has claimed that nearly a third of the cancer cases in USA are probably the result of a bad diet, which essentially full of fat and devoid of vitamins.

This year, the USA became the first country to require manufacturers of all packaged foods to provide customers with a nutrition label by law. The label has been so designed that it helps a consumer know what proportion of the daily recommended intake of fat, calories, vitamins, etc, a single serving of that particular food item would constitute. I have not seen any reports on how useful consumers find these labels.

But the constant barrage of information is bound to make people increasingly conscious of good nutrition. A magazine article recently claimed that a high priority research item for agricultural genetic engineers is to develop a potato which does not absorb too much fat when being deep fried so that a low-fat version of potato chips, a high favourite among commercial snack foods, and French fries, can be marketed.

The well-known consumer activist, Ralph Nader, has also sponsored a NGO which has come to be known as "The Food Police". Over the past few years, this group has published reports on Chinese, Italian and Mexican food sold in restaurants and popcorn sold in movie theatres. Some results have been stunning and have led to changed practices. Contrary to what most Americans believed, popcorn was found to be very high in fat and sodium. The oils used in making the popcorn have now changed. A recent report in The New York Times claimed that American pizzas are also very unhealthy.

The media prominently displays such stories. The feedback I found most interesting were those which pointed out that these criticisms can only be levelled at the Mexican dishes and pizzas sold in American restaurants but not at the traditional cuisines of Mexico and Italy, which are quite wholesome and balanced. American restaurants sell a highly Americanised version to suit the American palate.


I have no idea of how cuisines and diets emerged in different societies. But I guess it must be the result of people's constant exploration for food sources in their environment and, subsequently, of making changes and adjustments with experience. And, in the process, nutritionally balanced diets and cuisines slowly emerged.

For instance, those Indians who did not partake of animal protein learnt to emphasize vegetable proteins in their food. In many cultures -- as in India -- many food items came to be used as medicines to deal with various common ailments. Called "grandmother's remedies" in almost all ancient cultures ranging from Europe to Asia, they have been largely based on local foods.

Years ago, scientists trying to fight cholera discovered the technique of oral rehydration, which was hailed as a major scientific achievement. During an episode of cholera, which is otherwise a self-limiting disease, it is important to keep the patient rehydrated. But as the human gut does not absorb water well when affected by the cholera germ, the main treatment -- until oral rehydration was discovered -- was intravenous rehydration and replacement of salts.

This, however, necessitated hospitals and nurses, not easily available in epidemic conditions. Oral rehydration, on the other hand, can be provided almost anywhere, and indeed helped to save hundreds of thousands in refugee camps before the liberation of Bangladesh. Scientists discovered, through high-tech research, that the cholera-affected gut retains the capability to absorb glucose molecules and, thus, when water is given together with glucose, water gets absorbed. In several parts of India, mothers have traditionally treated children with diarrhoea by feeding them rice gruel. This home remedy, which can now be understood in scientific terms, works on the same principle as oral rehydration. The starch in the rice gruel gets converted in the stomach to sugar and functions exactly like the scientifically designed oral rehydration solution.

American society does not have a culture that is very old and, therefore, I guess, much dietary experience. And long before popular experience could result in a well-rounded diet, it was hit by the power of science and technology which brought with it, on the one hand, industrially processed foods with all their stress on commerce, popular tastes and chemical preservatives; and, on the other, exposure to cuisines from around the world, which in the world of commercial restaurants were readily distorted to suit local, popular tastes rather than nutritional needs.

I am convinced that scientific research on diet and health will grow. Particularly intriguing for me is the kind of diet that is now being recommended in the US. The food pyramid being promoted by the National Institutes of Health as the ideal diet looks very much like the Indian vegetarian diet. Jean Aggarwala, American wife of a friend who works at the United Nations in New York, says that she is stunned by the changes that have taken place in dietary concepts since she sat as a child at her parents' dinner table.

Forty years ago, eggs were big. Now, even one egg a week is considered more than enough because of its high cholesterol content; and the poultry industry has to advertise to promote the sales of its product. In those days, she says, animal protein, especially red meats, were also big. Now they are supposed to be avoided as much as possible and white meats like chicken and fish are to be preferred. Drink as much milk as you can was another refrain then. Now dairy products are not supposed to be as good because of their high fat content. Today's nutritionists strongly emphasize grains (which the American diet never emphasised), vegetables, beans and fruits. The American Cancer Society has a lovely poster showing various fruits and vegetables and their role in cancer prevention.

The country's mega-industry, of course, sees a great commercial opportunity in all this to sell the vitamins and minerals that are available in fruits and vegetables in the form of pills. But the medical establishment is, at least, currently arguing that taking pills doesn't make any difference to cancer incidence. The nutritional elements that are essential for good body functioning should be directly obtained from fruits and "veggies" in the daily diet.


Unfortunately, in the class-ridden society of the US, all this is acquiring a class character. A recent survey showed that despite the increase in nutritional information and awareness, the proportion of medically obese Americans in l990 was more than in l980. The country's black population suffers from a higher incidence of obesity. Fruits, veggies and wholesome diets are more for lilywhite Americans. All this may be related to lifestyles and perspectives. Nutritionists say, for instance, that those who watch TV tend to eat a lot of junk, high fat snacks at the same time. And Americans do watch a lot of TV.

Maybe there is a message in this for cultures like that of India, where TV is beginning to grow rapidly. What will happen to the diets of middle class, satellite-TV addicted populations across Asia? Will Indians, too, munch a lot of high-fat, high sodium potato chips while watching the gyrations of Madhuri Dixit and Amir Khan?