How Adivasis of one Jharkhand village are trying to preserve ethnomedicine

With ‘civilisation’ and ‘modernity’ having made inroads into India’s tribal areas, its heritage of traditional tribal systems of medicine is increasingly under threat 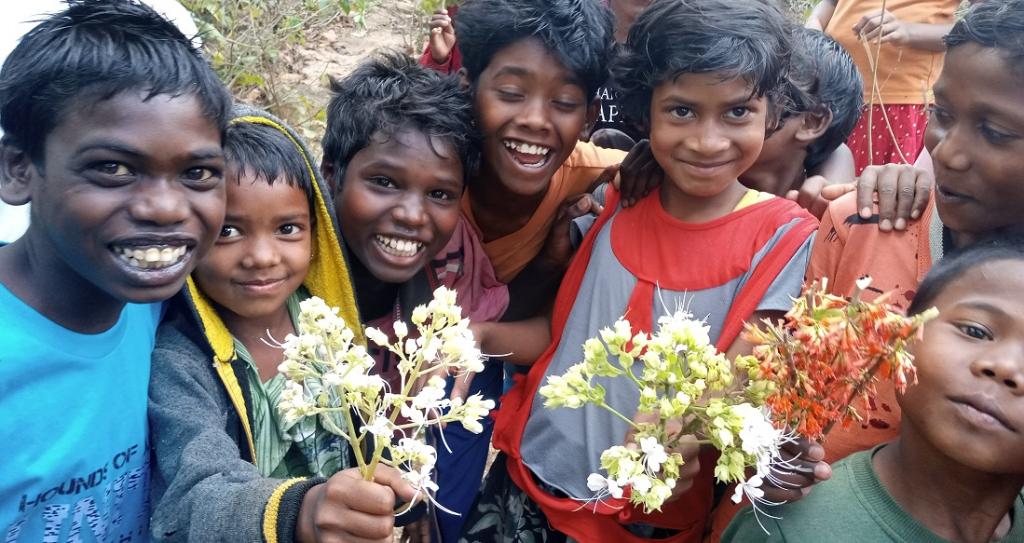 The children of Jana village in Jharkhand, with medicinal plants in their hands. Photo: Author provided

Jana village is located in the Gumla district of Jharkhand. More than 90 per cent of its population is Adivasi or tribal. As such, most aspects of life here reflect Adivasi  cultural and social mores.

The old residents of the village recollect that their ancestors settled in the village centuries back. Earlier, they were mostly dependent on local resources for their life and livelihood.

However, with time, modern amenities started reaching Jana. It didn’t remain isolated from the new scientific and industrial developments — be it in agriculture, healthcare or lifestyle.

Though the villagers still remember their traditional practices in agriculture to some extent, the ancestral knowledge of ethnomedicine has now been limited to only a handful of elderly people.

‘Ethnomedicine’, as defined by George Foster and Barbara Anderson in their 1978 essay Medical Anthropology, is the totality of health, knowledge, values, beliefs, skills and practices of members of a society, including all the clinical and non-clinical activities that relate to their health needs.

According to an estimate of the World Health Organization, approximately 88 per cent of people in developing countries rely chiefly on traditional medicines, mostly plant extracts, for their primary health care needs. However, like Jana, the knowledge of ethnomedicine and the natural ingredients, the plants and animals, is disappearing quickly throughout the world.

In ethnomedicine practices, which mostly evolved in hunter-gatherer societies, ailments are seen as problematic changes that take place in the members of the group.

Horacio Fabrega, in his article The Need for an Ethnomedical Science, argued that ethnomedicine is based on the principle that human beings are both  physiological and cultural beings.

This is the basic difference between it and modern allopathic medicine where human beings are only considered as physiological beings (except probably psychiatric diseases). As a result, the diseases had been classified differently in both these systems.

Ethnomedicine mostly used behavioural changes to diagnose. Further, cure of the disease also involved, in most of the cases, an entire village or a group of people. However, with the influence of allopathic medicine, ethnomedicine also started identifying diseases with the same name as modern medical science.

Ethnomedical practices of the Oraon tribe in Latehar documented by Raphael Ranjit Marandi and S John Britto in their article Ethnomedicinal Plants used by the Oraon Tribals of Latehar district of Jharkhand, India shows names such as typhoid, diabetes, etc, that are no doubt an effort to adjust to the mainstream understanding of diseases.

One aspect of ethnomedicine is that it is a group-based practice starting from diagnosis to treatment. The ailments are defined by change in social behaviour of the member of a group.

A group of people gather the materials needed for the cure and prepare concoctions / decoctions and the treatment involves an elaborate process where a group of people, if not the entire village, participate and the main healer takes their help in the healing process. 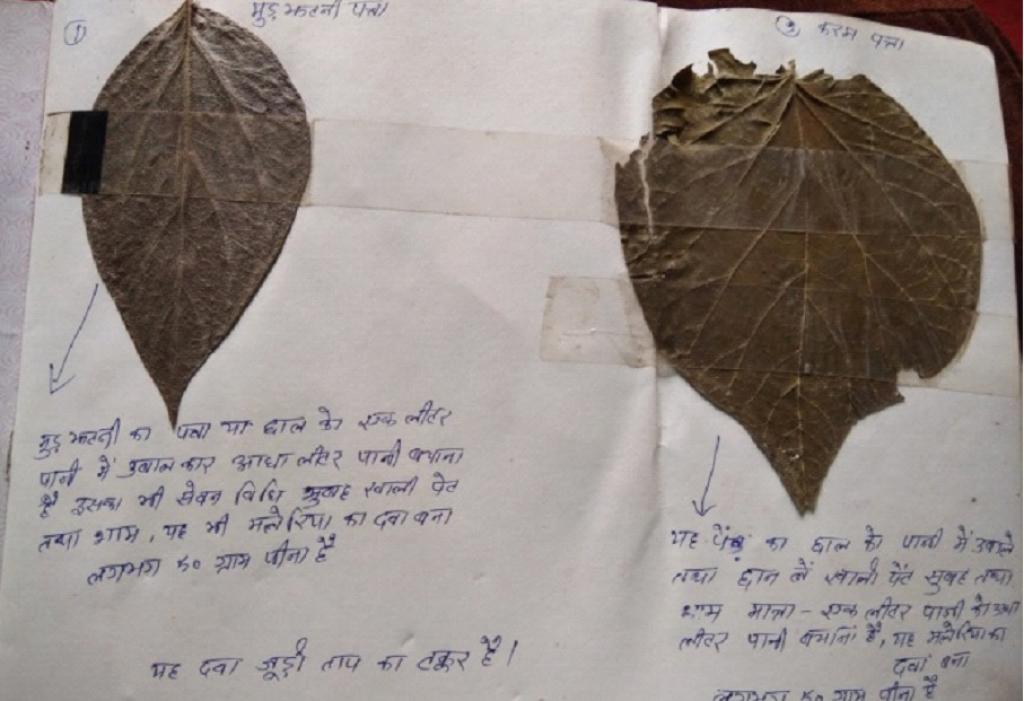 How the Adivasis of Jana in Jharkhand are trying to document the knowledge of ethnomedicine. This figure shows the leaves of 'Murjhatni' and 'Karam' and how they should be used to treat common illnesses. Photo: Author provided

The other aspect is that it is based on practice of indigenous religion in which nature is worshipped. This kind of devotion and loyalty to natural objects is termed by John Wright as ‘geopiety’ in his book Human nature in Geography.

A particular place or tree is considered sacred; for example, the Oraon tribes worship a place around a Shorea robusta tree (Sal) or Nauclea parvifolia (Karam) tree.

Forests have been the major source of raw materials for ethnomedicine. However, ancient ethnomedicine practices had been largely affected after the forests went into the hands of forest departments.

Timber became a significant source of revenue for the state. Anything other than timber species started becoming considered as weeds. Many medicinal plants became weeds as a result of that. At the same time, massive deforestation continued for decades for mining, agriculture, industry, construction, etc.

However, like the extinction of plant and animal species, the practitioners of ethnomedicine appear to be at a greater risk of extinction than even forests and other biomes. Knowledge of the use of plants and other species is disappearing faster than those species themselves.

Loss of indigenous knowledge also has a significant impact on the development of modern medicine. Charles Anyinam, in his article Ecology and Ethnomedicine, wrote that folklore over the years had proved to be an invaluable guide in the present day screening of drugs.

Many important modern drugs (such as digitoxin, reserpine, tubocurarine, ephedrine, to name a few) have been discovered by following leads from folklore.

As NR Farnsworth, in his article The Role of Ethnopharmacology in Drug Development, points out, about 74 per cent of the 121 biological active plant-derived compounds currently in use worldwide, have been discovered through follow-up research to verify the authenticity of information concerning the folk or ethnomedical uses of the plants.

For centuries, healers and indigenous people have been collecting medicines from local plants and animals without creating any imbalance in the population dynamics of the species because of the low level of harvest.

Commoditisation of plant medicine and animal parts was an insignificant aspect of the practice of ethnomedicine. In the last few decades, however, there has been a marked increase in the sale of herbal remedies.

This led to large-scale harvesting of medicinal plants, factory-like production of herbal drugs, and animal poaching in many parts of developing countries. In our country, Patanjali Ayurved was able to declare its annual turnover of 2016–17 to be an estimated Rs 10,216 crore ($1.4 billion) within a decade of its inception. This is destroying the population balance of the medicinal plant and animal species to a great extent.

Jana is a village located on the fringes of a forest and the villagers consider the jungle as part of their life. Earlier, they were dependent on this forest for biomass to use on their agricultural land and for food, fodder as well as fuel.

However, gradually, with modern amenities, these dependencies are getting reduced. An elderly villager, Mahadev Oraon, around 65-70 years, shared that the people of Jana had a rich knowledge of the forest, which was also a source of medicine for them. He added that there were many people in the village who had knowledge about healing, using plants or animal parts from forests.

However, the ethnomedicine practices in Jana has also undergone many changes. Currently, most locals prefer allopathic medicines. They also mostly use allopathic names while mentioning diseases. The entire practice of ethnomedicine, on the other hand, has become dependent only on the healer rather than a group of people.

The community, especially local women, expressed the need for documenting the knowledge of ethnomedical practices for future generations. They feared that all this knowledge from their ancestors would disappear with their generation.

The villagers have documented 29 different types of concoction and decoction preparation methods using various parts of around fifty plants. The residents of Jana also still depend on ethnomedicines for treating their livestock.

*For some species we could not yet identify the botanical name

Acknowledgement: The authors are grateful to Soumik Banerjee and Bibhubanta Barad for their help in identifying botanical names of some unfamiliar species

Temba Oraon is a resident of Jana village. The other three co-authors are members of PRADAN, a civil society organisation