"Hello, there are leftovers"

The environmental costs of development projected by a World Bank study may be staggering, but a lot has been left unaccounted for 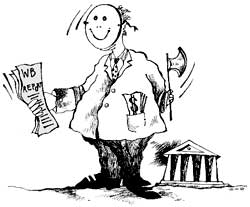 the World Bank (wb) study -- The Cost of Inaction: Valuing the Economy-Wide Cost of Environmental Degradation in India -- (reviewed in Down To Earth (dte), Vol 5, No 10), has been an eye-opener. What strikes one the most is the staggering annual environmental cost of us $9.715 billion being borne by the nation, which amounts to about 4.53 per cent of the gross domestic product (gdp). However, the dte review covered both the counted and not-counted aspects of the environmental impact of development in India. Not only are there certain estimates missing from the wb report -- such as the pollution caused by hazardous industrial wastes, the loss of biodiversity, non-timber forest produce (ntfp), coastal and marine resources -- but it also clearly admits that conservative approaches have been used for the calculation of the costs, so as not to overstate the costs of degradation. The document therefore misleads its readers.

In my opinion, the study very carefully covers all those aspects of environmental degradation that are extremely relevant from a Western perspective. For instance, the health effects of air and water pollution, the decline in tourism, deforestation from the point of view of timber and the drop in agricultural productivity due to soil erosion have been accounted for. One would have liked to see the perspectives of a developing country being taken into consideration. Estimates of the loss in ntfp and the subsequent threat to life as well as the massive erosion of coastal and marine resources due to factors like cyclones and rise in sea levels should ideally have been covered.

The most realistic and representative estimates arrived at by the report are those of the effects of soil degradation and loss of carrying capacity of land due to degeneration of grazing lands. By calculating the decline in productivity due to the former, an average loss of four-6.3 per cent per year, in agricultural output has been arrived at. Per hectare, the annual loss amounts to about us $10-16! One wonders how the vast majority of marginal and small farmers would be able to bear such a cost. The fact that the carrying capacity of our rangelands is 15 per cent of the livestock population, carries a very important message for both livestock planning and grassland management.

On the other hand, the study's estimates of air pollution in Indian cities for 1992 seem to be grossly undervalued. The magnitude of certain environmental costs unaccounted for is presented herewith. Let me begin with the cost of water pollution due to production processes. According to a study by the Institute of Economic Growth (ieg), carried out in 1993, the cost of water pollution abatement per kilolitre of 'treated water for use' is as high as Rs 27.93 for the agro-fertiliser industry and a low Re 1 for the vanaspati (a hydrogenated vegetable oil used in India) industry. The cost of treated and released water would be still higher. It is beyond one to imagine the total cost of water pollution abatement at an all-India level, when the total volume of water used by industrial units is estimated to be around 16 million cubic metres.

The wb study assumes the average annual cost of afforestation (from the timber perspective) to be about us $75 per ha under the replacement cost approach (which estimates the cost of generating a forest equal to the area deforested) and us $100 per ha under the market value approach (which calculates the market value of a sustainable forest yield). Alternative estimates for afforestation are us $177.88 per ha in India and us $1,074 as an average for 34 tropical countries in the world. The gross underestimation is obvious.

An assessment of the cost of abating industrial waste is certainly difficult to make, as stated by the wb study. A number of attempts are on at present to arrive at a sector-wise estimate. A study by the ieg puts the annual cost of collecting and recycling urban waste to be Rs 27 per tonne or Rs 4 per capita. For a densely populated country like India, these costs could constitute a huge chunk of the gdp, given the massive volume of urban waste generated in the country.

The wb study has made a valuable contribution in terms of methodology. Methods involving the opportunity, replacement and user-cost approaches have been used. However, for calculating the health and mortality costs, the paper makes an implicit assumption that the ratio of the gdp per capita in the us and India are as good as the ratio of value on life in the us and India. Such assumptions are unfortunate since human capital and income are not directly comparable. The ultimate lesson to be derived from the wb study is the call for some action 'now', rather than just pondering over the cost of inaction.