A short time ago, a friend requested help in sorting out the fundamentals of setting up a solar photovoltaic, or PV system, for his household energy needs. My first reaction was: “Too expensive, long payback period.” But my friend was insistent, and after a while the idea started appealing to me too. After all, solar energy is in the news almost every day. I started off with some basic research on where solar energy stands in India today.

Apparently, every day the sun provides the earth 6,000 times the world’s current electricity use. Places blessed with sunshine for a major part of the year would have an enormous pool of solar energy to tap from. India receives an estimated 5,000 trillion kWh of energy per year, with most parts receiving 4- 7 kWh per sq m per day. I found out that this amount of energy can, theoretically, satisfy the country’s energy requirement as per 2004-2005 figures.

The trick is in harnessing solar energy through suitable infrastructure and working out the economics so that solar energy can compete with conventional coalderived electricity. However, by all accounts, the David of solar energy appears to be competing with the Goliath of coal-based energy. An Indian household pays Rs 1.5-4 per kWh for conventional energy (excluding off-peak hours). The costs become prohibitive with solar: Rs 15-18 per unit. The odds seem to be stacked against solar energy uptake.

But the Jawaharlal Nehru National Solar Mission would have us believe that is not the case. The objective of the mission is to create conditions, through rapid scale-up of capacity and technological innovation, to drive down costs. The mission intends grid parity by 2022, but “recognises that this cost trajectory will depend upon the scale of ... technology development and transfer.” The goal of this mammoth solar energy mission is to produce 20,000 MW of power from the sun by 2022.

The programme seeks to add 150 MW capacity in the first year of its mission. It has evolved a mechanism to fund this expensive power. The power trading company, NTPC Vidyut Vyapar Nigam Ltd, will buy solar energy from companies and bundle it with cheaper coal-fired electricity from its parent NTPC Ltd. The bundled power will then be sold to distribution companies. The Solar Mission believes this arrangement will assure the project of buyers. 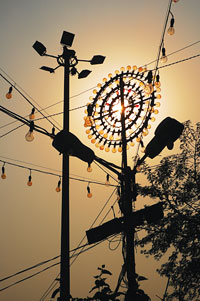 But there are problems already. Applications from solar power companies have far exceeded the 150 MW cap acity. So, solar power developers are going to be selected based on the “discount” they will offer. Economists and other experts rightly fear this approach could see bigger players underbid, which in turn would lead to unviable projects.

There is also talk of feed-in tariffs (FITs) coming into play, whereby the government offers the producer of solar energy a guaranteed purchase for electricity generated from solar energy sources within long-term contracts— 15-25 years. The system has been a runaway success in not-so-sunny Germany, backed by what experts term the world’s most effective policy framework at accelerating deployment of renewable energy technologies.

In Germany where land is at a premium, solar panels mounted on rooftops, warehouses and soccer stadiums have been transforming the country’s primary energy mix. While such systems are dispersed across the country, they are all connected to the national grid.

Utility companies are required to pay even the smallest of producers a premium for the renewable energy their system adds to the grid. Germany’s approach has inspired technological innovation in the solar photovoltaic industry. In early 2009, the German research institute Fraunhofer ISE set a world record for developing PV systems that can convert 41.1 per cent of the solar energy it receives into electricity. The photovoltaic system has not yet been commercialised.

Solar energy appears to be a winning proposition, provided we make the right moves. It will be interesting to see how India’s Solar Mission meets this challenge. And hopefully, my friend and I will be able to install that solar system we are so keen on.