After initial doubts over whether the turtles would retain Orissa as the site of their annual nesting exercise, the reptiles return for the second consecutive year 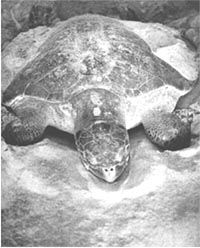 the end of the millennium meeting of turtle biologists in South Padre Island, Texas, usa , took stock of the status of sea turtles and found that all seven species are still surviving. However, what did dampen the spirits was the news that the mass nesting of Kemp's Ridley turtles in Rancho Nuevo, Mexico; had been reduced to just a few hundreds. The biologists expressed the fear that unless proper care is taken to protect the remaining arribadas (literally meaning the arrival and Spanish for mass nesting) at present restricted to the Pacific or Olive Ridleys in Costa Rica, Mexico and India; it may soon become a thing of the past.

India enjoys a unique position in the world as there are three beaches in Orissa where Olive Ridleys congregate for their annual mass nesting ritual. This includes the Gahirmatha beach which has been hosting the largest arribadas in the world till 1996. The state has been in the news for the lack of arribadas during two consecutive years - 1997 and 1998 - besides heavy mortality of the turtles off the Orissa coast. The meeting also devoted a special session to discuss the problem.

While the high mortality of the turtles is of great concern, India has a commendable record as far as conservation of turtles is concerned. This was amply demonstrated by the return of the arribadas to Orissa in 1999 and this year.

Up to the early 1970s our knowledge of the sea turtles that visited the coasts of India was limited. However, the endangered status of the turtles led to a spurt of activities and, therefore, we have considerable data on their activities. Unfortunately, our knowledge of the habits, migratory routes and other activities of both the hatchlings and the adults after they leave the coast, remains negligible.

Altogether five species representing each of the five genera are found in the Indian seas. These are the leatherback ( Dermochelys coreacea ), the green ( Chelonia mydas ), the hawksbill ( Eretmochelys imbricata ), the loggerhead ( Caretta caretta ) and the Olive Ridley ( Lepidochelys olivacea ). They have been found along the eastern and western coasts, as well as neighbouring islands of the Indian Ocean.

A number of protective measures has resulted in good mass nesting from 1990 to 1996 with a record 600,000 in Nasi island in Gahirmatha in 1994 (which was surpassed this year). Then after two bad years - 1997 and 1998 - when there was no mass nesting; 1999 saw the return of the Olive Ridleys for mass nesting. On this occasion, however, they picked a new beach Pentha, located at the southern end of the Gahirmatha sanctuary followed by a larger arribadas at their favourite Nasi island in Gahirmatha. Altogether the nesting in March (in Pentha and Gahirmatha) and April (Pentha) saw the return of over 250,000 turtles. The nesting was unique as it continued through the day and into the night. Previously, they nested only at night.

This year a record breaking number of turtles of over 7,00,000 nested in Gahirmatha over a 12-day period starting from March 12. The turtles nested in Nasi and the neighbouring islands, including the sand pits in Gahirmatha.

At the moment, the threat to the turtles include fishing by trawlers and gill netters in coastal waters, lighting from industries, ports and coastal development activities besides beach erosion, damage by predators and disturbances by local people. It is hoped that the fisheries department will actively implement their own regulations restricting mechanised fishing activities in shallow waters which are meant to safeguard the interests of the traditional fisherfolk and in the process contribute to the protection of turtles. Installation of Turtle Extruder Devices ( ted ) in trawlers in all turtle-sensitive maritime states is necessary to reduce the trawler-related deaths.

The author is vice-chairman of the National Committee for Conservation of Marine Turtles .