How climate ready are we? 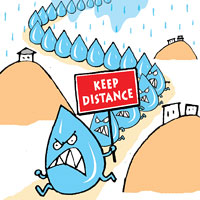 On a brief visit to Pakistan this week I noted that the recent floods have left deep impressions on the country’s policy and political leadership. They spoke about the scale of devastation, human suffering and the massive challenge of rehabilitation. They also noted, interestingly, that in their view there was a link to climate change.

The world can shape the debate on climate link in two ways. One, it can argue endlessly about the scientific veracity of the link between human-induced climate change and the floods in Pakistan. It is difficult to establish long-term trends because data on the future does not exist. Past trends are no longer the barometer of weather changes happening today. So naysayers can dismiss the impacts easily. That is why climate change, with its uncertain science and even more uncertain impacts, is a game made for polluters. It is difficult to pinpoint cause and effect. It is easy to deny liability.

Two, the world can agree that even if a single event—like the Pakistan floods that drowned a fifth of the country— cannot be ascribed to climate change, there is no doubt that a link exists between such events and climate change. Science explains clearly that climate change will mean more intense and variable weather events, from rainfall to cyclonic typhoons to intense heat and cold. What happened in Pakistan is part of the emerging chain of such events of changed weather.

In Pakistan when I was reading about and listening to discussions on floods several questions swirled in my mind. I wondered if the country had a system to manage robust forecasting to inform its people about coming disasters. Did the country have the governance abilities to reach its flood-hit people and help them cope with the devastation? Did the country learn any lessons from the scale of the floods to change its water management strategies? I wondered if Pakistan or any other country could indeed cope with or adapt to the changed climate.

The discussions suggested that the country’s meteorological department had information about the possible rain events and it did inform policy makers. But could the system foresee the scale of the disaster? Remember there is no written code for such events in these uncertain times. The other open question is if the weather information the department generated, with all its uncertainties, could be communicated clearly to the people who risked rain, landslide and flood. Yet who can predict whether people, even if told to evacuate, would indeed leave their homes and possessions? These are communities that cope with adversities daily. They would not even have a memory of a disaster of such a scale. This was not an annual flood; this was a deluge.

So how should Pakistan and other similarly affected countries—like most of India—develop a robust system of weather forecasting and disaster information? And can they?

How will the country provide immediate relief to millions rendered homeless? Every flood and drought result in a spiral of poverty and destitution. Every disaster destroys years of development.

Pakistan is no different. The country’s media is full of reports on how government will reach people. The country plans to transfer Pakistani Rs 1 lakh (roughly Rs 50,000) to seven million households in two installments for rebuilding lives. It hopes to do this through a smart bank card, which will identify the affected and reach the funds to them. But already reports show the beneficiaries are poorly identified, money is inadequate and not reaching the people. This is not new. All disasters are disasters of poor governance and inabilities to fix delivery systems.

The question is: how the system of disaster relief can be reengineered for an even more vulnerable world? Can it work in extraordinary times, when it fails in the ordinary?

Then there is the issue of better flood management. As I have written earlier in the context of similar disasters in India, we need to relearn land and water management strategies. Pakistan, like India, has much to learn—from not building habitations in flood-vulnerable areas to channelising river water instead of taming rivers within embankments that invariably break or just do not work. But will it learn, and learn fast in a climate variable world?

The answers will determine our future.