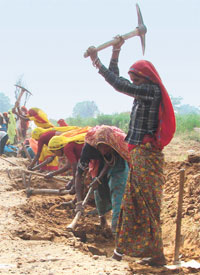 More women than men work under the national programme that guarantees employment to rural people. In the current fiscal till October, women availed of more than 50 per cent of employment created under the Mahatma Gandhi National Rural Employment Guarantee Act (MGNREGA). Their participation has been growing since the inception of the Act in 2006. This is remarkable given that only 28.7 per cent women form a part of the country’s workforce, according to the National Sample Survey Organisation data of 2004-05, the latest such data available for the country.

Women’s participation in MGNREGA points at some unique and often contradicting aspects. First, states not known for women’s participation in workforce are reporting a high number of women joining the programme. Take Kerala, where women account for about 15 per cent of the workforce. Under the Act they take up 79 per cent of the employment created. Two other states, Tamil Nadu and Rajasthan, with low share of women in workforce have 82 per cent and 69 per cent women workers under MGNREGA, respectively. Second, poor states with greater casual labour potential, like Odisha, Uttar Pradesh and Bihar, report low women participation (22-33 per cent). This is contradictory to the assumption that poverty forces women to take up casual jobs. Third, it is believed that states with labour-intensive farming like paddy cultivation pull more women into workforce. The MGNREGA data shows the opposite in paddy-intensive Odisha and West Bengal.

Certain aspects of the Act must be contributing to the contradictory trends. Under the Act, a household is guaranteed 100 days of manual employment in a year. Adult members can share this guarantee and the wage is same for man and woman. This prompts household-level labour budgeting. While men migrate to towns and cities, women are left behind to work under MGNREGA. The Act increases household income since earlier women used to get less wages than men.

Women take up this opportunity as economic freedom. More than wage parity the Act focuses on water conservation. It allows members belonging to the Scheduled Caste and Scheduled Tribe communities to take up work in their own fields and get paid for that. Women participating in the programme are reviving their degraded farms or making provision for water through other works. In Tamil Nadu this trend is pronounced as several local studies have pointed out. In the drought-hit Bundelkhand districts of Uttar Pradesh and Madhya Pradesh, many households have adopted this strategy.

More than 90 per cent of woman workers are farm labourers or cultivators. A substantial part of their work is unpaid because they work in their farms. MGNREGA has changed this. Now parts of women’s non-paid jobs, like land levelling and digging a pond in their farms, are paid for. In drought-prone districts, like Warangal in Andhra Pradesh and Ahmednagar in Maharashtra, community members say this has attracted women to the programme.

In Kerala, Tamil Nadu and Rajasthan, history of women mobilisation for schemes and campaigns seems to have contributed to their higher participation. In Rajasthan, the campaign for social audits, in which women play a major role, has contributed to enhanced awareness and increased participation under MGNREGA. The state’s MGNREGA work sites have good facilities for children and women. In Kerala, ma nagement of work sites and other logistics for implementation is placed in the hands of women self-help groups under the poverty eradication mission Kudumbashree. So most members of self-help groups have joined the programme.

Increasing women’s participation in MGNREGA can be used for effective delivery of its core objective: local ecological revival. It is now mandatory to have 50 per cent woman panchayat representatives who have nodal roles in the programme’s implementation, including preparing the village development plan. So if the supervisory roles in panchayats and the dominant presence as workers converge, it will be a win-win situation for the programme as well as villages.