Hudhud intensifies into a category 1 cyclone

Phailin had intensified rapidly from a category 1 cyclone on this day last year. Will Hudhud follow in its footsteps?

Phailin had intensified rapidly from a category 1 cyclone on this day last year. Will Hudhud follow in its footsteps?

Between Thursday night and early Friday, Tropical Storm Hudhud intensified into a category 1 cyclone, according to the Saffir Simpson Scale  for cyclone classification. It was expected to intensify on Thursday itself but Hudhud neither intensified much nor weakened.

Its maximum sustained wind (calculated using the 1-minute average) remained 60 knot (around 111 km/hr) at the surface. The tug of war between vertical wind shears (which were trying to weaken Hudhud) and other conditions, which were trying to intensify it, seemed to end in a tie. These vertical wind shears relaxed on Thursday night and Hudhud quickly jumped to category 1.
Category 1 cyclones have sustained winds of 119-153 km/hr and have the potential to damage structures, uproot trees and cause extensive damage to power lines.

At 0830 hours IST on Friday, Cyclone Hudhud was hovering at 14.7°N, 87.2°E which corresponds to a distance of about 530 km east-southeast of Visakhapatnam and 570 km south-southeast of Gopalpur in Odisha. The maximum sustained winds, according to the US Joint Typhoon Warning Centre (JTWC), were 65 knot (about 120 km/hr), gusting to 80 knot (about 150 km/hr). The central pressure seems to be 974 mb, according to the US Naval Research Laboratory  (NRL), and the cyclone’s motion has slowed down in the last few hours. 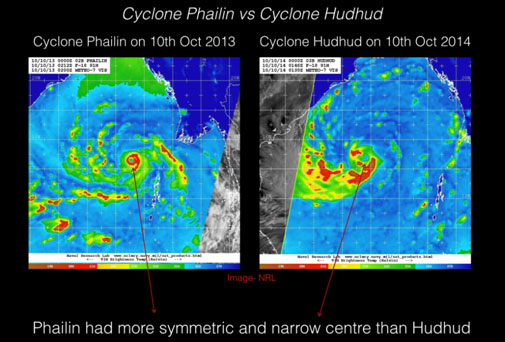 Meteorological conditions continue to be favourable for further intensification of Cyclone Hudhud. The sea surface temperature (SST) around the system continues to be 30°C, thus maintaining the supply of warm, moist air.

The anticyclone (high pressure region), anchored to the north of cyclone, continues to help the winds to move away (diverge) from the centre and maintain an inhalation-exhalation of air inside the system.

Will Cyclone Hudhud follow in the footsteps of Cyclone Phailin?

NRL had forecast Cyclone Phailin as a category 1 cyclone exactly one year ago, on October 10, 2013, and had maximum winds of 65 knot and air pressure of 974 mb on this day. Phailin rapidly intensified later on October 10 and one may think Hudhud would also intensify in the same way.

The image above compares the satellite images of cyclones Phailin and Hudhud. Despite the same maximum wind speed and pressure, their structures are totally different. Phailin was more symmetric and organised (almost appearing like a mosquito repellant coil) whereas there is no such symmetry in Hudhud. It still has a wider centre than Phailin and, hence, it would be improper to expect rapid Intensification. Even the “eye” of Hudhud hasn’t emerged in visible satellite images. Cyclone Hudhud shall steadily intensify today, maintaining the category 1 status and it can be expected to intensify to a category 2 cyclone by tomorrow morning.

From the afternoon of Saturday, October 11, severe weather conditions (strong winds, heavy rainfall, and storm surge on the beaches) will develop in the areas around Visakhapatnam and Srikakulam and will persist till the night of Sunday, October 12. Landfall should happen during the early hours of October 12. Cancellations of flights/trains operating from these areas will be likely from the evening of Thursday, October 11, with a complete disruption on October 12.

Post-landfall, heavy rains will be witnessed in interior Andhra Pradesh, Telangana, all of Odisha, Chattisgarh, eastern parts of Maharashtra and Madhya Pradesh.