People do not know about tiger behaviour. They drive the animal to aggression

Recent incidents of tigers straying pose a new challenge in conservation. It's a challenge not just for wildlife managers who have to ensure survival of the species in its natural habitat, but also for the common man who has to evade an unknown animal.

Young male tigers do stray though not more than a few kilometres outside the forest. But, the young tigress that reached Rudauli and Kumarganj forest ranges in Faizabad forest division from its original home in Pilibhit forest in Uttar Pradesh was a special case. She had travelled almost 200 km across the human dominated agricultural landscape, taken refuge in sugarcane fields on her way, followed the route along nullahs, canals and crossed the Gomti river before reaching the 10 sq km forest patch in Faizabad forest division.

People who spotted the tigress did not give her way to return home. Unaccustomed to the animal they tried to chase it away. A tiger once lived in the same area, but that was more than 50 years ago.

Obviously, the villagers had no clue about the animal's behaviour. I met several elderly people who tried to convince me they could kill the tigress using harpoons mounted on an eight-feet long bamboo stick. They argued that they had killed several wolves with the same weapon. Some even had the idea of using fishing nets.

The forest department distributed pamphlets and deployed staff in the villages close to the forest to ensure the villagers avoid any encounter with the animal. People were requested not to venture into the forest alone. However, a few villagers did venture inside the forest alone and stayed there till late evening--the time when tigers hunt. Two of them became the tigress' victim. The animal ate a part of one dead body. However, nobody knows what drove the tigress to kill humans.

These incidents increased public resentment and the tigress was declared a maneater. People tried to make life miserable for the animal. They stole its kill, making the hungry tigress kill an animal in a nearby village--this increased local outrage. The tigress was ultimately shot dead on February 24. 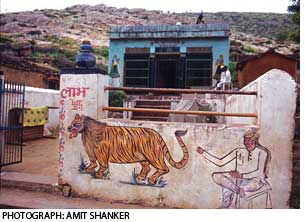 There are lessons in all this. Officials in forest ranges must be trained to stop an animal from straying far. In case, an animal does stray, range and divisional forest offices must be given manpower and logistical support. Forest departments must establish a dialogue with local people. The problem can be nipped in the bud if people living in villages near tiger habitats do not drive the animal away from the forest.

But these are contingency measures. A long-term strategy is necessary to ensure that episodes like the one in Faizabad do not recur. The plan must be to increase people's tolerance levels.

Let me cite an incident from Faizabad. Residents of a village in Kumarganj forest range were agitated after spotting tiger pugmarks in their fields. They became so afraid that in torchlight, the eyes of nilgai, chital or jackal seemed like that of a tiger. People started bursting crackers on the forest boundary making the animal restless.

The authorities were sensitive to local fears. They asked what should be done to ensure their safety. The people demanded uninterrupted electricity supply during the night. The demands were met and the local anger subsided.

In the earlier case, the tigress was declared a maneater, even though circumstances drove her to kill humans. In such cases, there is a need to build up the image of the animal through proper communication strategies.

Samir Sinha is at Wildlife Trust of India's field station at the Valmiki Tiger Reserve,West Champaran, Bihar. The views expressed here are his own