In defence of ostrich farming 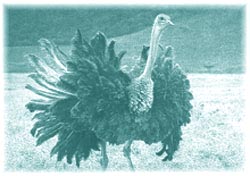 despite the farming of ratites (ostrich, emu, cassowary) proving to be a lucrative business the world over, the same does not hold true for India. The government's attitude has not been very helpful in encouraging and developing the farming of these birds. In fact for the want of an import license ostrich farming in the south languishes at the planning stage.

T he popularity of the scheme can be judged from the fact that presently 65 countries, including our neighbours Pakistan and China, are engaged in ratites farming. The birds require very little care and are in great demand as table birds.

In the 1970s, the government promoted the farming of the Japanese quail through the Indian Avian Research Institute at Izatnagar, Uttar Pradesh. As a result, thousands of farmers are today earning their living through quail breeding and its broiler market.If a similar policy was followed with regard to ostriches, many impoverished farmers would profit.

Three years ago, in Bangalore, some farmers got together and formed an association called the Forum for Technology on Ostriches, while in Andhra Pradesh, they instituted the Indian E mu Association. But, even after organising themselves, they have been unable to import ostrich chicks for want of an import licence from the director general of foreign trade. Although the ministry of commerce has sanctioned a licence for import of horses (mainly used for racing, which tantamounts to gambling), it has refused to issue one for import of ratites. It has ignored the fact that the latter will provide valuable employment to many farmers, especially in the drought-prone, low rainfall and desert regions of the country.

As of now, only some Andhra Pradesh farmers, who were able to import emus, have benefitted from farming of ratites. The state now boasts of 22 emu farms. Some reasons why ostrich and emu farming should be encouraged in India:

l Plenty of infertile and barren lands throughout the country which suit these birds. All drought-prone districts in Andhra Pradesh, Tamil Nadu, Karnataka, Madhya Pradesh, Maharashtra, Gujarat, Uttar Pradesh and Rajasthan are appropriate for farming of ratites. The farmers who own such land will be gainfully employed.

l The chick grows to slaughter weight in only 10-12 months. As adults they lay around a hundred eggs per year and have a lifespan of 30 years. Besides, there is a ready market with a high price for such low fat, low cholesterol meat.

l These birds have a very high feed conversion ratio, that is, they eat very little compared to animals which provide red meat such as goats and sheep.

l Ratites provide very valuable oil, which is used by the cosmetic industry.

l Ostrich and emu skins are considered "exotic" and sell at a very high price. The skins are currently being imported for making leather goods.

Despite these advantages, the Indian government is steering clear of encouraging ratities farming because it believes that the imported chicks could introduce diseases, which might affect other animals. More importantly, the government thinks it could prove to be a foreign exchange drain.

But these fears are without any grounds. The ratites will be imported only from export farms which meet quarantine, vaccination and other health standards. Further, when other animals such as goats, sheep, horses and cows, can be imported, why not ratites? The ratites will go through the same strict checks before entering the country. So any fear of new diseases being introduced in the country is unfounded.

The maximum foreign exchange likely to be spent in one year will be equivalent to importing a few foreign cars. The landed cost of a chick is us $100-200. After a few years, when farmers start ratites breeding, no more imports will be required.

Many big farmers and corporate houses are willing to import chicks and sub-contract it to small farmers. The companies will buy back the birds at slaughter age. This could prove beneficial to both the parties involved.

The author is a freelance writer based in Calcutta