In Search of the Forgotten Rice Varieties

If the current trend towards genetic uniformity in rice varities continues, our food security will be severely imperilled 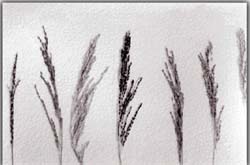 A series of ingenious selective breeding experiments carried out over the millennia by generations of unknown farmers in the Indian subcontinent have enormously expanded the genetic diversity of the Indian rice, Oryza sativa var. indica. This diversity is embodied in thousands of varieties of rice, also called landraces.As a result, we now have a multitude of rice breeds adapted to different types of soil conditions -- dry upland, inundated lowland, rainfed medium land -- and to climatic vagaries: drought, late rain, early rain, too much rain, excessive cold, and so on.

When I began cataloguing this diversity of folk rice landraces, I found that the modern agriculturists failed to appreciate the role of peasant farmers in expanding crop genetic diversity -- a feat which evolution could not have done in just a few thousand years, which is a considerably short time-span on the evolutionary scale. They also overlook the science of selective breeding our farmers have developed, as well as ignore the multitude of traditional farming techniques that are eco-friendly and sustainable.

The basis of this ignorance needs scrutiny. Current research reveals that the historical root of our environmental crisis is the Western viewpoint borne of European enlightenment, which nurtures a conceptual dichotomy between nature and the human world. Trained in this mindset, most Indian pop conservationists believe that human activities are generally construed to spoil the purity of nature. They hold that people, including the "ecosystem people", exist outside nature, a notion which the informed conservationist movement repudiates.

The fallacy of this ideology may be instanced by the ban on buffalo grazing in Keoladeo Ghana National Park. The composition of the vegetation in the Park, which attracts so many waterfowl species, is now known to be a result of grazing of buffaloes by the local people over the centuries. When this grazing was banned a few years ago by a rash administrative decision to protect the park from graziers, the wetland was choked up by weeds and turned into an unfavourable habitat for nesting birds. Revoking the ban saved the sanctuary.

An important point which is often missed by conservationist is that many species have co-evolved with humans, and the population dynamics of many wild organisms are tuned to the life history of the domesticated plants on which they depend for survival. A prominent instance is the population upsurge of the many insects just before, or at the time of, the rice harvest. The festival of Diwali was originally meant for controlling these pests at the harvesting season by using fire as light traps all around. The emergence of pests is, in turn, linked with that of their predators like the tiny parasitoid wasps, and their life cycles are governed by that of the cultivated rice plant.
Until the advent of the Green Revolution, over 42,000 folk landraces were recorded to have existed in India. The aggressive advertisement and marketing of modern high-yielding varieties ( hyv s) promoted by national and international agencies have, since the late 1960s, systematically pushed most of the folk crop varieties to extinction.

The replacement of the folk varieties with hyv s is continuing, even in the arid districts of Bankura and Birbhum. Farmers have installed shallow pumps for irrigation to grow hyv rice, and abolished almost all old indigenous varieties through disuse. When I started documenting folk rice varieties back in 1994, Kelas was fairly popular in the district of Bankura. Today, Kelas is preserved only in a dozen upland farms, whose owners are too impoverished to buy the costly "inputs" necessary for hyv cultivation. This is happening everywhere in India. The unique twin-grain rice variety, Jugal, is today being grown by perhaps just one farmer in the entire eastern India.

For an estimate of the extent of our loss of folk rice varieties, let us assume that about 20 per cent of the country's land is currently under indigenous rice varieties -- a majority of them being rainfed, upland farms owned by poor and marginal farmers. The number of upland and dryland folk rice varieties that may still be extant would be no more than 1,200. Being optimistic, let us assume that a total of 2,000 folk varieties are still being cultivated in small farms all over the country, and that means we have lost more than 95 per cent of our wealth of old folk landraces.

What will happen with the extinction of these varieties? To put the answer very concisely, the gene pool of the Indian rice plant will be highly endangered.A recent study indicates that extinction of populations may lead to species extinction, and the more populations pushed to extinction, the faster the doom for the species. The simple logic underlying the scenario is that if a species' genetic variability is diminished, its ability to evolve in response to the changing environment will be proportionately restricted. Hence the likelihood of its extinction is enhanced. Considering the disappearance of 95 per cent of rice variety populations, and the consequent loss of genetic variability, you can now estimate the magnitude of the impending risk to rice as a species.

With the millions of rice plants growing in paddy fields, rice cannot be declared an endangered species in the near future. Yet, if the current trend toward its genetic uniformity continues, our food security will be severely imperilled. Homogenisation of rice through hyv monocultures would entail that a single disease or pest outbreak will ruin all crops in the field, just as a single disease agent caused the Irish potato famine.
A large number of organisms like earthworm, millipedes, wasps, ladybirds and spiders, occurring in the rice agro-ecosystem, are beneficial to the rice crop, and there are no straightforward ways of calculating the value of the biodiversity that is destroyed by chemical fertilisers and pesticides. Nor can one directly estimate the losses due to the change in soil structure owing to overuse of chemical fertilisers, change in the water table due to withdrawal of groundwater, and the increased health costs due to consumption of poisonous agrochemical residues in food crops and drinking water. Since none of these calculations are made, the idea of profitable cultivation of hyv s gets widely diffused among the population.

This year, the district of Bankura received scanty rainfall; which arrived too late. In most of the district, a severe crop failure resulted, because unlike the folk varieties, hyv rice is all too dependent on timely water supply. A rain too early or too late is enough to destroy the crop. Farmers came in flocks to our seed exchange centre begging for just five kilos of any folk variety rice seeds that would have sustained them in this drought -- the seeds they had abandoned for short-term gains. However, the late rains served to drive home the lesson .
There are two ways to conserve genetic diversity of rice. Evanescent crop varieties can be stored ex situ, or away from the farm, in seed banks or gene banks where seeds are stored in "deep freeze". Agricultural scientists can then test, identify and isolate, different traits from the seeds, which, in turn, could be incorporated into new breeds. In situ , or on-site conservation, on the other hand, requires that seeds of the varieties to be conserved aregrown and multiplied on farms, where the desired traits can be refined through adaptations to changes in the natural environment.

To the average farmer, however, ex situ gene banks are, as a rule, esoteric and out of reach. Gene banks hardly ever provide farmers with the seeds varieties they want. Instead, gene banks exploit the seeds collected from farmers to produce hyv s, which are immediately usurped by a handful of multinational firms for sale to the farmer. Very often, the hyv seeds are sold to the farmer as a component of a package which includes a set of chemical fertilizers and pesticides, and a blanket prescription as to how and how much to use. And the folk variety seeds get lost in the process.

A local ex situ seed exchange centre that promotes in situ conservation could solve this problem. One such seed exchange centre has been established this year in Bankura district of West Bengal. Funded and supported by Navdanya, New Delhi, the centre is named Virhi Beej Binimoy Kendra, which is the first of its kind in eastern India ( virhi is the Vedic name of rice). The centre now has a collection of over 180 accessions of folk rice variety samples collected from the districts of Bankura, Birhum, Medinipur and Purulia. These are the districts where, my survey data suggested, the largest number of folk rice varieties extant in the state would be found.

Debal Deb is an aquatic ecologist and works on biodiversity conservation