68th Round of NSSO makes it amply clear that the wave of economic growth has not percolated down from the 0.003 per cent of population of ruling elite and 99.996 per cent population is spending between just Rs 25.90 and Rs 37.36 per capita per day in rural and urban areas respectively

68th Round of National Sample Survey makes it amply clear that the wave of economic growth has not percolated down from the 0.003 per cent of population of ruling elite (as per Income Tax records, only 42,800 persons have taxable Income more than Rs 1 crore in India). 99.996 per cent population is spending between just Rs 25.90 and Rs 37.36 per capita per day (average MPCE) in rural and urban areas respectively

India's much-vaunted economic growth story is a little hard to digest if one were to closely scrutinise the results emanating from the 68th round survey of the National Sample Survey Office. The survey carried out during July 2011-June 2012 reveals some alarming facts about how little money people have to spend on food, nutrition and health. If our society is truly growing economically, as claimed, and the state is withdrawing from its role in very basic social and essential sectors like education, health, transportation and nutrition, one would assume that expenditure on these services would have increased. But data shows expenditure on food has decreased proportionately over a period of time; at the same time overall expenditure is also not showing any impact of economic growth. This report gives a statistical base to the assumption that economic growth has maintained huge inequality in per capita expenditure on very essential needs such as food, health and education. The level of inequity is very-very high on in the context of per capita expenditure on education and health.

On education, the bottom 5 per cent population in rural India is spending just Rs 7.54 per month whereas top 5 per cent in urban India is spending a 120 times higher amount of Rs 908.12 per month. This disparity is one of the reasons why the largest section of the society, the poor, is denied Right to Education with quality. The spending difference on medical expenditure in these two categories is 40 times. Just to inform you on expenditure levels for availing conveyance services, the top 5 per cent population in urban India spends 116 times more than the bottom 5 per cent rural population. Even today, the average Indian is struggling hard to get right to quality education and basic health services and because of uneven growth they not able to spend on it. It also indicates that withdrawal of the state from essential sectors is really causing distress in almost every segment of society. 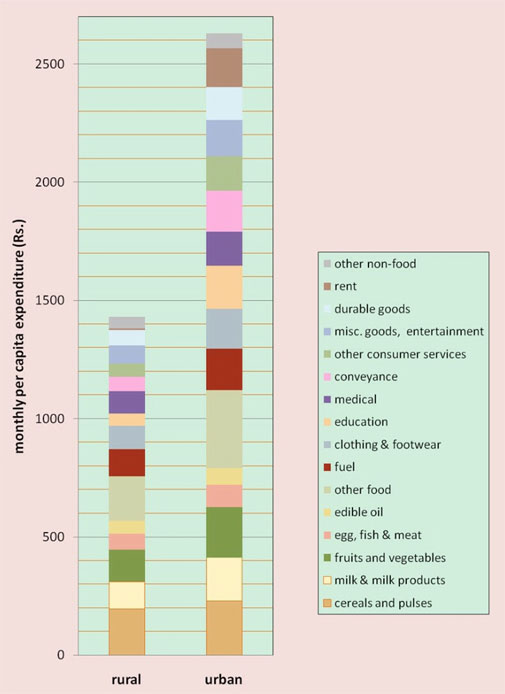 The Household Consumer Expenditure Surveys of the National Sample Survey (NSS) are the primary source of data on various indicators of level of living, pattern of consumption and well being of households at the national and state levels. These indicators feed planning, policy formulation and decision support and are used in analytical studies by government, research agencies and the academia. These surveys with a large sample of households have been conducted quinquennially from the 27th round (October 1972-September 1973) onwards. This article draws upon the results emanating from the NSS 68th round survey carried out during July 2011-June 2012, which was the ninth quinquennial survey in the series.

The survey aims at generating estimates of household monthly per capita expenditure and its distribution, separately for the rural and urban sectors of the country, for states and Union Territories and for the different socio-economic groups. According to the statement of Union Ministry of Statistics and Programme Implementation, “The estimates of average MPCE and its break-up over consumption items—14 food groups and 16 non-food groups—are provided separately for rural and urban sectors at the State/UT level as well as across all India fractile classes of MPCE. The fractile classes are mostly decile classes. Thus, the first decile class comprises the bottom 10 per cent of the population in terms of MPCE and the top (10th) decile class comprises the top 10 per cent of population. However, the first and 10th decile classes have each been further split into two equal-sized fractile classes.

The report on “Key Indicators of Household Consumer Expenditure in India – 68th Round of National Sample Survey reveals that the estimate of average MPCE was Rs 1,430 for rural India and Rs 2,630 for urban India. Thus, average urban MPCE was 84 per cent higher than the rural MPCE for the country as a whole. 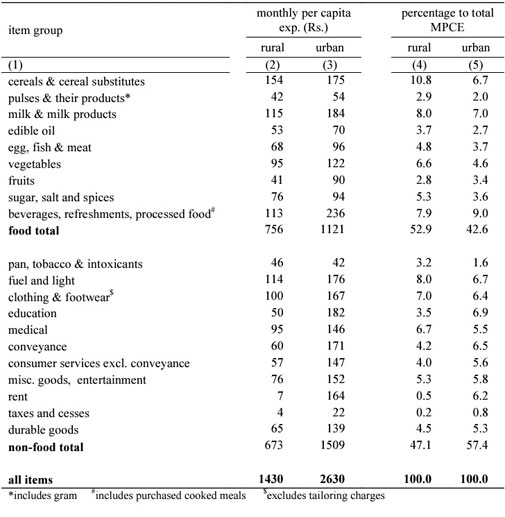 Notwithstanding the percentage differences being subject to greater errors of estimation and the fact that urban price levels are generally higher than the rural price levels, it is rather clear that states vary widely in the degree of the rural-urban gap. Notably, urban MPCE is double the rural MPCE in West Bengal and Jharkhand, and 93-97 per cent higher than rural MPCE in Maharashtra, Karnataka and Odisha. The gap is relatively narrow in Rajasthan, Andhra Pradesh and Tamil Nadu (about 53-55 per cent), Bihar (34 per cent) and Kerala (28 per cent) and lowest in Punjab (19 per cent).

In the urban sector, the state-level food share exceeded the all-India estimate of 42.6 per cent by as much as eight percentage points for Bihar, five for Assam, four for Jharkhand and three for Odisha. Kerala, again, had the lowest food share among the major states (37 per cent) followed by Haryana (39 per cent) and Karnataka (40 per cent).

In the urban sector, the major states with the highest share of expenditure on cereals were Bihar (over 12 per cent) and Odisha, and Jharkhand and Assam (10 to 10.5 per cent) against the all-India average of 6.6 per cent. Haryana had a share of 3.7 per cent and Kerala, 4.6 per cent.

Share of different food and non-food groups in consumption

Food accounted for about 53 per cent of the value of the average rural Indian’s household’s consumption during 2011-12. This included 11 per cent for cereals and cereal substitutes, 8 per cent for milk and milk products, another 8 per cent on beverages and processed food, and 6.6 per cent on vegetables. Among the non-food item categories, fuel for cooking and lighting accounted for about 8 per cent, clothing and footwear for 7 per cent, medical expenses for 6.7 per cent, education for 3.5 per cent, conveyance for 4.2 per cent, other consumer services for 4 per cent and consumer durables for 4.5 per cent.

Trends in pattern of consumption

Over the same period, the share of durables has increased from about 3 per cent to 6 per cent of MPCE in both rural and urban sectors, and the share of fuel and light shows a rise of about 2 percentage points in the rural sector and 1 percentage point in the urban. The “miscellaneous goods and services” category (including education and medical care) is, of course, the group which has grown the most—from 17 per cent of total expenditure in 1993-94 to 26 per cent in 2011-12 in rural India and from 27.5 per cent to nearly 40 per cent in urban India.

For the past two decades, our government has been obsessed with singing just one tune—8 per cent, 9 per cent and 10 per cent growth in Gross Domestic Product (GDP). It has been mighty pleased with a self-fulfilling prophecy pertaining achievement in growth rate! However, it is the process of its translation in terms of real value that accrues to the households at the societal-level which counts. And, by all accounts, it is no mean task.

Apparently, the easy exercise for the government has been to perceive the transactions of sales and purchases in monetised form when it comes to interpreting GDP. Any attribute that doesn’t carry a money value is of little relevance to the concept of GDP!

Accordingly, in one way of looking at things, the economic growth could be described to be highly impressive. However, a deeper and more sensitive insight in to the data would show that the growth has rather been garnered by a “very special class” of 100 families in this country who have net worth of Rs 70,50,000 crore GDP for 2012. In the second rung of this ladder, India has 42,800 persons having taxable income of more than Rs 1 crore who were also levied a surcharge of 10 per cent. Next to this, we witness a sharp decline of rich people. In a sense, India has only 42,900 (including 100 top shots) rich people or rulers of new India to be more precise! The wave of economic growth has actually not percolated down from the 0.003 percent of population. It is this yawning chasm which has created new levels of inequality, where 99.996 per cent population is spending between just Rs 25.90 and Rs. 37.36 per day across the rural and urban spectra respectively. Is it not a bemoaning situation for a nation?

Regrettably, the so called economic growth has in effect cast a gloom of economic insecurity and it has rendered the large population of the country incapable of spending enough even to meet its most basic and essential needs. It results in shameful indicators of social development, whether they pertain to lowering of unacceptably high Infant and maternal mortality or completion and scholastic achievement in education. The rising class conflicts and widening gender disparities ring the alarm for securing real inclusion of the people before it gets to too late. The call to action for preserving comprehensive human development resting on the principles of equality is here and now. 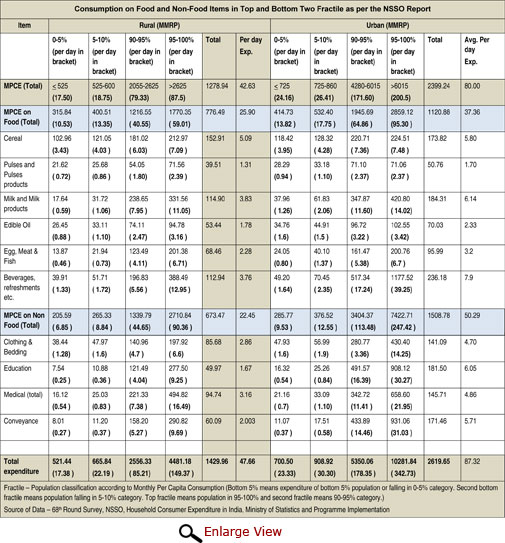 Sachin Kumar Jain is an activist and researcher closely associated with Right to Food Campaign. He is Secretary with Vikas Samvad Human Development and Food Rights Resource Center