Internet sceptic? Go get a life

Fifty years down the line, generations will laugh off the paranoia about the Internet

If there is one thing the Internet can claim uniqueness for, it will be for the fact that never in human history has a technology been charged so much with being the object of obsessions, compulsions or psychological disorders. We have never really heard of a print addict. We do have bibliophiles and cultural gurus. The camera has been duly appointed the most effective form of preserving memories. Its presence at all occasions, or even in the ordinarily mundane, has been accepted as a protocol. Photographers might spend days in dark rooms and morphing memories for posterity but we haven't yet heard of a camera addict who needs a rehab.

How does the Internet, then, achieve this dubious status of being heralded for generating the Internet Addiction Disorder? The term, coined as a hoax by Ivan Goldberg as a satirical comment on the easy 'disorder-isation' of practices by contemporary psychiatry, has unfortunately ended up becoming what it critiqued: pointless, devoid of meaning, and backed by questionable research and studies by groups with vested interests.

What is the Internet Addiction Disorder? The first set of answers that list physiological descriptions such as dry eyes, carpal tunnel syndrome and repetitive stress injury shall be summarily dismissed because these are not specific to the Internet. They are associated with lifestyles, postures and lack of awareness among the users about their physical engagements with technology but cannot, in any way, be a part of the psychological disorder under scrutiny.

So, ask the question again. The answers we get are: gambling, watching pornography, inappropriate time spent on social networking and email, chronic dependence for information, shopping beyond limits, excessive gaming and recreation online and neglecting different parts of life, and work. The list continues, but leaves us slightly baffled.

Surely critiques must know people used to gamble--we have made a nation of TV audience watching people gamble their lives, dignity and relationships on the camera--way before the Internet. Are they naive enough to think pornography and adult sex industries were lying low before the Internet came into play? In the increasingly urbanized spaces that we occupy, the need for social networking is inversely proportional to the reduced mobility, time and spaces of social interaction. In such cases, social networking is a tool that fulfils the human need to know we are not alone. 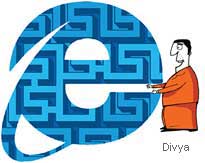 Anybody who is making claims about the Internet leading to excessive shopping is confessing they haven't been around since plastic money was invented. And if somebody is avoiding responsibilities, it is a problem that will persist with or without the Internet.

The Internet is only a gateway to these and other interesting (and sometimes disturbing) cultural products, trends and fashions. We have never called for banning print as a technology because people use it to publish sexual material. The TV is going strong with celebrities gambling their lives and choosing spouses in front of an audience. Digital cinema and portable media devices have ensured that movies can be seen almost anywhere.

The fact is we depend on technologies of the time. These technologies, like the Internet, offer us possibilities and potentials for expression, cultural production and dissemination, information and communication, and each technology has its own inherent potential for abuse. The anxiety about technology is not new. Carolyn Marvin's fascinating account, When Old Technologies Were New, shows how the telephone was supposed to make our children more furtive, our women more gossipy, our men more promiscuous and our society more detached and less civil.

The editor of a Philadelphia newspaper in 1894 had cautioned his readers "not to converse by phone with ill persons for fear of contracting contagious diseases." Ridiculous as it sounds to us who have grown up with universal telephone technology, these concerns were grave and important to the people in those early days of telephones. Fifty years from now, generations are going to look at the contemporary paranoia around Internet addiction in a similar way and wonder what the fuss was all about.

Nishant Shah is director (research) at the Centre for Internet and Society in Bengaluru. It seeks to engage with the emerging Internet technologies and their role in the South's information societies