Are religious pilgrimages only about faith and religion?

It is difficult to comprehend the motivation that drives hundreds of thousands of people to travel to the Western Ghats and camp deep inside the Kalakad Mundanthurai Tiger Reserve (KMTR) for 11 days during Adiamavasya. The festival is celebrated at the Lord Sorimuthu Iyyanar temple every year in the Tamil month of Adi (mid-July to mid-August).

For many, a deep religious sentiment brings them here, year after year. Some pilgrims walk for more than 50 kilometres to the temple carrying a hereditary spear to seek blessings of Lord Sorim uthu Iyyanar. After the festival, they keep the spear, called Valayam, in their village temple until the visit next year. Another event is a ritualistic performance by descendents of warriors in front of the former zamindar in a customary durbar. One of the performers told us that once he did not take part in the festival, and he lost someone in the family that year. Since then he has not missed performing at the festival.

But we found it difficult to fathom that faith can be the sole driving force behind such a large congregation inside a tiger reserve. Being part of a team of mostly biologists, we were trying to understand the adverse impact of such a gathering on the fragile dry evergreen forest ecosystem as well as on people living downstream.

Although popular for the Hindu deity, we observed that people from other religions were also attending the festival. Over 76 per cent of the people we interviewed said they took part in other recreational activities like cruising in the dam reservoir during their camping days. We realised that for many lowincome families from the hot, dryland villages bordering KMTR, a visit to the festival was a cheap and viable alternative to expensive hill stations such as Udhagamandalam or Kodaikanal. For others, the festival was an occasion to escape from the mundane chores of everyday life. It also provided an exciting freedom for young girls and boys. During an interview, one young girl told us that there was no family restriction to talk and mingle with boys during the festival. Unsurprisingly, many matches and weddings are formalised and finalised during the festival. Notwithstanding the colourful details and sentiments associated with the festival, we took an unambiguous moral high-ground when we started our engagement with the festival. This led us to assume that although religious, the fallout of such a gathering should be opposed since the temple was situated inside a sanctuary reserved for tigers and their habitat.

Spread over 895 sq km, KMTR is the southernmost habitat of Bengal tiger and is home to several endangered species. Several streams originate in KMTR, for which the protected area is popularly known as the water sanctuary. The temple premises spread over 21.3 hectares by the banks of the Karayar, a tributary of the Tamirabarani river, which is a critical source of water for the densely populated downstream districts of Tirunelveli and Thoothukudi. 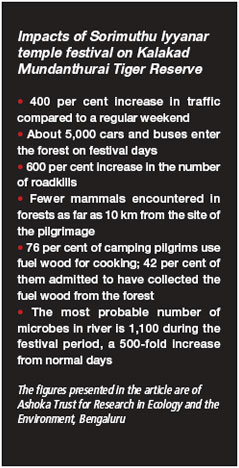 As pilgrims camp around the temple for 11 long days, a large area of the forest gets invaded by thousands of tarpaulin tents. A huge slum-like atmosphere replaces the otherwise clean and green forest. Over the years, the size of the congregation has increased steadily, and so has its impacts. Given the inadequacy of temporary toilets most pilgrims prefer relieving themselves in the forest and on sloping rocks not far away from the camping area where bleaching powder is repeatedly sprinkled to negate the smell and prevent disease. But subsequent rains wash away the human excreta into the Karayar, eventually polluting the Tamirabarani. Chemicals in soaps and detergents used by the pilgrims, polythene, garbage and slaughter waste resulting from the sacrifice of thousands of animals, ranging from sheep to goats to hens, add to the pollution. Not to mention the animal hazards caused by the movement of such a large number of visitors (see ‘Impacts of...’).

“Ivenge oru vaaram sondosamaa thangittu povaange. Naange aaru maasam kashte paduvvom (They stay here happy for a week and we struggle for six months),” rues Ramesh, a Kani tribal who lives in the Agasthymalai Kani Kudiirruppu, a small tribal village few metres downstream the temple. The Kanis originally lived deep inside the forest and were resettled to their current settlement. Their tolerance to pollution is low. Every year, soon after the festival the Kanis struggle for survival for months. In the absence of any other source of clean water, they depend on the polluted Tamirabarani, which results in outbreaks of dysentery, skin rashes and food poisoning. The river takes months to heal. Most Kanis are unhappy with the way the festival is celebrated. For some, however, the festival is an opportunity to earn some cash, otherwise hard to come by, through setting up small shops. Numerous petty traders from the plains join the Kanis and sell articles like bangles, snacks and toys while others sell services such as soothsaying and tattoos. Rights to set up big shops, however, remain with big businessmen from towns. To get a perspective on the economic turnover, we estimated that the camping pilgrims alone spent more than Rs 1 crore in 2010. The figure would double or triple if we include the number of visitors who returned without camping.

Like most festivities, Adiamavasya too has its share of booze and waste. In 2009, the police confiscated over 350 kg of polythene and 450 litres of liquor from the visitors in two days of frisking. Collections from our post-festival clean-up drives suggest that many times more of what is confiscated gets smuggled inside despite the gargantuan measures of the local police, the forest department and local NGOs. 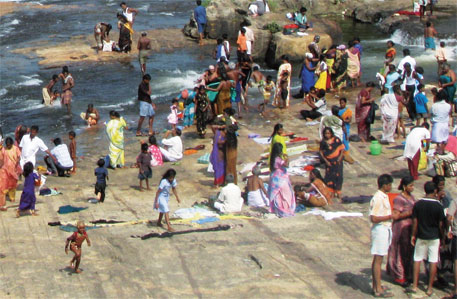 A heartening fact is that some NGOs have joined hands to address the concerns. In 2010, the Madurai Bench of the Madras High Court passed an order asking the forest department to ensure that no one camps beyond the temple premises. Despite the order, the camping and clearing of forest continued, perhaps because it was an issue too sensitive and sentimental to be tackled by the department alone. Any action thus has to be taken up jointly by all stakeholders such as the temple authorities, forest department, district administration, pilgrims and civil society.

The environmental damage caused due to large pilgrimages is a serious issue and our empirical evidence of the annual environmental and ecological damage caused due to the pilgrimage of the Sorimuthu Iyyanar temple at KMTR represents just the tip of the iceberg. Examples abound at Sabarimala in Periyar Tiger Reserve, Belladukuppai in Bandipur Tiger Reserve and Ganesh temple inside Ranthambore. However, our KMTR experience shows it might be presumptuous to view “religious pilgrimages” in or beyond forest areas as solely “religious” and “pilgrimage”. At such a large scale, it represents a far deeper and complicated fabric than what has been popularly perceived and portrayed. Since our responses to problems tend to be devised by our perceptions of them, we urgently need to refine and enrich our engagement with not only our last remaining abodes of biodiversity but also the sacred ones.

Allwin Jesudasan & Rajkamal Goswami are with Ashoka Trust for Research in Ecology and the Environment, Bengaluru