Plastics are everywhere and they are virtually indestructible. The US alone uses 80 million tonnes of plastics in a year—about as much as the marine catch of the world in the 1990s.

Fossil fuels are almost the sole ingredient in traditional plastic manufacturing and the plastic industry takes up about 10 per cent of the output of crude-oil refineries. Fossil fuels provide both the power and the raw materials that transform crude oil into common plastics such as polystyrene, polyethylene and polypropylene. Peak oil theorists estimate global reserves of oil will run dry in about 80 years.

Any guesses how plastic will be produced then?

Plastics can also be produced from starch, a natural polymer. Microorganisms transform this natural polymer to lactic acid, which is chemically treated to produce a plastic, polylactide (PLA). Another way of making biodegradable polymers involves getting bacteria to produce granules of a plastic polyhydroxyalkanoate (PHA) inside their cells.

But this is an expensive method. Going a step further, scientists have taken genes from bacteria and stitched them into corn plants, which then manufacture the plastic in their own cells. However, biodegradable plastic products currently in the market are about two to 10 times more expensive than traditional plastics. Unlike production of PLA and PHA made by fermentation, producing PLA through crops will involve competition for land needed to grow crops for human consumption. Some scientists think growing plastic in corn stover can circumvent this. 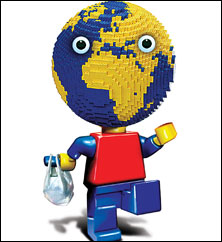 Farmers could harvest the corn grain and then comb the fields a second time to remove the plastic-containing stalks and leaves. The chloroplasts of the leaves have so far shown to be a good location for producing plastic. There is a caveat though. The chloroplast is the green organelle that captures light, and high concentrations of plastic could thus inhibit photosynthesis and reduce grain yields. Using plants that can grow in marginal environments, such as switchgrass, would also avoid competition between plastic production and other needs for land. So, it is now technologically possible to make plastics using plants rather than fossil fuels. But are these new plastics the environmental saviours researchers have hoped for? Biodegradability has a hidden cost.

Fossil fuels would still be needed to power the process that extracts the plastic from the plants. Making plastic from plants depends mainly on coal and natural gas. Some scientists believe this switching from a less abundant fuel (oil) to a more abundant one (coal) is a step towards sustainability. But making a kilogramme of PHA from genetically modified corn plants will require about 300 per cent more energy than what is needed to manufacture an equal amount of fossil fuel-based polyethylene.

The challenges of separating the plastic from the plant, too, are formidable. Extracting and collecting the plastic would still require large amounts of chemicals, which would have to be recovered after use. This processing infrastructure would rival existing petrochemical plastic factories in magnitude.

The success of green plastics will depend on whether researchers can overcome these energy-consumption obstacles economically, and without creating additional environmental burden. It seems today that the environmental benefits of growing plastic in plants is overshadowed by unjustifiable increases in energy consumption, emissions of increased amounts of green house gases and competition of land use for production of essential items for human and animal consumption.

Anyhow, there is lot of wisdom in the oft-repeated solutions. There are many: Banning manufacture of primary and recycled plastic products; encouraging use of reusable containers such as glass bottles for delivery of milk, beverages, soft-drinks and other liquids; use of gunny bags for storing and transport of items such as sugar, cement and jaggery; and using available plastic waste for printing small denomination notes.

S Venkataraman is a scientist in Pune